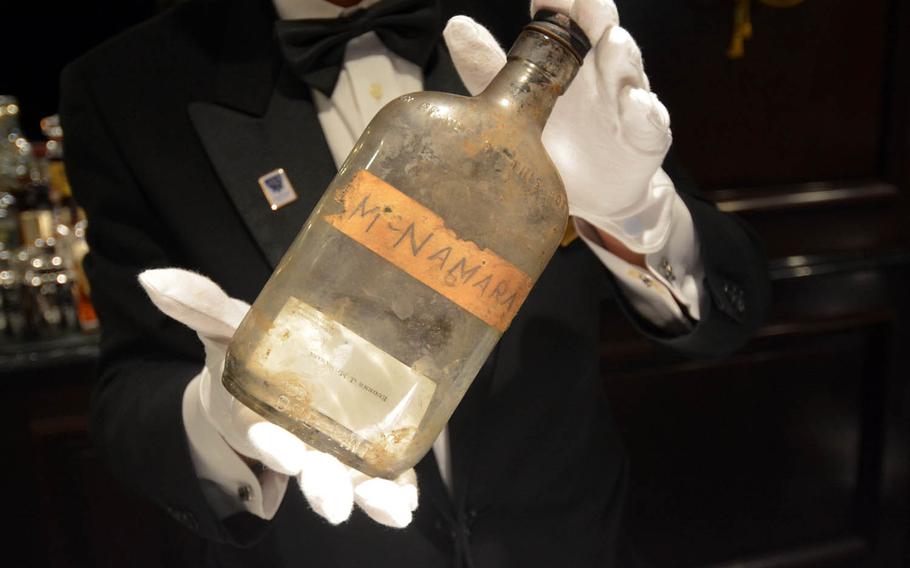 Keisuke Ohta, manager of Bar Sea Guardian II at the Hotel New Grand in Yokohama, Japan, holds the bottle found by construction workers during the hotel's recent renovation. Inside the bottle is the business card for Lt. Col. Eugene J. McNamara, a guest during the post-World War II occupation. The hotel would like to find McNamara's family. (Erik Slavin/Stars and Stripes) Employees at the Hotel New Grand in Yokohama, Japan, say that whomever placed a bottle containing Lt. Col. Eugene J. McNamara's business card inside the ceiling would have gone to great lengths and heights to do it. The ceiling is about 20 feet from the floor, as it was 70 years ago. (Erik Slavin/Stars and Stripes) The view from Yamashita Park of the Hotel New Grand, where Lt. Col. Eugene J. McNamara spent a tour from 1946-48 during the U.S. postwar occupation of Japan. McNamara's room was next to the room reserved for Gen. Douglas MacArthur. (Erik Slavin/Stars and Stripes)

McNamara lived along Yokohama’s harbor beginning in 1946 at the historic New Grand Hotel, which began extensive structural renovations last year, ahead of its 90th anniversary.

If not for the construction, McNamara’s name likely would have faded into history among the hundreds of thousands who served in Japan in the aftermath of World War II.

Shortly after the Shimizu Corp. began strengthening the hotel’s floors and ceilings last year to better withstand earthquakes, a worker found a glass bottle caked with dirt, nestled against an interior beam. There was a business card inside with the following hand-written note in English on the back: “Lived at Grand Hotel Yokohama from 1946-1948 Room 316-317.”

The U.S. took most of its documents after returning control of the hotel to Japan following the end of the military occupation in 1952. The hotel staff had little information about McNamara, but the room number made an immediate impression.

McNamara’s next door neighbor in Room 315 was Gen. Douglas MacArthur, supreme commander of Allied powers and de facto ruler of Japan shortly after the war.

The worker who found the bottle shared it with others, who then brought it to Keisuke Ohta, manager of the hotel’s Bar Sea Guardian II.

Ohta marveled that the old bottle had been placed where it was, survived unbroken for 70 years and not been thrown away by a worker mistaking it as garbage.

“A series of miracles led to the bottle being here today,” Ohta said.

The bottle’s discovery set the hotel staff on a fact-finding mission that taught them a little about McNamara and the history of the post-WWII period. It also presented a mystery: how did the bottle get there?

Like a good detective, Ohta began examining what he had in front of him. The one-pint glass bottle included the following imprint: “Federal law forbids sale or re-use of this bottle.”

The imprint was used post-Prohibition in the 1930s and continued for about 30 years, a sign that the bottle was as old as it appeared.

McNamara’s name, written in pencil on tape, hasn’t weathered after all this time. Above his name are the Japanese katakana symbols spelling out “Maku.” This likely made McNamara a regular at the bar, where a Japanese bartender would have refilled his bottle.

Ohta then contacted the Yokohama city library’s reference room, where an employee found McNamara’s name in a military phonebook at the National Diet Library.

They learned that McNamara was an infantry officer working at the Second Major Port headquarters at Shinko Pier, which is now the site of the city’s Red Brick Warehouse shopping area. McNamara would have helped manage a vast amount of cargo and personnel coming into the port.

McNamara and his wife lived a short distance from the pier at the hotel, along with about 60 officers. Several large tents housed enlisted soldiers in front of the hotel at what is now Yamashita Park, a popular event venue with a rose garden and piers for tour boats.

Ohta can only theorize that McNamara enjoyed his life in Yokohama very much.

“He placed his business card in the bottle, which was something he had used in Japan and had special attachment to, and placed it in the ceiling right under the room,” Ota said.

Workers surveyed his old room. Nothing short of heavy machinery and major construction would have allowed anyone to get through the floor.

What was the main dining hall — now a ballroom — lies under both his and MacArthur’s old suites. The wood-paneled ceiling is 20 feet high, meaning McNamara or whomever placed the bottle there would have had quite a challenge while removing the wood and nails, before replacing it all again.

Much of the hotel’s history was lost during WWII, though assorted prewar memorabilia in English is displayed in the lobby, as is a wartime menu displaying the flags of the Axis powers.

Shortly afterward, diplomats and travelers from the West returned to the hotel for special occasions and several Fourth of July fireworks displays overlooking the harbor.

McNamara’s bottle will be one more addition to the hotel’s collection. But the hotel also hopes that news of the discovery will act as a message in a bottle of sorts to any family he might still have today.

“We hope the story is published by the American media and catches his descendants’ eyes, so they can visit us and see the bottle in person,” Ohta said.