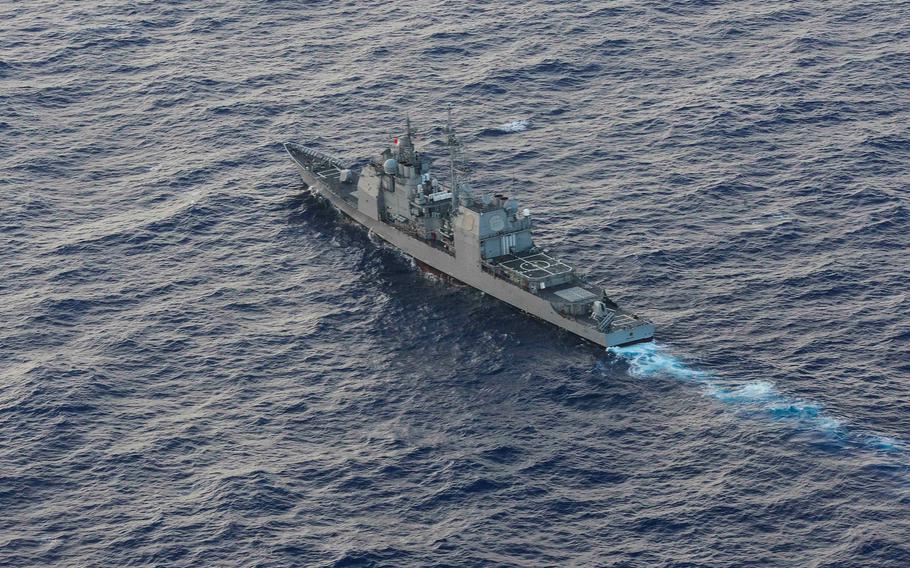 The USS Shiloh in the Indo-Asia-Pacific region on March 23, 2014. (David Flewellyn/U.S. Navy photo)

YOKOSUKA NAVAL BASE, Japan — The Navy and Japan Coast Guard suspended their search at midnight Sunday for a USS Shiloh sailor who officials say likely fell overboard in the Western Pacific this past week.

The sailor was reported missing at about 9:30 p.m. Thursday, while the guided-missile cruiser was conducting routine operations 180 miles east of Okinawa, Japan, a Navy statement said.

Helicopters and aircraft from the Yokosuka-based Shiloh, USS McCampbell, USS Barry, USS John S. McCain and the aircraft carrier USS Ronald Reagan joined three Japanese vessels in the search for the sailor, whose name has not yet been released.

An investigation is underway regarding how the incident occurred. Rear Adm. Charles Williams, commander of Carrier Strike Group 5 and Task Force 70, thanked the sailors from both nations for their search efforts.

"The decision to suspend the search was not arrived at lightly,” he said in a written statement. “Our thoughts are with our lost shipmate, his family, and the officers and crew of USS Shiloh."

The suspended search marks the second loss of a sailor overboard for the Navy in one week.

On Tuesday, Petty Officer Christopher Clavin of the USS Normandy was reported missing while the ship trained off the North Carolina coast. Navy and Coast Guard ships searched for Clavin for more than 76 hours, officials said.