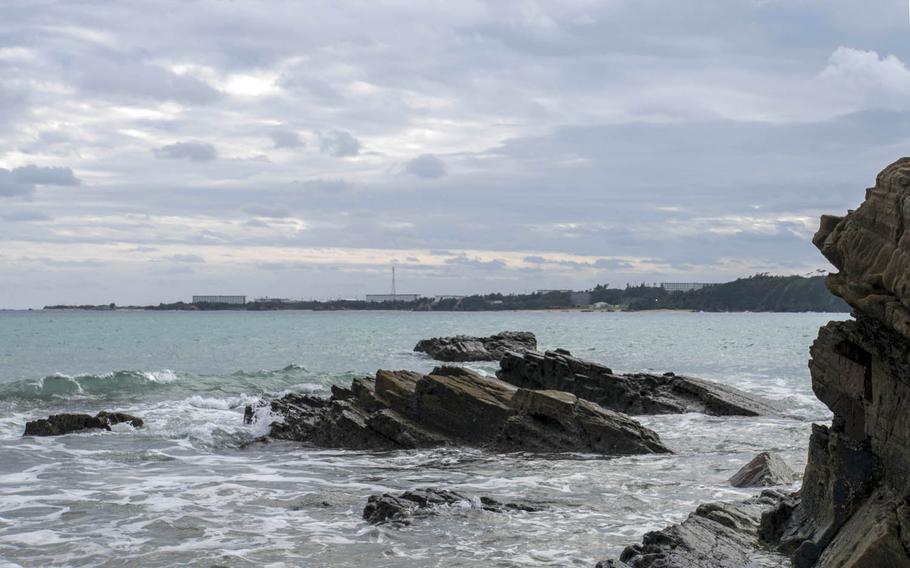 Defense Secretary Jim Mattis and Japan Defense Minister Tomomi Inada have each said that a new runway built over Oura Bay in rural Henoko is the only way forward in realigning U.S. forces in the region, amid increasing tensions with both China and North Korea. (Jessica Bidwell/Stars and Stripes)

Defense Secretary Jim Mattis and Japan Defense Minister Tomomi Inada have each said that a new runway built over Oura Bay in rural Henoko is the only way forward in realigning U.S. forces in the region, amid increasing tensions with both China and North Korea. (Jessica Bidwell/Stars and Stripes) 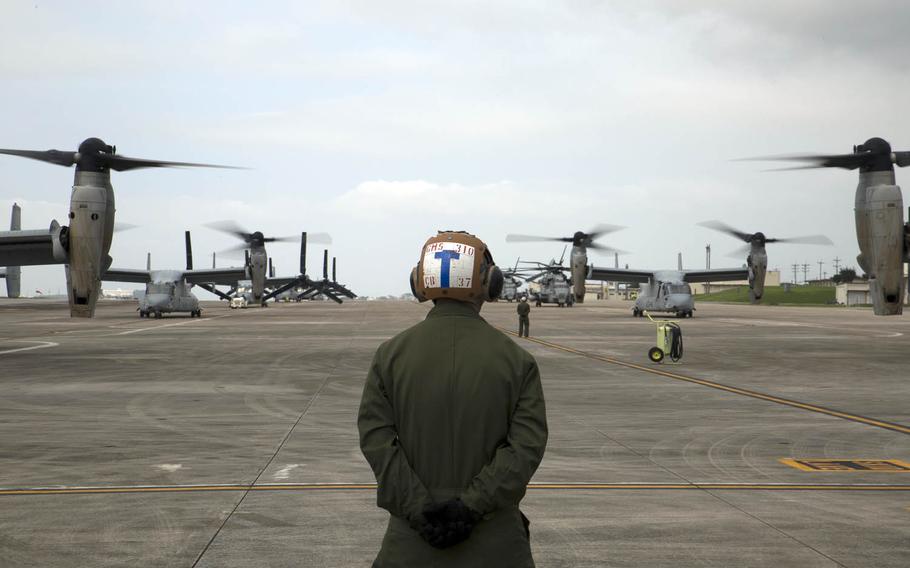 TOKYO — The 31st Marine Expeditionary Unit could leave Okinawa without sacrificing its value as a security provider in the Asia-Pacific, a Japanese think tank said following a study of alternatives to building a new runway opposed by the island’s governor.

It’s a point of view speakers from the New Diplomacy Initiative, a Tokyo-based think tank, conceded wasn’t likely to sway the security establishment, during a press conference Friday.

However, the academics, journalists and a former government defense official argued that plans to build a new runway for Marine aircraft are so unpopular on Okinawa that they risk straining the broader U.S.-Japan security agreement.

Earlier this month, Defense Secretary Jim Mattis and Japan Defense Minister Tomomi Inada each said in Tokyo that a new runway built over Oura Bay in rural Henoko is the only way forward in realigning U.S. forces in the region, amid increasing tensions with both China and North Korea.

The runway would help relocate Marine Corps Air Station Futenma, which is in what has become a densely populated part of central Okinawa.

Okinawa Gov. Takeshi Onaga won election by a substantial majority in 2014 by campaigning to have the replacement for Futenma moved off-island, but courts have ruled in favor of the Japanese federal government’s arguments to move forward with construction.

On Friday, the think tank officials argued that the runway wouldn’t be necessary if the MEU, which includes thousands of Marines in a mix of ground, air and logistics roles, were moved entirely.

“When it comes to the U.S. and China, I think the naval and Air Force presence is most important,” said Akihito Sado, a professor at Chukyo University.

Sado views Kadena Air Base as the most critical part of defense for Japan, which is particularly wary of China’s claim on the Japan-administered Senkaku Islands and increases in nearby Chinese military maneuvers.

Meanwhile, the U.S. military has often stated that Okinawa’s valuable strategic location allows fighter aircraft based at Kadena to arrive in Taiwan very quickly in the event of an invasion from mainland China.

Sado asserted that the runway topic is pushing longstanding issues over the U.S. military footprint, which covers a significant portion of the island of 1.4 million people, to a boiling point. That could lead to popular protests extending to Kadena and the entire U.S. presence.

“We believe that would be a much more serious threat to the U.S.-Japan security arrangement,” Sado said.

They did acknowledge the Marines’ contributions to humanitarian assistance in the region, which has included critical roles in regional disaster relief. Okinawa could act as a “disaster relief hub” for Marines, with Japan picking up the tab for high-speed vessels to bring the Marines there when necessary.

In a region full of countries contesting island sovereignty, the MEU is the only U.S. force in the region capable of staging an amphibious invasion. Japan has plans for an amphibious brigade, but its numbers pale in comparison to China’s.

Furthermore, Japan is just beginning to practice joint operations with its service branches, meaning it will likely be some time before the brigade is combat ready.

The group did not offer a place for its proposed MEU relocation, though one member suggested Guam, Australia or California as possibilities.

Each of these locations are likely nonstarters with the U.S. and Japanese government.

The U.S. realignment plan in the Pacific once called for sending more than 8,000 Marines to Guam, but several factors, including development costs and the impact of sending so many servicemembers to a small island of 160,000 people, led officials to reduce that figure to about 4,000 Marines.

The Marines do rotate troops through Australia and have a large presence in California, but Marine officials have said their presence on Okinawa provides a quick-reaction capability for contingencies over Japan, Taiwan and the Korean Peninsula.

Moving Marines that far would not only lengthen response to conflict, it would separate the Marines from their partners in amphibious operations — the Navy — based on Japan’s mainland at Sasebo Naval Base.

For now, both the U.S. and Japan remain committed to retaining their capabilities on Okinawa, despite opposition.

Failure on the Japanese government’s part to build the runway would signal to American observers that Japan struggles to follow through with difficult political decisions, according to a Congressional Research Service report released earlier this month.

However, ignoring public opinion on Okinawa presents another set of problems.

“The risk remains that heavy-handed actions by Tokyo or Washington could lead to more intense anti-base protests,” according to the CRS report. “Okinawan anti-base civic groups have ramped up their protest activities since 2015, and some groups may take extreme measures to prevent construction of the facility at Henoko.”