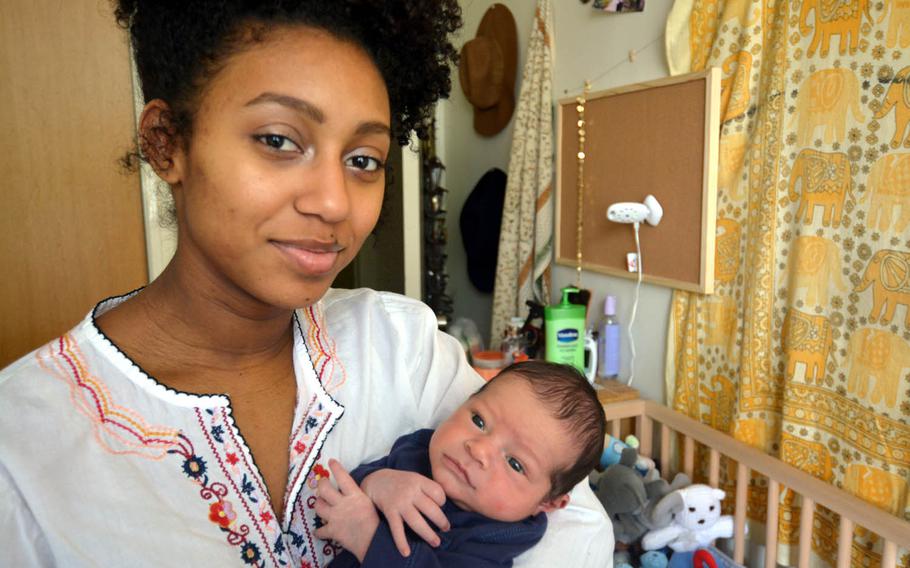 Kayla Germany, 18, holds her newborn son, Dimitri, at her home at Yokosuka Naval Base, Japan. Kayla's father, a Navy chief petty officer, is applying for his new grandson to remain with them in Japan, but the outcome remains undecided. (Erik Slavin/Stars and Stripes) 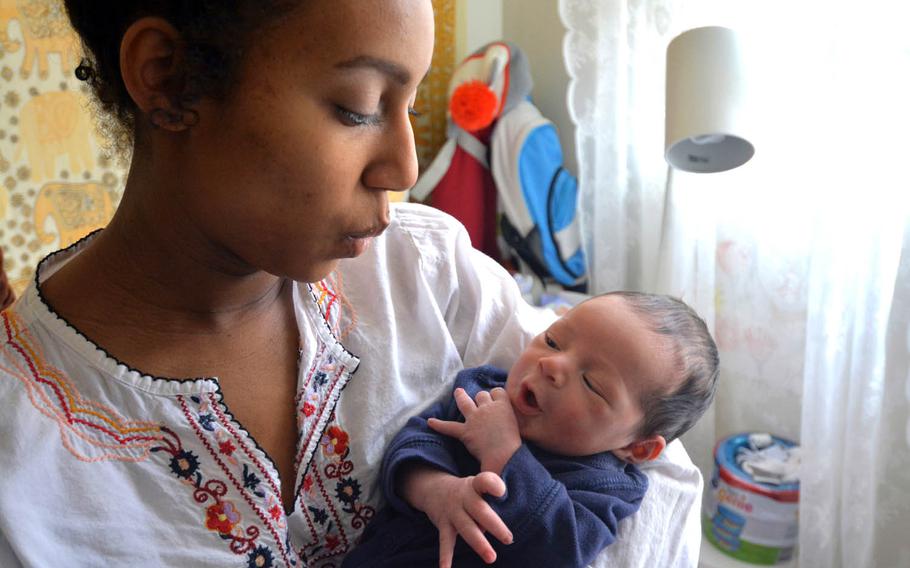 Kayla Germany, 18, holds her newborn son, Dimitri, at her home at Yokosuka Naval Base, Japan. Kayla's father, a Navy chief petty officer, is applying for his new grandson to remain with them in Japan, but the outcome remains undecided. (Erik Slavin/Stars and Stripes)

YOKOSUKA NAVAL BASE, Japan — Kayla Germany took a pregnancy test before heading to her high school softball team practice, just to make sure.

She wasn’t clear about the results, so she went to her mother, Farrah Wilson.

Wilson knew exactly what the positive indicator meant. She had raised her daughter as a young mother, working full time and sacrificing her wants and needs for Kayla’s sake.

Wilson cried at first. But as they discussed how to tell Kayla’s father, Kenya, a chief petty officer at sea aboard the USS Fitzgerald, Wilson’s disappointment began to turn into resolve.

“We have to be with her to help her,” she said. “She has goals in life, and my husband and I will do everything in our power to ensure she becomes the woman she wants to be.”

But first, they had to navigate Defense Department regulations and a complex international treaty that could split the family for a year, until Kenya Wilson’s tour ends.

The Status of Forces Agreement that grants servicemembers visas to stay in Japan covers spouses and children, but it does not include grandchildren.

“Because the newborn child cannot be SOFA sponsored, s/he is subject to the Japanese tourist restriction of 90 days in the country,” a Navy attorney wrote to the Wilsons after a visit in October. “There is an exception to this rule that can be applied directly through the Japanese government … at this point, it is not entirely clear that it would be a successful application.”

Dimitri Germany was born Dec. 18 at U.S. Naval Hospital Yokosuka. He’s healthy and looks a lot like Kayla in her baby pictures.

Dimitri has Kayla’s last name. The boy’s father, a high school student, moved back to the United States before the baby’s birth. There were disagreements about his role during the pregnancy, though he has returned for now to meet Dimitri and help Kayla.

Naval Forces Japan is aware of the Wilsons’ situation. But whether the family can stay together remains unclear.

Yokosuka attorneys laid out several options for the Wilsons, each with a downside.

Farrah and some or all of her three children could return to the United States, leaving her husband to finish his tour alone.

She and her husband could apply for temporary guardianship of Dimitri, which would allow the newborn to be their “secondary dependent.” That would require paying a civilian attorney in Florida, their home of record. It could take months, and even then, there is no guarantee that Naval Forces Japan would grant the baby command sponsorship.

Another option is a grandparent adoption, which would grant command sponsorship. It would legally turn Kayla into her baby’s sister and sever her standing as Dimitri’s mother.

Kayla wouldn’t give up her parental rights. She considered moving back to the U.S. without her parents and siblings, living with a family member and finishing her senior year at a new school.

“I was at the point where I just didn’t want to be a burden to my family,” Kayla said.

Faced with leaving her husband in Japan, Farrah posted her family’s story in a Facebook group for Yokosuka spouses and base personnel.

“I’m so torn,” Farrah wrote. “Please if anybody can help me, please message me … Please pray for our family.”

“When we’re talking about splitting up families … I am not in favor of it in almost any circumstance,” Fahrney said. “It almost never works out well.”

Fahrney has dealt with several unusual family issues that simply don’t exist for servicemembers stateside, due to the complications of overseas command sponsorship.

Earlier in his tour, he heard from several active-duty mothers who weren’t allowed to pick up their children from school, had difficulties getting care at the hospital and couldn’t obtain other services without legal documentation.

The command agreed to sign waivers for the women, because their active-duty spouses were listed as the command sponsor and regulations don’t allow dual sponsorship.

The Wilson case is more straightforward, though the stakes are higher.

While Navy officials have expressed concern for the Wilsons, they are also mindful of allowing too many exceptions.

“We have had a number of folks with dependent status under a single sponsor who would not otherwise, under reasonable expectations, been considered dependent,” Fahrney said. There are more than 300,000 sailors in the Navy, “a good chunk with dependents,” he said. “If that were to get out of control from a DOD perspective, we could find ourselves bankrupt.”

People on base are trying to make things easier for Kayla, who recently turned 18.

Although Dimitri is ineligible for Tricare, the military’s family health insurance program, the base hospital told Kayla that it would provide urgent medical care for him if needed.

Kinnick High School at Yokosuka — where there is at least one other pregnant teen — has arranged for her to complete her coursework through open-block classes, homework and other means.

She said she knows that life will be harder with a child, but she hasn’t given up on her dreams. She wants to enlist in the Air Force after she graduates and adjusts to motherhood. She’s also interested in photography and graphic design, and wants use the GI Bill to pay for her college degree.

For Kayla to enlist and complete boot camp, her grandparents would likely need temporary custody of Dimitri. Temporary custody rules vary between states, but the status is possible in Florida.

The Air Force once barred single parents from enlisting, but now allows them with up to three dependents with an approved waiver. Approval is based on the applicant’s adaptability, potential to perform and conduct, Air Force officials told Stars and Stripes.

Kenya Wilson is waiting for Dimitri’s passport and Social Security card, and is arranging for private overseas health insurance. Once he has Dimitri’s identity and citizenship documents, he can ask the Navy to place Dimitri on his “Page Two,” a document within his personnel file that would list the newborn as a secondary dependent.

He’s been told that the chances for approval are good.

“But you don’t know until you actually get it,” Wilson said.