Staff Sgt. Cierra Rogers died May 20, 2016 in Florida from injuries she sustained in April while rescuing a family from a burning building near Osan Air Base, South Korea. (U.S. Air Force )

The 731st Air Mobility Squadron at Osan Air Base has honored an airman who died from injuries sustained while helping save a family from a burning building.

Staff Sgt. Cierra Rogers died May 20 shortly after arriving at her follow-on duty station in Florida. She was 26 years old. Rogers, who was credited with being the first airman to arrive at the scene, was hospitalized in the days following the April 29 fire in South Korea’s Songtan district and required surgery.

“Let us remember her huge smile and her willingness to help others. While she was here, Cierra enjoyed life, and she truly lived life to the fullest,” Lt. Col. Breanna Fulton, the 731st AMS commander, told the memorial service.

Members of the Enyioko family, who Rogers and other airmen helped rescue, attended the ceremony along with representatives from the Embassy of Nigeria, South Korean government and Lt. Gen. Lee Wang-Keon, commander of South Korean air force operations command.

“Staff Sgt. Rogers’ honorable actions to help those in danger were a true example of what it means to serve,” Lee said. “We highly respect her courageous actions and will forever remember her noble sacrifice.” 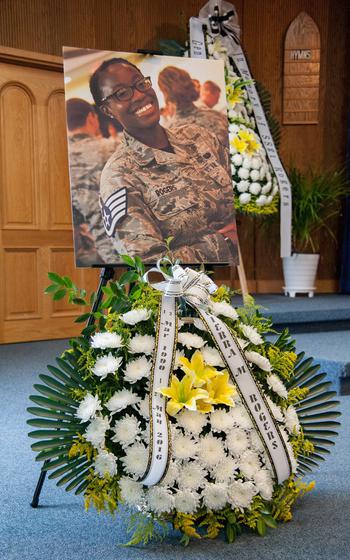 Staff Sgt. Cierra Rogers died May 20, 2016 in Florida from injuries she sustained in April while rescuing a family from a burning building near Osan Air Base, South Korea. (Jonathan Steffen/U.S. Air Force)

The dramatic events were captured on cell phone footage, showing a group of airmen and local residents using a blanket to catch a woman and her three children as they leapt from a window in the apartment building. Rogers initiated the rescue when she entered the smoke-filled apartment to kick out the window and usher the family toward safety.

“This beauty was in the hospital when everyone was being interviewed,” friend Kris Murray wrote in a tribute post on Facebook. “[Cierra] remained calm and told the mom how to breathe in the smoke, then convinced the mom to throw her three babies out the window to safety where firefighters and a few airman and soldiers waited to catch them. Cierra got very hurt in the process while sliding down some wires and kicking a window in.”

Rogers was a native of Dallas. She enlisted in the Air Force in 2010 and spent five years at Joint Base San Antonio-Lackland before serving a year at Osan.

“Cierra traveled halfway around the world to help defend and protect the people of Korea,” said Lt. Gen. Terrence O’Shaughnessy, the Seventh Air Force commander. “While she was here, like so many U.S. airmen, she became integrated into a local community which has welcomed so many of us for more than 60 years. As a member of that community, when she had an opportunity to help people in mortal danger, she didn’t hesitate to act. She set a tremendous example of service before self, one that all Airmen can aspire to.”