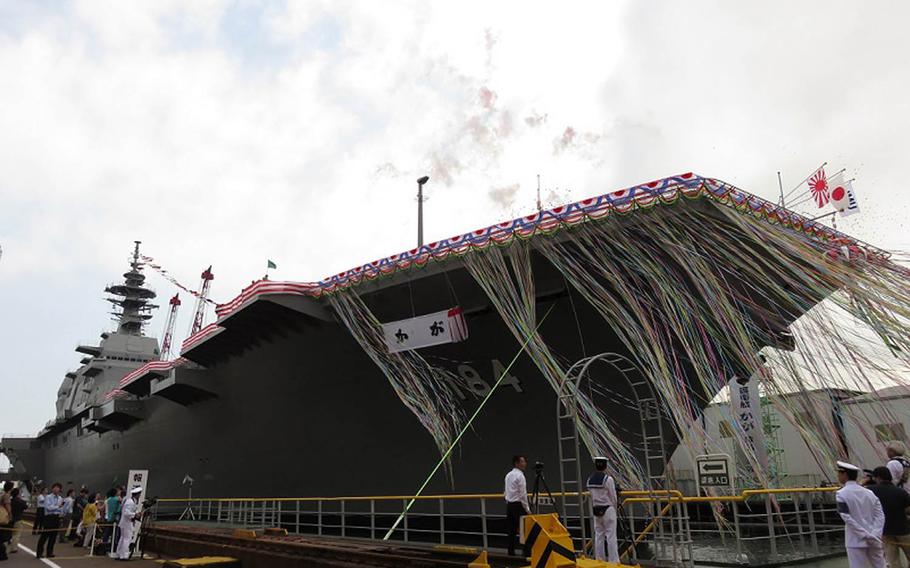 YOKOHAMA, Japan — Japan on Thursday launched the helicopter destroyer Kaga, the second version of the largest ship the nation has produced since World War II.

None of those vessels looks anything like the Navy’s Arleigh Burke-class destroyers.

The flat-top ships more closely resemble aircraft carriers, though they aren’t equipped with arresting wires, ski-jump ramps or other features used to launch fighter jets. The anti-war clause of Japan’s constitution has long been interpreted to bar weapons deemed offensive in nature, which includes aircraft carriers.

However, Prime Minister Shinzo Abe has pushed to expand Japan’s security options in recent years, despite majority popular opposition to his plans. Security bills expected to pass the upper house would allow Japan to defend allies such as the United States in combat for the first time in the post-WWII era.

Meanwhile, tension over the Senkaku Islands, which Japan administers but China claims, has left some analysts to debate whether the helicopter destroyer designs are part of a carrier contingency plan, should a major conflict ever occur.

“Many experts speculate that (Izumo-class) vessels may already be able to accommodate (vertical takeoff) platforms such as the F-35B and V-22 Osprey given the large nature of the ships, especially when compared to the existing Hyuga-class vessels,” according to Navyrecognition.com, which catalogs the world’s naval forces.

“We are not thinking about using this as an aircraft carrier,” Defense Minister Gen Nakatani told reporters in March at JS Izumo’s commissioning ceremony, according to The Japan Times.

U.S. Navy officials have added that operating an aircraft carrier program isn’t something that starts quickly. Building a training program for pilots to land on wobbling platforms in the ocean takes years, as does learning the logistics of moving aircraft and launching them safely.

In the meantime, Kaga, which is expected to be commissioned next year, gives the Japanese an 814-foot platform for anti-submarine warfare, surveillance and transportation missions.

Kaga defends itself with anti-missile and anti-torpedo systems, according to shipbuilder Japan Marine United.

Kaga could also give Japan a boost in the event of a natural disaster. In the aftermath of the 2011 earthquake and tsunami, aircraft carrier USS Ronald Reagan acted as a refueling station for Japanese helicopters supplying aid to tsunami-stricken areas.

Japan’s last ship to take the name Kaga was a WWII aircraft carrier that took part in the 1941 Pearl Harbor attack and was later lost during the Battle of Midway, according to IHS Jane’s Defence Weekly.