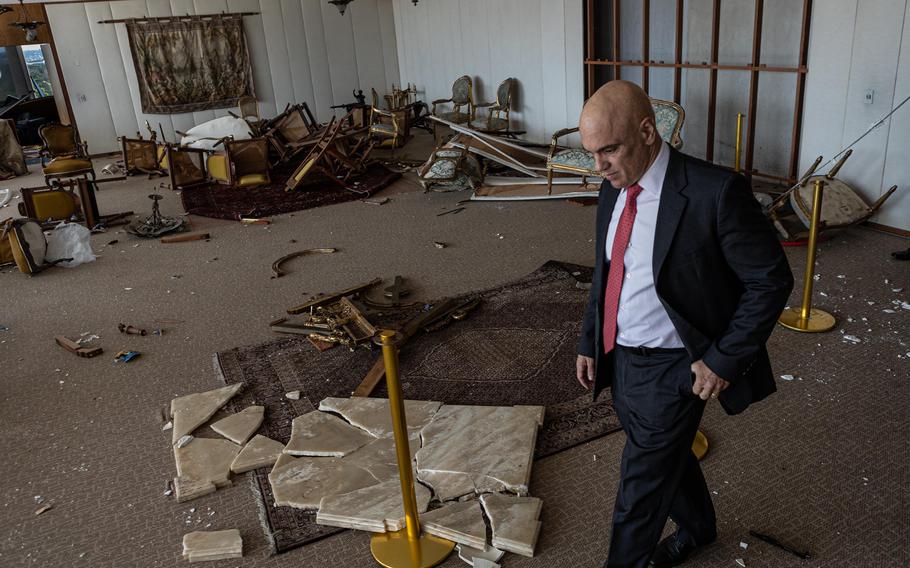 BRASÍLIA - For conservative wunderkind Nikolas Ferreira, the election last fall was a triumph: He garnered more votes than any other member of Brazil’s Congress.

Then he set about undermining the very election he’d just won. To his audience of nearly 10 million followers online, the 26-year-old lawmaker questioned the reliability of Brazil’s electronic voting machines - and suggested, without evidence, that defeated former president Jair Bolsonaro might have been robbed of victory by an unscrupulous left.

The Brazilian judiciary, calling disinformation a singular threat to Latin America’s largest country, has launched a crackdown on anti-democratic speech and incitement that’s ensnaring politicians and influencers on the political right. And in the days after Bolsonaro supporters, many driven by misinformation and disinformation, stormed the country’s Congress, presidential palace and Supreme Court, Ferreira found himself among the growing list of Brazilian conservatives banned by the courts from their social media platforms.

“What is democracy when only one side speaks?” Ferreira asked The Washington Post. “This is clearly political persecution.”

Brazil, one of the world’s largest democracies, is emerging as a global laboratory for a highly charged experiment: How to address the rapid rise of misinformation, hate speech and incitement that’s increasingly fueling real-world actions?

The new administration of leftist President Luiz Inácio Lula da Silva, saying far-right misinformation should be taken as seriously as Islamist extremism, is taking several steps. A new watchdog within the executive branch will be charged with working more systematically to flag offending content to online platforms. Teams in the justice ministry and the office of the president are drafting legislation aimed at curbing online conspiracy theories of the kind that drove the Jan. 8 insurrection in Brasília.

“No one wants to curtail freedom of expression,” said Estela Aranha, Lula’s coordinator for digital rights, a new position. “What we want is to limit what is illegal: Both violent calls for a coup - which we see are a concrete threat in Brazil - as well as hate speech that leads to the commission of crimes.”

The effort follows a polarizing push by Alexandre de Moraes - a judge on the Supreme Court, president of the country’s top election court and, some say, Brazil’s most powerful man - to take the fight against fake news to new levels.

In recent months, the Bolsonaro nemesis has jailed five alleged offenders without trial and ordered social media platforms to block dozens of accounts of politicians, commentators and influencers for allegedly trafficking in lies, hate, incitement and other “anti-democratic” acts. Most of the targets have been on the political right. Some, including Ferreira, have been barred repeatedly (Ferreira was first blocked in November but won his accounts back on appeal).

In October, at the height of the toxic election campaign, the nation’s electoral court granted Moraes broad authority to police lies and decide what is truth in Brazil. Moraes declined to be interviewed. But his peers defended his moves.

From June to now, according to the fact-checking organization Aos Fatos, social media here hosted an avalanche of anti-democratic content compared with the same seven-month period a year earlier, including a 1,278 percent increase on Twitter, 281 percent on WhatsApp and 115 percent on YouTube. A sample review of 400 posts showed about 35 percent contained misinformation, including false claims that the October vote was rigged. Another 10 percent openly called for a coup against Lula’s government.

“Yes, there are instances of the left using disinformation that seemed to increase marginally during the election last year,” said Robert Muggah, co-founder of the Igarapé Institute. “But it’s overwhelmingly coming from the right.”

That content, Lula administration and judicial officials say, is radicalizing a dangerous segment of Brazilian society. They point to the insurrection as the latest evidence. The riot came as conservative social media accounts circulated unfounded claims not only about a stolen election, but also that Lula planned to shut down churches and set up a LGBTQ-loving, abortion-promoting, leftist dictatorship.

As in the United States, much of the disinformation has originated at the top. The Trumpian Bolsonaro, now holed up in Florida as he is investigated in Brazil for incitement, spent his four-year term undermining trust in the election system. He has yet to concede his defeat. As a result, 40 percent of Brazilians believe Lula did not win, according to one recent poll.

“The election was a fraud,” said Lucia Navarro, a 61-year-old Bolsonaro supporter who took part in the Jan. 8 protest. “I thought we would get them out.”

The United States maintains broad constitutional protection for free speech. The laws in Brazil are more like those in countries such as Germany, where incitement and hate speech are more easily prosecuted. Brazil’s political center and left have largely welcomed the judicial and executive efforts to restrain speech, calling it long overdue after four years of Bolsonaro’s often false, sometimes race-, gender- and sexual-orientation-baiting rhetoric. The country’s main press freedom advocacy groups are monitoring the moves but have not publicly criticized the Supreme Court’s actions, said Renata Neder, a Brazil representative for the New York-based Committee to Protect Journalists.

Former allies and other observers claim that Bolsonaro kept a “hate office” on the third floor of the presidential palace - a digital strategy operation that allegedly worked to sow doubts in Brazilian elections, spread disinformation and hurl misinformation at opponents, journalists and others.

“I don’t think this is about free speech,” said Celso Rocha de Barros, a columnist for the Brazilian outlet Folha de S.Paulo. He argued that authorities are pursuing crimes against democracy.

Guilherme Cunha Pereira, owner of the right-wing newspaper Gazeta do Povo, accused Moraes of conducting a “witch hunt.” He compared Lula’s Brazil to the rise of the socialist dictatorship in Venezuela under socialist firebrand Hugo Chávez, who worked little by little to “strangle the media.”

His newspaper has been targeted by Moraes once, when the Supreme Court ordered Twitter to remove a post referencing an article about Nicaragua in Gazeta do Povo. The tweet included the headline: “Dictatorship supported by Lula takes CNN signal off the air.” Lula praised communist Cuba in the election debates but has tread more carefully on the subject of increasingly authoritarian Nicaragua.

“There’s a permanent climate of worry,” Pereira said, particularly among his paper’s columnists. One of them, Paulo Polzonoff, who often writes humor columns, said he has been afraid to use irony or satire in his writing since Jan. 8. He worries the Supreme Court will misinterpret his work or will censor him for using certain terms in reference to political leaders such as Lula.

One challenge for conservatives is that the court has operated largely in secrecy - it often refuses to disclose which content drew penalties.

“When I call [Lula] a dictator, maybe it’s an exaggeration, it’s a figure of speech,” Polzonoff said. “But it’s not violence. It cannot be called an attack against democratic institutions.”

Sen. Carlos Portinho, the former leader of Bolsonaro’s government in the Senate, recalled an interview he gave to Gazeta do Povo after the election Oct. 30. Before it started, he said, the journalist warned him: “You cannot say two words: fraud or algorithm.”

Portinho wasn’t planning on using either, he said, but he was stunned by the request. It amounted to prior restraint - precensorship.

“Even the journalists are afraid,” he said.

Portinho said a “lack of trust” in Moraes played a role in galvanizing the mob on Jan. 8. The fact that the Supreme Court building suffered the most damage that day - rioters at one point celebrated the removal of what they said was Moraes’ chair - was “emblematic” of conservative anger toward the judiciary.

Moraes’s actions since the insurrection, he said, have only poured fuel on the flames. “Lula and his government have to find a solution to change that perspective.”

Lewandowski, the Supreme Court judge, said conservative critics are being disingenuous. The court’s aggressive posture, he argued, was a response to the elevated threat against democracy during the Bolsonaro years. With the far-right leader’s departure, he said, he hopes the court can begin to take a step back.

“We silence the radical voices, not the voices of normal bolsonaristas,” he said. “What we saw on [Jan. 8] was the result of fanaticism - the same thing we saw with Trump in the invasion of the Capitol on January 6.”

The Washington Post’s Gabriela Sa Pessoa in Rio de Janeiro and Amanda Coletta in Toronto contributed to this report.