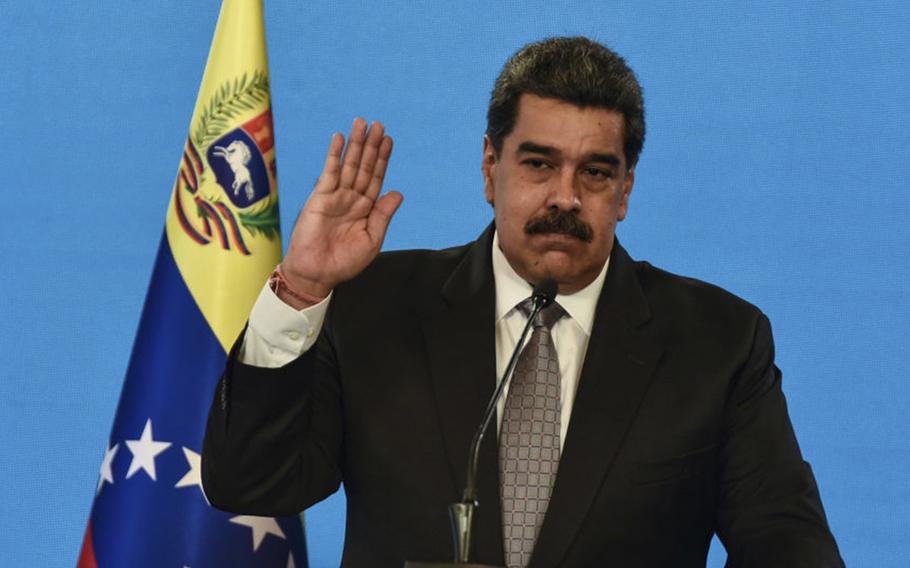 President of Venezuela Nicolas Maduro gestures during a briefing at Miraflores Palace on Feb. 17, 2021 in Caracas, Venezuela. (Carolina Cabral/Getty Images/TNS)

Hernandez, a Los Angeles County deputy public defender, finally left a voice message on April 4, saying he was detained in Venezuela but should be free in 45 days.

Hernandez, 44, is being held at a maximum security military prison in Venezuela and has been charged with criminal association and conspiracy, which can result in up to 16 years in prison.

U.S. State Department officials have determined that Hernandez is being “wrongfully detained” — a classification that triggers enhanced government attention.

“Expeditious action is needed,” the letter stated. “The judicial system in Venezuela is highly compromised, and any trial against Mr. Hernandez is unlikely to produce a fair result.”

A few days before Hernandez was expected to return to L.A., a friend asked him to accompany her to the Colombia and Venezuela border, near a Colombian town called Cucuta, Martinez said.

Hernandez’s family said he had had no intention of entering Venezuela.

The Venezuelan government did not respond to requests for comment.

There has been an alarming increase in wrongful detentions of U.S. citizens around the globe and in Venezuela in recent years, according to the James Foley Foundation, which tracks cases and helps families with detained loved ones.

Earlier this month, basketball star Brittney Griner was released in a prisoner swap after nearly 10 months of detention in Russia on charges that she was carrying vape canisters with cannabis oil.

In October, Venezuela freed seven American prisoners in exchange for the release of two nephews of President Nicolas Maduro’s wife, who were serving time in U.S. prisons for drug smuggling.

Hernandez’s family and supporters question why he was not included in the exchange.

“When a U.S. citizen is detained overseas, the Department works to provide all appropriate assistance,” U.S. State Department officials said in a prepared statement to the Los Angeles Times.

In recent years, armed conflict has dramatically increased along the Colombia-Venezuela border. The U.S. State Department classifies the region as a high-risk area where U.S. citizens are threatened with detention under Maduro’s authoritarian regime.

Martinez said he feels the U.S. government has let his big brother down, allowing him to languish in what he describes as a “dungeon.”

In phone calls to his family, Hernandez said he was in solitary confinement at one point. His cell has no windows, and he is only allowed to walk in circles for 30 minutes in an outside area the size of two vehicles. He is sleep-deprived because the lights in his cell are kept on all the time, and he subsists mostly on a diet of stale tortillas, he told them.

“This place is meant to break you psychologically and spiritually,” Hernandez said in a secretly recorded jailhouse message in August. “If you don’t get us out soon, then there might not be anyone left to save.”

Hernandez was born in El Salvador in 1978 and fled to Los Angeles with his family at age 3, just before the country’s civil war. He grew up in South L.A. and attended the University of California, Los Angeles, first earning a degree in physics and math, then graduating from the law school in 2005.

Hernandez then joined the L.A. County Public Defender’s Office. His most recent assignment was handling felony cases in downtown L.A., and he has trained and mentored many public defenders, according to his family.

When Hernandez seems especially down during their phone calls, Martinez tries to reassure him.

“It’s not going to be forever, man,” he says. “Stay strong. You’re going to be home soon.”