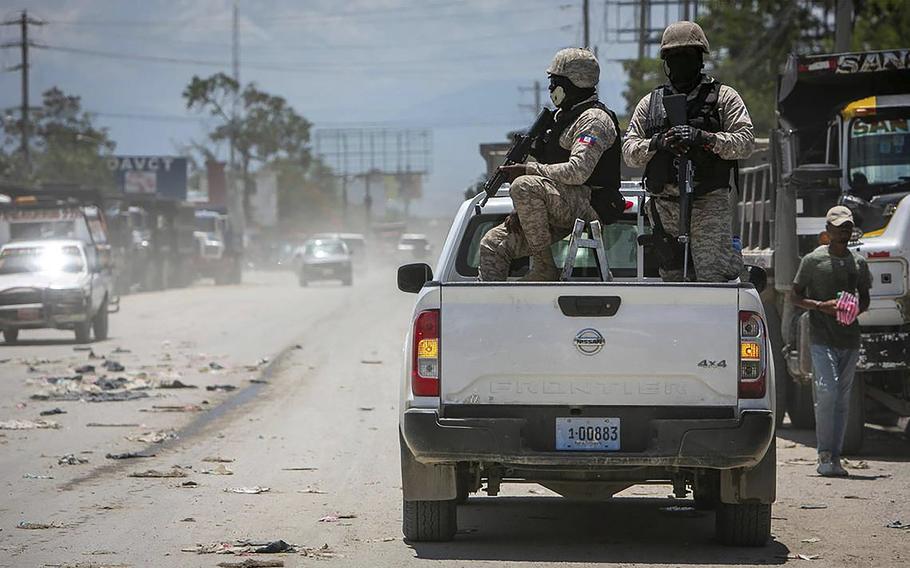 Haiti police on patrol keep their eyes on traffic during a stop at a police checkpoint in Tabarre, near the U.S. Embassy, just east of metropolitan Port-au-Prince. (Jose A. Iglesias, El Nuevo Herald/TNS)

A former rebel leader known as “the torturer” and with a history of armed insurgency against Haitian presidents has been arrested in the slaying of Haiti President Jovenel Moïse, multiple informed sources told the Miami Herald.

Miradieu Faustin, an ex-solider in the Haitian army, was arrested earlier this month along with Divisional Police Inspector Emmanuel Louis, for their alleged involvement in the planning that led to Moïse’s shocking death inside a bedroom in his private home on July 7, 2021, in the hills above Port-au-Prince.

The arrests are the first major development in the Haiti case since an initial 44 individuals were taken into custody in the days after the killing. Among the suspects who remain imprisoned in Haiti, where they still have not been formally charged after 17 months, are a Haitian-American physician and pastor from South Florida accused of masterminding the plot, 18 Colombian nationals and several members of Moïse’s presidential security detail.

A Haitian National Police source told the Herald that investigators are “actively” seeking 11 additional police officers in connection with the murder after warrants were issued.

The arrests of Faustin (also known as Faustin Miradieu and Faustin Mesadieu) and Louis are part of the ongoing inquiry by investigative judge Walther Wesser Voltaire. Appointed in May, Voltaire is the fifth judge assigned to the Haitian inquiry, which has been stymied by a high turnover of judges.

Both men have been in custody for several days and police are questioning them to better understand their alleged roles and connections to the others allegedly involved. Faustin has been on the Haitian political scene since Gen. Prosper Avril took power in Haiti in a 1988 military coup after the departure of dictator Jean-Claude “Baby Doc” Duvalier two years earlier.

Under the army general-turned-president Avril, Faustin would rise in rank and power as his security chief, and be among those accused of torturing democracy activists. In recent years, Faustin was head of security for a commercial enterprise and also an agent in the controversial Protected Areas Surveillance Brigade, or BSAP.

Louis, meanwhile, was assigned to the police station in Port-au-Prince’s Delmas neighborhood. The source said a search of Louis’ home revealed three weapons permits belonging to former Sen. John Joël Joseph, an opposition politician who acknowledged to FBI agents in an interview earlier this year that he met with certain co-conspirators just before they “embarked on the mission to kill President Moïse,” according to a U.S criminal complaint affidavit.

Joseph also admitted to helping obtain vehicles and trying to acquire firearms for the operation. He has pleaded not guilty and is currently in federal custody in Miami along with two other jailed suspects, Mario Antonio Palacios Palacios, a retired Colombian solider, and Rodolphe Jaar, a Haitian businessman and convicted drug trafficker. Those three suspects are currently awaiting trial in federal court on charges that they conspired to kill Moïse, 53. They were transferred to the United States after fleeing to Jamaica and the Dominican Republic, where they were arrested.

Haitian police allege that a hit squad made up of former Colombian soldiers and two Haitian Americans from South Florida stormed the president’s home under the cover of darkness and killed him. Moïse was shot 12 times and tortured, and died at the scene. His wife, former first lady Martine Moïse, was seriously wounded, while the couple’s two children were left unharmed after hiding in a bathroom.

Among those jailed shortly thereafter were the coordinator of the president’s security detail, Jean Laguel Civil, accused of bribing cops not to show up for work or to stand-down during the armed attack, and the head of the palace guards, Dimitri Hérard. They are among several Haiti National Police officers who have been jailed and who, according to a 124-page investigative report first obtained by the Herald, showed “no intention of defending” Moïse during the attack.

Earlier this month, the police’s internal affairs unit recommended that several officers accused in the attack or assigned to the detail be fired or disciplined.

Faustin is close to former government consultant Joseph Félix Badio, a fugitive key suspect in the assassination who served as best man in Faustin’s wedding. He is also believed to be an associate of Vitel’homme Innocent, an indicted gang leader who is the subject of a $1 million U.S. bounty seeking information leading to his arrest.

Innocent, according to the FBI, is the leader of the gang Kraze Barye, which has taken control of the area not far from the U.S. Embassy in Tabarre, a Port-au-Prince neighborhood. The gang’s territory includes the National Police Academy, whose director, Police Commissioner Harington Rigaud, was killed on Nov. 25 in an attack in the area. Some have speculated that Innocent may be harboring Badio.

While police have not revealed much about the involvement of Faustin, the ex-soldier’s reputation is well-known in Haitian political and international human rights circles.

In 2004 Faustin was among a group of disgruntled former Haiti National Police and army soldiers who led a bloody coup against then-President Jean-Bertrand Aristide, which sent the president fleeing into exile.

In an interview, he said that he commanded 50 men, who had been in Port-au-Prince for two weeks participating in the armed insurgency that began on Feb. 5, 2004.

The bloody revolt was headed by Guy Philippe, the former high-ranking Haitian police officer and paramilitary coup leader who is currently serving time in federal prison in the United States after being sentenced in a Miami federal court to 108 months. He pleaded guilty to conspiring to launder money from drug trafficking.

Philippe was preparing to take office as a senator in the Haitian Parliament when he was arrested in Port-au-Prince after eluding U.S. drug agents for over a decade. His political party: the Platform of the National Consortium of Haitian Political Parties, whose head, Jeantel Joseph, heads the environmental corps that Faustin worked for at the time of his recent arrest.

Faustin is also a former sublieutenant in the Armed Forces of Haiti, and was identified in an Organization of American States human rights report as having tortured political opponents, gaining him the nickname “the torturer.” Among his many acts of alleged cruelty is a Nov. 1, 1989, incident under the Avril government that was documented by the OAS’ Inter-American Commission on Human Rights. The incident involved Evans Paul and two other political opposition leaders. The opposition leaders were jailed and beaten over several days after appearing on television calling for nonviolent protests against the Avril government. Paul, who in 2014 would become prime minister in President Michel Martelly’s administration, suffered five broken ribs and a crushed hip during the beating.

Avril would be forced out of power in 1990 and move to Florida, where Paul and others would eventually file a multi-million dollar suit against him in U.S. courts, accusing him of gross human rights violations.

Two years after the Paul beating, Faustin, by his own admission, was involved in the 1991 military coup against Aristide as a member of the military that overthrew the former Salesian priest just eight months into his presidency, which he won in a historic landslide election. Aristide was restored three years later under the protection of more than 20,000 U.S. soldiers.