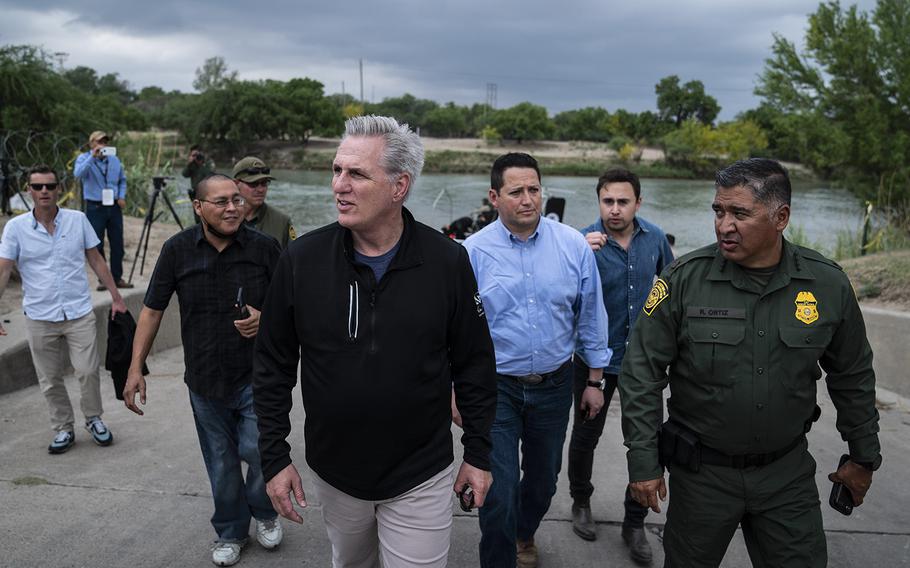 A federal judge in Texas paused the Biden administration's attempt to end the Trump-era "Remain in Mexico" program, which requires some non-Mexican asylum seekers to be sent back to that country to await immigration proceedings.

U.S. District Judge Matthew Kacsmaryk on Thursday issued a stay on the administration's effort to terminate that policy while Texas and Missouri's attempts to force the federal government to continue the program are considered in court. The Department of Homeland Security in August stopped enrolling new asylum seekers into the program, which had been halted and restarted for years due to legal challenges and a change in administrations.

President Biden had campaigned on putting an end to the policy, formally known as Migrant Protection Protocols (MPP), which he called "dangerous" and "inhumane" in a 2020 tweet. In June, the U.S. Supreme Court ruled that Biden had the right to end the program, but it sent the case to Kacsmaryk's court in Amarillo, Tex., to determine whether the October 2021 memo that outlined how the policy would be dismantled complied with administrative laws.

The judge, who was appointed by former president Donald Trump, wrote that the memo did not consider the policy's "deterrent effect on illegal border crossings and the reduction of unmeritorious asylum claims," and said it prioritized dangers in Mexico over dangers of crossing the border "in the first instance."

Kacsmaryk also wrote that the federal government appeared to have terminated the policy in an "arbitrary and capricious way," and that the DHS had not adequately assessed the costs to states affected by increases in immigration.

A DHS spokesperson told The Washington Post that the agency disagrees with the decision and is evaluating next steps.

MPP has been criticized by rights groups for needlessly endangering asylum seekers, who risked being preyed on by gangs and kidnappers. DHS Secretary Alejandro Mayorkas had written in the October 2021 memo that while MPP reduced migratory flows, "it did so by imposing substantial and unjustifiable human costs on the individuals who were exposed to harm while waiting in Mexico." He also said the administration would discourage "irregular migration" in favor of more safe and orderly methods.

During the Trump years, MPP was used to send more than 60,000 asylum seekers across the border to Mexico. Biden ordered Mayorkas to review MPP shortly after taking office, but the administration's attempts to terminate the policy were slowed by legal challenges from state-level GOP officials. As of August, the DHS was preparing to quickly end the policy and said asylum seekers would be allowed to cross the border on the day of their hearings and wait for an outcome in the United States.

Since taking office, Biden has made an effort to roll back or tamp down on Trump-era border-control policies, such as the decision to bar citizens of some Muslim-majority countries from entering the United States.

Kacsmaryk's ruling comes ahead of the scheduled lifting next week of Title 42, an order enacted under Trump that cited the coronavirus pandemic as justification for the rapid expulsion of some migrants. (That policy was deemed no longer necessary by the Centers for Disease Control and Prevention in April, but termination was held up by legal fights.)

An investigation released in January 2021 by Human Rights Watch, Stanford University and Willamette University reported that children and adults had described "rape or attempted rape and other sexual assault, abduction for ransom, extortion, armed robbery, and other crimes committed against them" while under MPP.

The Washington Post's Maria Sacchetti contributed to this report.