Trump aides Bannon, Miller advising the Bolsonaros on next steps 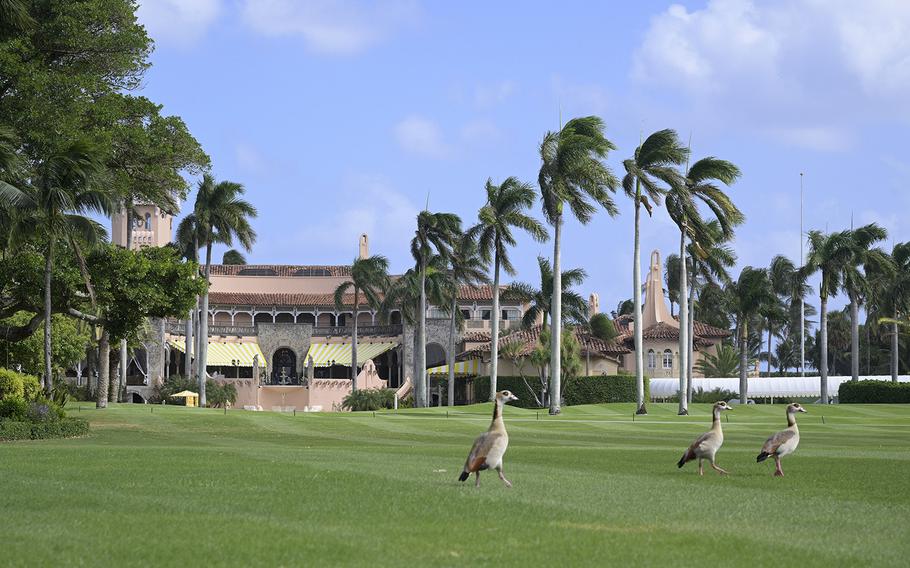 RIO DE JANEIRO — While tens of thousands of supporters of President Jair Bolsonaro camp outside military facilities across Brazil to protest his election loss, members of Bolsonaro's inner circle are meeting with advisers to former president Donald Trump to discuss next steps.

Brazilian congressman Eduardo Bolsonaro, the president's son, has visited Florida since the Oct. 30 vote, meeting Trump at Mar-a-Lago and strategizing with other political allies by phone. He spoke with former Trump strategist Stephen K. Bannon, who was in Arizona assisting the campaign of GOP gubernatorial candidate Kari Lake, about the power of the pro-Bolsonaro protests and potential challenges to the Brazilian election results, Bannon said. He lunched in South Florida with former Trump campaign spokesman Jason Miller, now CEO of the social media company Gettr, and discussed online censorship and free speech, Miller said.

Neither Trump nor Eduardo Bolsonaro responded to requests for comment.

Those conversations have mirrored debates unfolding in Brasília, where Bolsonaro's supporters are discussing next steps for his populist conservative movement. That movement is facing a reckoning not unlike that of the American right after Trump's 2020 loss over how to sustain itself when its charismatic standard-bearer has been defeated.

The Brazilian right has some advantages heading into the new year, when leftist former president Luiz Inácio Lula da Silva will take office. While Bolsonaro lost, his party and allies made gains in Congress and governorships. Tens of thousands of his supporters continue to camp outside military bases in over 20 cities, some calling for commanders to intervene in the vote.

Demonstrators have been photographed holding handmade signs reading "#BrazilianSpring" and "#BrazilWasStolen" in English, demonstrating the close ties between right-wing movements in the two countries. The phrases have trended on Brazilian Twitter several times this month. "Brazilian Spring" was coined shortly after the election by Bannon, he and others say; he has since dedicated several episodes of his podcast to an election he's calling one of the most consequential political events in the world.

Some of Bolsonaro's advisers, including Bannon, want him to contest the results, an effort that would probably fail but would encourage protesters. On Tuesday, Bolsonaro's Liberal Party filed a request with Brazil's Superior Electoral Court to invalidate some 250,000 second-round ballots used in voting machines that were manufactured before 2020. Fact-checkers say the inquiry is premised on false information about older machines.

Supreme Federal Court Justice Alexandre de Moraes, the president of the electoral court, said the machines were used in both the first and second rounds, and said the party should also request a review of first-round votes - which could put at risk the election of its candidates who won. He gave the party 24 hours to respond.

Others want to move on to bigger fights that they believe could have greater international appeal. Central to this approach would be an attack on the legitimacy of the country's top courts, which can kick people offline and arrest them if they post misinformation about the electoral process or other "anti-democratic content." While many Brazilians see the courts as a bulwark of democracy, the judiciary is increasingly being accused by legal scholars of overreach and political targeting. Many rulings are sealed, and terms such as "misinformation" and "fake news" - the English phrase, used by Trump to describe coverage he found unflattering, is written into Brazilian law - have no clear definition.

Brazil's supreme and electoral courts, which are among the most muscular regulators of online speech in any democratic nation, have in recent weeks ordered tech companies to remove the social media accounts of several pro-Bolsonaro politicians and journalists, and in September ordered raids at the homes of business executives accused of promoting election disinformation and defending a military coup in a WhatsApp group.

Bolsonaro has not conceded the loss, and has encouraged supporters to maintain their protests outside the military bases. But he has instructed his chief of staff to proceed with the transition to Lula's administration, parts of which are continuing apace, people told The Washington Post.

Miguel Lago, executive director of the Rio-based think tank Institute for Health Policy Studies, said Bolsonaro's three-week silence has "cost him critical time when he could have further rallied the troops."

American friends, themselves reeling from the historic underperformance of Republicans in the U.S. midterm elections, are acting as cheerleaders and advisers. Bolsonaro and Trump built a strong alliance when both were in office, Trump seeing a kindred spirit in the bombastic, social media-driven Bolsonaro. Trump's advisers were drawn to Bolsonaro's love of guns, his nationalism, his willingness to antagonize Brazil's long-standing allies and slash environmental regulations, and his embrace of culture wars.

Eduardo Bolsonaro, the president's third son, was often the glue in relationships between the two worlds. He has made multiple trips to Mar-a-Lago during his father's tenure and was in Washington during the Jan. 6, 2021, insurrection at the Capitol. He helped bring the Conservative Political Action Conference to Brazil.

Some insiders say the Brazilian movement is bigger than any one leader.

"What's happening in Brazil is a world event," Bannon told The Post. "The people are saying they've been grossly disenfranchised. [The movement] has moved beyond the Bolsonaros in the way that in the U.S. it has moved beyond Trump."

Brazilian congresswoman Carla Zambelli, a Bolsonaro supporter, also traveled to the United States after the election. In Washington, she tried to drum up international support after Brazil's top court kicked her off social media this month, costing her nearly 10 million followers. She had chased a Lula supporter in São Paulo while wielding a gun and had encouraged protesters blocking highways after Bolsonaro's loss, but the reasons for the ban are not publicly known. The full court ruling in her case has not been released.

Zambelli told The Post she met with several U.S. politicians to call for the restoration of her online megaphone and attempted to appeal the ban with the Organization of American States.

Zambelli said the idea that an elected official can be censored by an opaque court that is openly antagonistic to one party should resonate globally. She said she hoped to bring together politicians and supporters in both countries "on this international front for freedom of expression."

Supporters of those whose social media use has been restricted by the court have tweeted messages to Elon Musk, Twitter's new owner, to reinstate their accounts.

The restrictions impact only the feeds of Brazilian users. Twitter executives looked into them at the behest of Musk but determined that the company couldn't unblock them without running afoul of the Brazilian government, according to a person familiar with the discussions, who spoke on the condition of anonymity to describe them freely.

Miller told The Post that Bolsonaro wasn't running against Lula but against Brazil's supreme court. He described it as a "supreme court, an attorney general, the FBI and the U.S. attorney all rolled up in one." Gettr, his company, has appealed to the Brazilian court to restore Zambelli's profile to its service.

João Gabriel Pontes, a constitutional lawyer affiliated with the State University of Rio de Janeiro, said the Brazilian right's appeals to free speech ideas are disingenuous. Many of those who have been banned by the court have been accused of promoting disinformation, he said, and Brazilians do not believe that people should be able to say whatever they want online.

"It's not the average person getting their posts taken down," Pontes said. "It's the business people and public figures - powerful people connected to the Bolsonaro family and to a network that is intentionally trying to discredit our electoral process."