Child among 5 dead in collision of boat with migrants and Cuban Coast Guard; Cuba blames US

(Tribune News Service) — A young child is among five dead after a speed boat carrying Cubans collided with a Cuba Coast Guard vessel, Cuban authorities said. The Cubans were trying to make it to the United States when the Cuban Coast Guard vessel tried to stop it, and it turned over.

In a press release, the Ministry of the Interior, or MININT, the agency overseeing the Coast Guard, said the collision happened when the government vessel was “identifying” the boat carrying the migrants. One man, three women and a minor died, and 23 people were rescued, MININT said.

The statement, published Saturday, said the boat sank north of Bahía Honda, a coastal town west of Havana but did not mention when the events took place. It adds that the speedboat departed from U.S. territory, violated Cuban national waters and was part of a human trafficking operation. MININT also blamed the U.S. government for the incident.

“A new event with a fatal outcome occurs as a consequence of the hostile and cruel policy of the United States government against Cuba, which tolerates and encourages illegal departures from Cuba by allowing irregular migrants to remain in its territory,” the statement said.

The statement explicitly blames the Cuban Adjustment Act, a 1966 law allowing most Cuban migrants to get a green card quickly, for encouraging illegal migration. The elimination of this law has been, for years, a foreign policy objective of the Cuban government.

“In this way, the U.S. government does not contribute to guaranteeing safe, orderly and regular emigration, while at the same time, it tries to create situations of social unrest,” MININT said.

Cuba’s foreign minister, Bruno Rodríguez, echoed the accusations, tweeting that the U.S. government “has undeniable responsibility in encouragement of irregular migration from Cuba and human smuggling.”

The “admission of those succeeding in the attempt; the Cuban Adjustment Act and the economic blockade incite irregular migration and prop up those who profiteer from human smuggling,” he added.

The U.S. embassy in Havana referred to the event as an accident in a tweet in Spanish sending condolences to the families.

“The United States sends our condolences to the families of the Cubans who died today in an accident north of Bahía Honda,” the embassy said. “As we expand safe and legal pathways for migration, we warn against attempting dangerous and sometimes fatal irregular migration.”

But activists and critics of the government said the collision was not an accident but a killing, drawing a parallel with the fate of 41 Cubans, including 10 children, who drowned in July 1994 when two government vessels maneuvered to sink the boat carrying the migrants, according to the survivors’ testimonies.

While several years apart, the two incidents happened during a mass exodus of Cubans trying to reach the United States looking for better economic conditions and political liberties. The two governments have engaged in talks to discuss the ongoing migration crisis. In September, Cuban Coast Guard officials met with their American counterparts in Havana to discuss enhancing “cooperation in combating illegal migration and drug trafficking and conducting search and rescue operations,” the U.S. embassy in Havana said.

Activists were quick to point out that the U.S. Coast Guard had safely interdicted and returned to Cuba 6,182 Cuban migrants in fiscal year 2022 with no fatalities during the encounters. The U.S. Coast has sent back 1,105 Cubans in October. 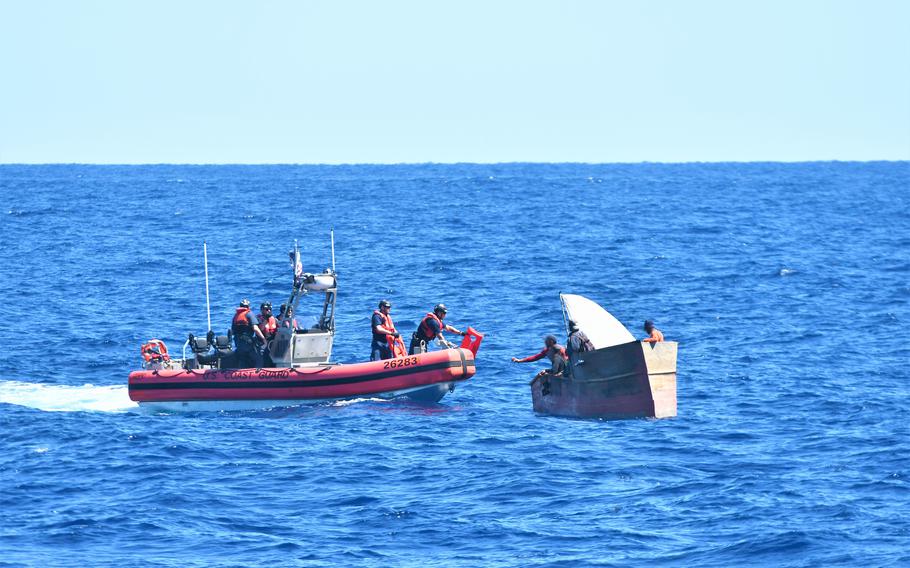 A Customs and Border Protection Air and Marine Operations air crew alerted spotted this rustic vessel about 50 miles south of Boca Chica, Fla, Oct. 1, 2022. The people were repatriated to Cuba on Oct. 5, 2022. The U.S. Coast Guard had safely interdicted and returned to Cuba 6,182 Cuban migrants in fiscal year 2022 with no fatalities during the encounters. The U.S. Coast has sent back 1,105 Cubans in October. (U.S. Coast Guard)