The American Dream is over for Venezuelans stranded in Costa Rica 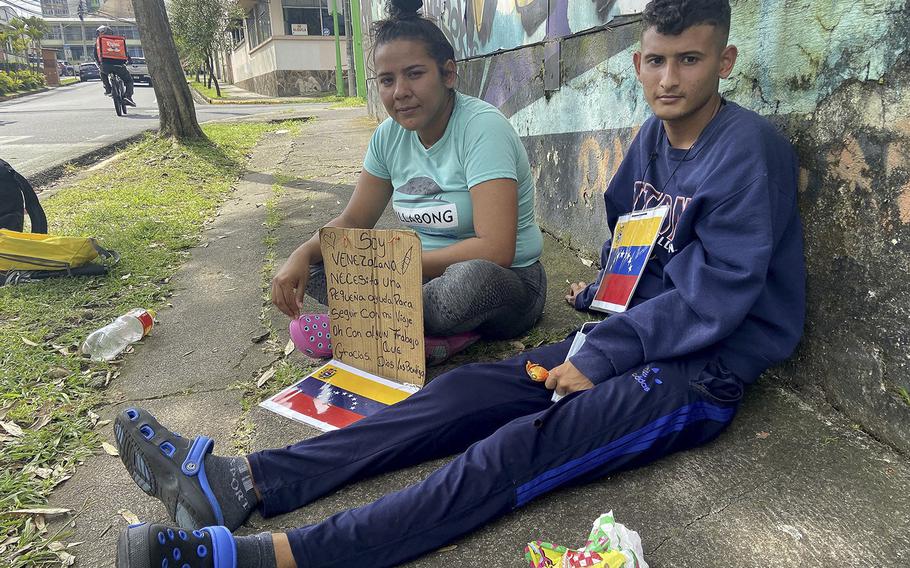 Yulexny Gonzalez, left, and Rolando Suarez left Venezuela on Aug. 20, 2022, crossed the Darien Gap and are now stuck in Costa Rica. They are selling lollipops on the streets of San Jose, Costa Rica to earn enough money for rent and basic goods. (Michael McDonald/Bloomberg )

They trudged through knee-high mud, slept under torrential rain and stepped over skeletons of those who didn't make it. Like tens of thousands of Venezuelans suddenly stranded across Mexico and Central America, Yulexny Gonzalez and Rolando Suarez find themselves unexpectedly in Costa Rica, sick and penniless, selling sweets on a street corner, sleeping on the floor.

For months, Venezuelans fleeing the economic disarray and authoritarian rule of President Nicolas Maduro were streaming into Colombia and up the roadless swamp-filled Darien Gap, walking north with the understanding that the U.S. was offering them asylum. That ended suddenly on Oct. 12 when the Biden administration expanded a Trump policy of sending back such refugees into Mexico.

The policy shift occurred two days after Suarez and Gonzalez reached Costa Rica, making them part of a growing wave of stranded Venezuelans. Panama announced this week it would close its borders to Venezuelans without visas traveling from north to south, and Nicaraguan officials are demanding a $150 per person fee as a "right of safe passage" for Venezuelans seeking to enter from Costa Rica, the migrants say.

Guatemala says it has expelled 10,000 Venezuelans to Honduras this year. On Tuesday, the Venezuelan government began half-price repatriation flights from Mexico for its citizens.

Across the region, Venezuelans are suddenly filling temporary transit camps, sleeping on the street and begging. Their stories are harrowing.

Emmanuel Huerta, 27, crossed the Darien Gap and made it to Texas on October 8, where he was arrested and deported to Mexico on October 13. He'd planned to work at a friend's barber shop in Miami and save up enough cash to help his mother buy a house in Venezuela. Now he just wants to scrape together a few hundred dollars and buy a ticket back to Venezuela. He was granted 20 days to stay in Mexico.

"I don't want to know anything about Mexico," he said. "I just wanted to work in the U.S. I know that I won't be able to enter the U.S. anymore in my life."

Not everyone wants to go home.

"I don't want to go back to Venezuela," Gonzalez said. "We left because there's nothing there. They say the Lord prays for Venezuela, but that's a lie. None of our prayers have been answered."

Costa Rica's Immigration Director Marlen Luna Alfaro said earlier this month that 3,700 migrants are arriving daily at its southern border with Panama, 80% of whom are Venezuelan. That compares to about 200 per day previously. President Rodrigo Chaves warned the number could reach 10,000. He called for humane treatment of them in Costa Rica and said the government isn't considering repatriation flights right now.

"Closing our border is impossible because we don't have an army," Chaves said on October 12. "Returning them is like playing ping pong. You send them back there and they just come back here."

Venezuela's embassy in Costa Rica is run by allies of opposition leader Juan Guido and has partnered with a local Catholic charity to help stranded migrants.

The Venezuelan exodus has been going on for nearly a decade as the country has fallen into disarray and under severe US sanctions. Attempts by the Trump administration to urge Maduro out and Guaido into power failed. Seven million Venezuelans -- nearly a quarter of the population -- have streamed into neighboring countries.

The Biden administration began welcoming those who made it, but political pressure over record immigrant numbers along the southern border caused a sudden shift in policy.

This has created pressures on countries to the south and on would-be immigrants like Gonzalez and Suarez who are now unwelcome. They must come up with a new plan.

Sitting on a street corner in San Jose wearing Venezuelan flags around their necks and holding a bag of candy, the two offered a lollipop to a passerby. Gonzalez, 28, visited Costa Rica's immigration headquarters but was told the earliest opening for an appointment is February.

"I'm not going back through that jungle," Gonzalez said of the Darien Gap and perhaps his homeland.

"The American dream is over for us."