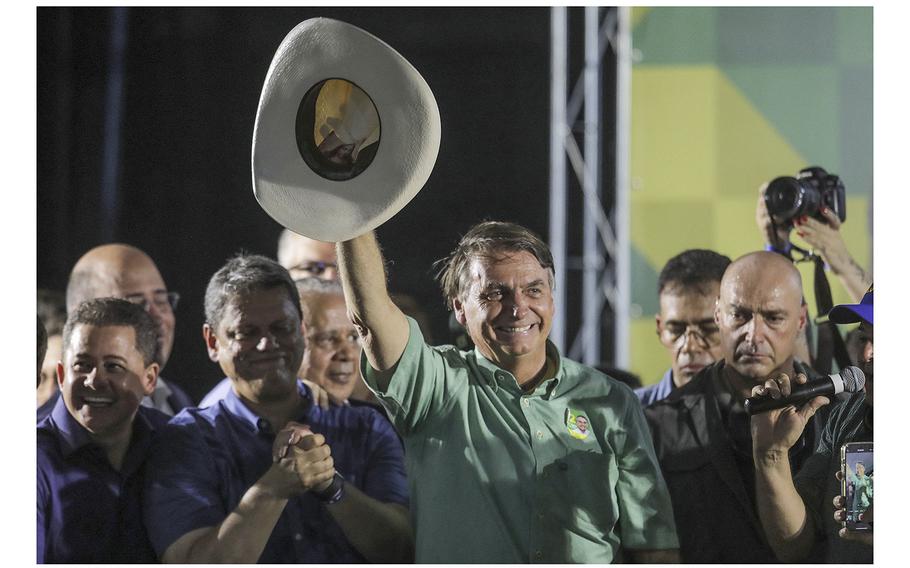 Brazilian President Jair Bolsonaro waves to his supporters during a campaign rally in Guarulhos, Brazil, on October 22, 2022. (Caio Guatelli/AFP via Getty Images/TNS)

WASHINGTON (Tribune News Service) — Congressional Democrats and the Biden administration are demanding a free and fair election in Brazil on Sunday, floating consequences for the “Trump of the Tropics,” Jair Bolsonaro, if he refuses to recognize the outcome of a democratic election.

The Brazilian president has said he will not respect the results if he does not come out on top in the runoff election against former President Luiz Inácio “Lula” da Silva, leading some to question whether Jan. 6-like violence could erupt.

The United States and Brazil are linked economically and politically as the two largest democracies in the Western Hemisphere, with strong trade relationships in commodities that range from aircrafts to oranges.

Climate change is also front of mind for U.S.-based Brazil observers as voters head to the polls. Under Bolsonaro, deforestation of the Amazon surged. The world’s largest rainforest, an indispensable natural resource that Lula has pledged to protect, absorbs greenhouse gases that warm the atmosphere.

The Senate last month unanimously warned via a resolution pushed by Sen. Bernie Sanders, I-Vt., that the U.S. government could reconsider its relationship with the neighboring democracy if a new government comes to power “through undemocratic means, including a military coup.”

After the U.S. underwent its own turbulent transition of power in 2021, culminating in a violent attack on the Capitol, American lawmakers are worried about the future of Brazil under pressure from the same election-denying forces and political violence.

The margin between the two candidates is narrow. Lula received around 48.4 percent to Bolsonaro’s 43.2 percent in the first round of voting on Oct. 2, leading analysts to predict either could clinch a victory, though only Lula is expected by some to potentially win big.

Bolsonaro has laid the groundwork for an election challenge. At a campaign event in August, he outlined three possible election outcomes: “Being arrested, killed or victory.”

Taking a page out of former President Donald Trump’s playbook, he has questioned the integrity of Brazil’s electronic voting system for months.

Voting is mandatory for Brazilians over 18 years old, and their system is widely viewed to be one of the safest and most reliable in the world. When polls close, the system churns out the results from all precincts, even those deep in the Amazon, in hours, meaning Brazilians are expected to know who their next president is before they go to bed Sunday.

But Bolsonaro has suggested Brazil should instead rely on paper ballots.

Ryan C. Berg, director of the Americas Program at the Center for Strategic and International Studies, called Brazil’s voting system an “extraordinary machine.” He said he remains convinced of the system’s security, despite the fact that Brazil is still a developing country.

The Biden administration said it is monitoring the elections and has “faith in the strength of Brazil’s democratic institutions.”

“As a partner democracy to Brazil, we will continue to follow the elections with the full expectation that they will be conducted in a free, fair, transparent, and credible manner, with all relevant institutions operating in accordance with their constitutional role,” a spokesperson for the National Security Council said.

But congressional Democrats are not so sure Brazil’s democratic safety nets will hold.

Iman Musa Jadallah, advocacy director for the Washington Brazil Office, one of several groups that met with Sanders over the summer, said the legislation he sponsored along with five Senate Democrats “sends a strong signal.” House Democrats drew up a similar resolution, but it remains in committee.

Jadallah is not concerned that no Republicans signed on to the legislation. A bipartisan measure would have been ideal, she added, but the fact that no Republican “was willing to explicitly oppose [the Senate bill] is pretty significant.”

Democrats also warned President Joe Biden in a letter — led by Sen. Patrick J. Leahy, D-Vt., and co-signed by Bob Menendez and Gregory W. Meeks, chairmen of the Senate and House foreign policy panels, respectively — that Bolsonaro had threatened to “go to war” to prevent a “stolen election.”

The 39 Democrats urged Biden to make it “unequivocally clear” to Brazil’s president that such unprecedented threats would be met with “serious consequences.”

They recommended that the Biden administration review Brazil’s status as a global NATO partner and a major non-NATO ally, as well as Brazil’s accession to the Organisation for Economic Co-operation and Development.

The letter and the Senate resolution, which passed by unanimous consent on Sept. 28, both suggested that defense and security cooperation could be on the chopping block if Bolsonaro refuses to relinquish the presidency.

Those warnings may not have caught Bolsonaro’s eye. But they would speak to a very important part of his base, said Berg.

Membership in intergovernmental organizations and security cooperation with the United States indicates “that Brazil’s made it on the international stage,” the CSIS analyst explained.

“So I do think that those are serious consequences if the Congress is indeed serious about revoking them if there’s any funny business in the election,” Berg said.

But as for a violent uprising that U.S. lawmakers fear could mimic the Jan. 6, 2021, attack on their own seat of government, Berg doesn’t see that scenario playing out.

Brazil’s democratic system lacks the certification process that drew Trump’s supporters to Washington in hopes of disrupting the counting of electoral votes to allow him to hold on to power.

“I don’t envision some kind of citizen uprising that allows for Bolsonaro to remain in the Palácio da Alvorada if he loses. I do not discount at all that there could be election-related violence — there already has been — in this election and there most likely will be after the election as well,” Berg said.

Jadallah, with the Washington Brazil Office, an independent advocacy organization, is equally concerned about political violence. She points out that gun sales have been on the rise in Brazil under Bolsonaro, who loosened restrictions on civilian ownership, raising concerns about the potentially deadly nature of any political unrest.

Whether that would manifest into an event like Jan. 6, Jadallah doesn’t know. She said Bolsonaro’s supporters could attempt to invade the Superior Electoral Court in Brasilia, for example, although how that would stop Lula from taking power if he is the winner is unclear.

“The U.S. has very solid democratic institutions. And here in Brazil, we tend to think that they are a little bit more fragile. We’re not so sure that we would be able to come out of an event like that,” Jadallah said.

It is difficult for experts to forecast just what shape an election challenge by Bolsonaro would take. Jadallah says she “absolutely” believes he will question the results if he loses, but like Berg she emphasized that Brazilians trust their voting system, the same system that elected Bolsonaro in 2018.

With that in mind, the right-wing populist could aim his attacks at preelection procedures. Berg said those could, for example, target Brazil’s Supreme Federal Court, such as recent rulings to allow two separate probes related to his election fraud claims.

“My gut feeling is that arguments against the actual vote count aren’t going to get him very far,” he added.

In response to Bolsonaro’s fiery rhetoric, some election watchers have questioned whether he would call on the military to help him hold on to power. “In doing so, he is jeopardizing the constitutionally-mandated neutrality of the military,” the Leahy letter stated, flagging that the head of the Brazilian Navy has echoed Bolsonaro’s election fraud claims.

But in Brazil, like in the United States, the military is under civilian control. Berg doubts Bolsonaro could muster enough support at the upper ranks of the Armed Forces to mobilize a military coup.

No matter who comes out on top Sunday or the fallout, questions will remain over what Brazil’s future holds. Neither candidate has cast a vision for how to overcome the country’s economic woes, leaning instead, in the increasingly polarized political environment, into nostalgia for a Brazil they claim has been lost.

“It’s disappointing for the country of the future,” Berg said, “which Brazil is often referred to, to have no talk about its future.”