US resolution proposing rapid force for Haiti imperiled: 'No one is stepping up' 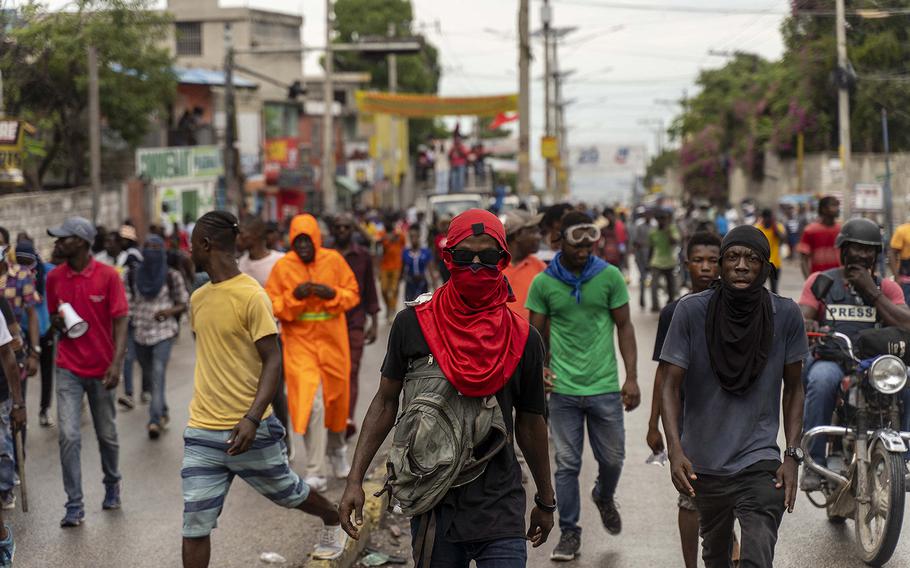 Demonstrators protest to reject an international military force requested by the government in Port-au-Prince, Haiti, on Oct. 24, 2022. (Richard Pierrin/AFP/Getty Images/TNS)

(Tribune News Service) —  A proposal by the United States encouraging the rapid deployment of an international military force to Haiti is on the verge of failure after no country volunteered to contribute troops, multiple sources tell McClatchy and the Miami Herald.

Biden administration officials are debating whether to scrap the U.S. resolution, circulated among U.N. Security Council members, unless a foreign partner steps up and offers troops in the next few days.

The potential reversal is a diplomatic setback for the White House, which had been hoping to corral an armed, foreign force that would be backed with equipment, training and logistical support from the United States.

But the U.S. never volunteered its own forces, raising frustration among its partners. Several countries on the Security Council demanded a concrete plan in writing be prepared before a vote on the resolution took place. Also, Russia and China have both openly expressed concerns on the Security Council about the deployment of foreign forces to Haiti.

Countries around the world have so far rebuffed the proposal. France shut down the prospect of providing troops early in the discussions, and Canada repeatedly expressed reluctance to contribute ground forces, despite flying-in several armored vehicles to Haiti in recent days and calling on countries to donate to a fund to help the Haiti National Police.

Brazil — focused on its own domestic elections coming up at the end of the month — expressed skepticism, and U.S. officials questioned whether CARICOM, the 15-member Caribbean Community that Haiti is a member of, had the capacity on its own to make a meaningful difference on the ground.

"There's been no progress getting partners to volunteer," said one source familiar with the matter, speaking on the condition of anonymity to speak candidly. "No one is stepping up."

The regional bloc has been in discussions with both Canadian and Haitian officials in recent days over Haiti's request for a rapid reaction force. While considering the request, members want clarity on troop makeup and the mandate of such a force.

Canada is seen as the most likely partner to lead a rapid deployment, despite its hesitancy. But it remains unclear what the mandate of such a force would be. Questions range in terms of the size, duration and risk of the mission, which could include lifting the siege of the Varreux fuel terminal, or securing a humanitarian corridor by protecting the distribution of aid throughout the country.

Haiti is in the midst of its worst security, economic and political crisis in decades, with gangs now in their seventh week of blocking the country's main fuel terminal and seaports. The blockade is leading to a shortage of fuel, food and potable water amid a burgeoning cholera outbreak.

U.N. Secretary General António Guterres called on the international community to work directly with Haiti to organize a rapid force that could break the stranglehold of gangs on the country's most important ports and roadways. The Haitian government issued a similar request.

Last week, the U.N. Security Council unanimously voted to sanction Haitian gangs and those who arm and finance them. While the sanctions are a start, the government of Haiti has said more is needed.

The U.S. resolution would provide any rapid reaction deployment with powers under Chapter 7 of the U.N. charter, which allows troops to use force for the enforcement of peace.