US begins deporting Venezuelans; some claim they entered before new measures began 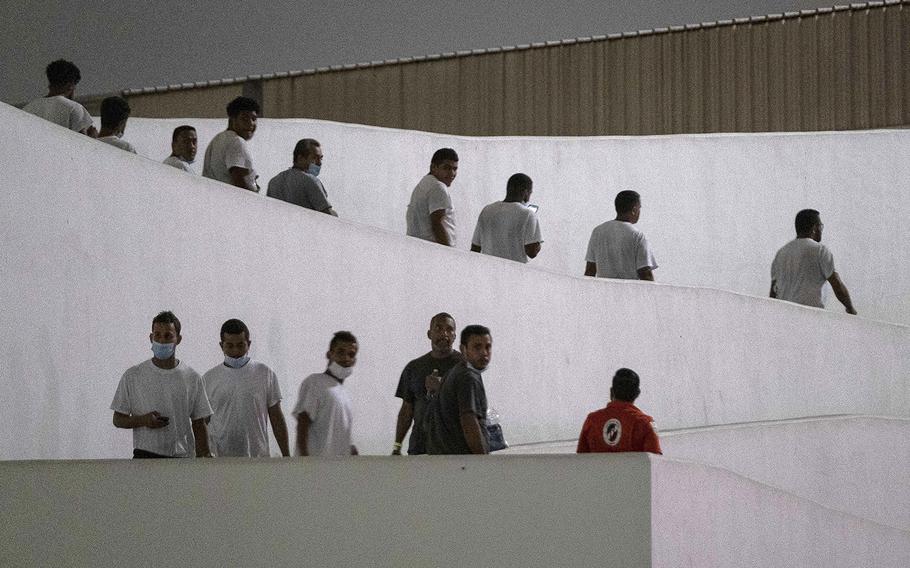 MIAMI (Tribune News Service) — The U.S. government began deporting Venezuelans held at immigration detention centers, transferring dozens to Mexico on Thursday even though many of them say they had entered the United States before the new immigration measures were announced.

A group of about 150 Venezuelans who were in a detention center in Texas were placed in buses and driven to the border and forced to cross a pedestrian bridge that connects El Paso with Ciudad Juárez, where Mexican immigration officials were waiting.

Jesus Rivero, 26, said that he and his brother Jonathan, 37, were among them and that in their case the new rules were applied retroactively.

“They took us out without telling us anything. ... They treated us as criminals. Without letting us ask anything, they took us out and put us on a bus and when it stopped we saw that they had taken us to the pedestrian bridge between the United States and Mexico,” Rivero said.

It is not known if the Venezuelans held at other detention centers near the border were also deported on Thursday, a day after the Biden administration announced measures to stop the flow of thousands of Venezuelans walking through Central America and Mexico to reach the U.S. border.

The administration had announced on Wednesday that it reached a deal for Mexico to accept Venezuelan migrants deported from the United States.

The new policy, which was questioned by leaders of the Venezuelan community, who expected a more humane treatment for the thousands of Venezuelans seeking to escape the Nicolás Maduro regime, is part of a program that allows sponsoring the legal entry of up to 24,000 Venezuelans a year.

Announcing the new policy on Wednesday, Biden administration officials said it was “unequivocal” that the policy would not apply retroactively to Venezuelans already in the country.

“They will not be sent back,” one senior administration official said. “This program is exclusively forward-focused on those who will be arriving after the announcement. So the answer to that is an unequivocal no.”

“Individuals who are in the U.S. with a final order of removal may be subject to removal depending on a variety of factors, but this process in itself does not apply to individuals who are already in the United States,” a second senior official said.

The deportations of Venezuelans who were already inside the United States represent a great injustice, commented the former Venezuelan ambassador to the United Nations, Diego Arria.

“I understand perfectly well the problems of the immigration situation in the United States, but for this group of Venezuelans who have suffered going through the Darien jungle… that this law is applied retroactively to them seems really very unfair,” Arria said. “Hopefully it will be reviewed, because these people would then be penalized in a way that could even be illegal.”

Maria Figueredo, who was part of the group in which the Rivero brothers were, said that it took her almost a month to reach the U.S. border on a journey that took her through Colombia and almost all the countries of Central America.

She assumed great risks to reach the U.S. border, facing the constant danger of being killed or injured crossing the inhospitable Darién jungle between Colombia and Panama or of being robbed or sexually assaulted along the way.

Figueredo said she spent most of her savings during the journey, having been forced to pay exorbitant prices to buy food or a bottle of water or Gatorade.

Irvin Jose Cañate, 39, said that in addition to these dangers, the Venezuelan immigrants faced additional obstacles in Mexico, but not from wild beasts or bandits, but from the police who tried to stop their advance.

“We had to go through the bush to avoid immigration checkpoints, and there were times when the police confronted us. Sometimes they tried to attack us,” said Cañate, whose journey took 24 days and who had also arrived before the new measures were announced.

“When we arrived in the United States we thought we had reached our goal. We were excited, happy, we came with many dreams”, he said.

More than 6.8 million Venezuelans have fled their country since leader Nicolás Maduro tightened his grip on power and precipitated an economic and political crisis. Almost two million Venezuelan refugees have found refuge in Colombia.

But recent months have seen a growing number of Venezuelans heading to the United States, traveling hundreds of miles often on foot through Central America. In the past year alone, more than 150,000 were found crossing the southern border into the United States.

Venezuelan opposition leaders say most of those who have left are fleeing what they describe as the worst humanitarian crisis in Latin American history, amid an economic collapse that has sent the nation’s Gross Domestic Product plummeting by more than 70% during the period that Maduro has been in power.