US and Mexico reach agreement on plans for Venezuelan migrants 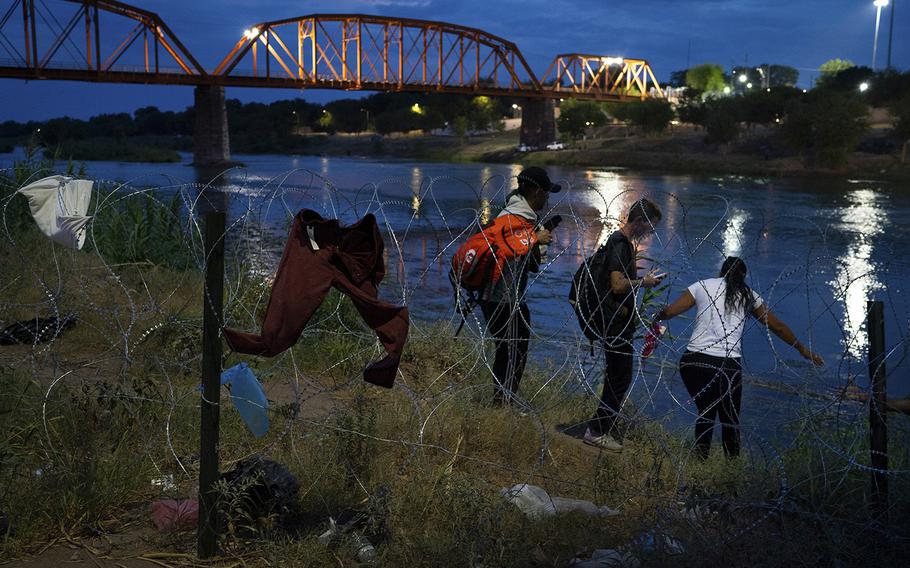 Migrants walk along the Rio Grande in the United States near the Eagle Pass-Piedras Negras International Bridge minutes after wading across the river from Mexico. They later turned themselves into Border Patrol and were transported to a nearby government processing center. (Sarah L. Voisin/Washington Post)

The United States and Mexico reached an agreement that will allow U.S. authorities to send some Venezuelan migrants back across the border while expanding opportunities for others to apply for legal entry through U.S. consulates abroad, officials said Wednesday.

The arrangement is modeled after Biden administration program that has allowed nearly 70,000 Ukrainians to enter the United States over the past year with a legal status known as humanitarian parole. Applicants must have a person or organization willing to sponsor them financially, and present themselves at U.S. consulates abroad, not at the U.S.-Mexico border.

Venezuelans approved for the program will be allowed to fly to the United States and seek faster approval for work authorization, instead of attempting a dangerous overland journey.

"The actions the United States and Mexico are announcing today are intended to address the most acute irregular migration and help ease pressure on the cities and states receiving these individuals," the Department of Homeland Security said in a statement.

"Effective immediately, Venezuelans who enter the United States between ports of entry, without authorization, will be returned to Mexico," the statement said. "At the same time, the United States and Mexico are reinforcing their coordinated enforcement operations to target human smuggling organizations and bring them to justice."

The Mexican government said the U.S. has agreed to allow 24,000 Venezuelans to reach the United States by air under the terms of the accord. Mexico, in an effort to discourage Venezuelans from heading directly to the border, will agree to accept Venezuelan migrants under Title 42, a pandemic measure ostensibly designed to protect public health.

Deporting Venezuelans from the United States or Mexico has been difficult because the Venezuelan government has frequently refused to allow deportation flights into the country. Mexico has reluctantly accepted U.S. demands on Title 42 since the policy was implemented in 2020. But it would not previously accept Venezuelans largely because of the deportation challenges.

Mexican officials say the program will work only if the U.S. agrees to accept a significant number of Venezuelans under the new visa program, so that migrants believe they have a viable alternative to transiting through Central America.

"We will be watching the program to make sure the numbers are sufficient," said a Mexican official who spoke on condition of anonymity to discuss the agreement.

The Department of Homeland Security announced Wednesday an increase the allotment of work visas, adding 65,000 H2-B visas for temporary non-agricultural workers. Of those, 20,000 visas will be reserved for people from Central America and Haiti, according to the department.

With a record number of Venezuelan migrants entering the United States across the southern border in recent months, Biden officials have been scrambling to head off a humanitarian and logistical emergency created by the influx.

Most of the migrants sent on buses by the Republican governors of Arizona and Texas to northern U.S. cities are Venezuelans. New York City mayor Eric Adams said his city's shelter system has been overwhelmed by their numbers, declaring a crisis.

Administration officials familiar with the plan said the agreement has been contingent on getting Mexico to agree to take back more migrants expelled by U.S. authorities using Title 42.

Mexico has limited the number of migrants it receives, citing its shelter capacity limits, and has allowed the U.S. to return relatively few Venezuelans.

Roughly 1,000 Venezuelans have been crossing the U.S. southern border per day in recent weeks, according to the latest available data from U.S. Customs and Border Protection.

One official familiar with the program expressed skepticism that the U.S. program would be successful if Mexico only agrees to the return of a few hundred migrants per day at the border.

U.S. authorities have virtually no ability to send Venezuelans back to their home country on deportation flights, because the U.S. does not recognize Venezuelan leader Nicolas Maduro as the country's legitimate president.

Venezuelans who aren't "expelled" to Mexico under Title 42 would continue to be allowed to enter the United States, and if the new program generates backlogs and long queues at U.S. consulates abroad, some of those applicants may not be willing to wait.

Nearly 7 million Venezuelans have left their homeland since 2013, according to the latest United Nations estimates. Many settled in Colombia, Peru and other South American nations, but have opted to make the journey north to the United States in search of better security and economic opportunity.

The Biden administration attempted to end the Title 42 public health policy but was blocked in federal court in May.

Critics said the agreement with Mexico appeared to be another indication of the administration's dependency on Title 42.

"The contours of the Humanitarian Parole Program for Venezuelans have not been presented to us, but we are extremely disturbed by the apparent acceptance, codification, and expansion of the use of Title 42, an irrelevant health order, as a cornerstone of border policy. One that expunges the legal right to asylum," said Thomas Cartwright, an immigrant advocate with the group Witness at the Border.

Miroff reported from Washington, D.C., and Sieff from Mexico City.