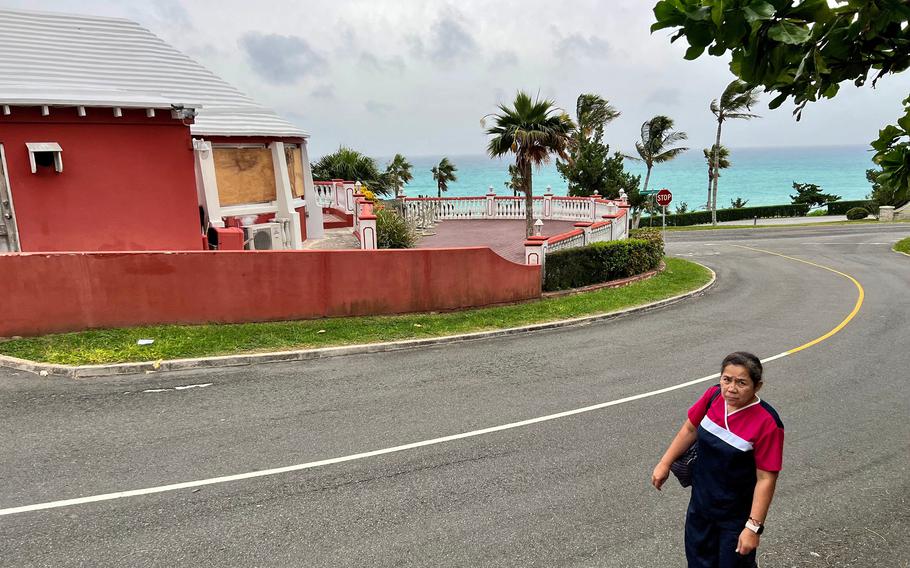 A woman walks by a closed restaurant with boarded up windows in Horseshoe Bay, Bermuda, as Hurricane Fiona churned towards the Atlantic island as a powerful Category 4 storm on Sept. 22, 2022. (Sebastien Vuagnat, AFP/TNS)

SAN JUAN, Puerto Rico (Tribune News Service) — The U.S. Department of Homeland Security on Wednesday granted a “temporary and targeted” Jones Act waiver for Puerto Rico, allowing the island to immediately receive shipments of badly needed fuel as it attempts to recover from the destruction left behind by Hurricane Fiona.

The decision ends days of pressure from island leaders and U.S. lawmakers to grant an exemption to the act, which prohibits foreign ships from delivering supplies from one American port to another. It disproportionately affects Puerto Rico because it is an island and heavily relies on shipping imports to meet basic needs, including food.

“In response to urgent and immediate needs of the Puerto Rican people in the aftermath of Hurricane Fiona, I have approved a temporary and targeted Jones Act waiver to ensure that the people of Puerto Rican have sufficient diesel to run generators needed for electricity and the functioning critical facilities as they recover from Hurricane Fiona,” Alejandro Mayorkas, secretary of Homeland Security, said in a statement.

Mayorkas added that the decision was made in consultation with Departments of Transportation, Energy, and Defense and with the input of Puerto Rico Gov. Pedro Pierluisi.

Mayorkas’ statement did not specify if it would apply to shipped goods beyond fuel and did not say how long the exemption that was granted would last. The statement also reaffirmed broad U.S. government support for the Jones Act, which it described as “maintaining the strength of the American shipbuilding and maritime industries.”

On Tuesday, Pierluisi released a letter asking President Joe Biden to allow non-American cargo ships to deliver fuel to the island, saying that the need for fuel, and particularly diesel, was going up and supplies were dwindling quicker than expected. He added that the island’s government was distributing diesel to keep hospitals and other critical infrastructure afloat, while residents used it for daily needs.

“A shortage of diesel and other fuel products will have an impact on our ability to provide essential services to citizens in Puerto Rico, thus affecting public health, security and continuity of government functions,” the island’s top official wrote.

Earlier this week, a cargo ship that did not fly an American flag brought diesel supplies to the island, but could not dock.

The Merchant Marine Act of 1920, known as the Jones Act, mandates that only American ships, with U.S. owners, flags, and crews can deliver supplies from ports within the country.

The last time Puerto Rico was exempted from the Jones Act was in 2017, when former President Donald Trump lifted the measure. That waiver lasted 10 days.