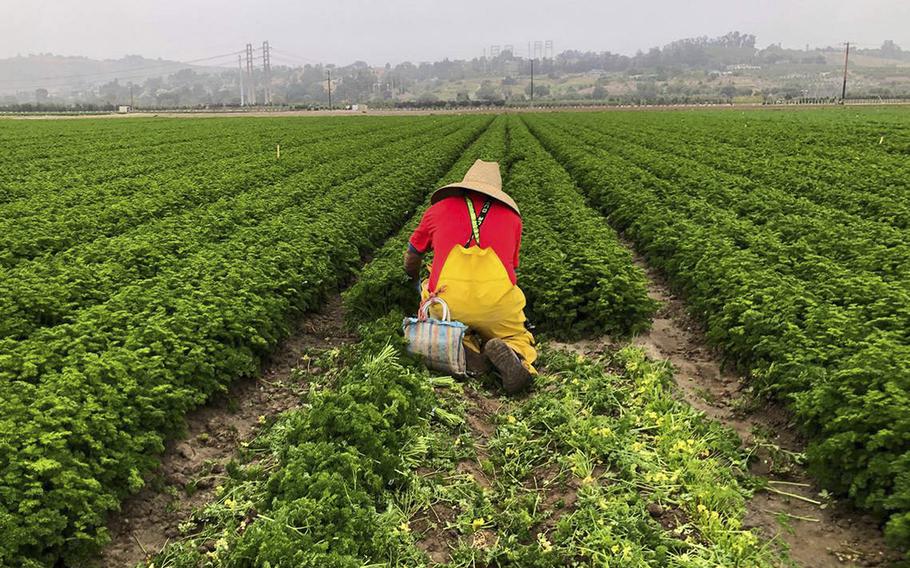 A farmworker works in the radish harvest in Moorpark, California, on June 3, 2022. (Melissa Montalvo/The Fresno Bee/TNS)

SACRAMENTO, Calif. (Tribune News Service) — With hundreds of bills awaiting Gov. Gavin Newsom's veto or approval, dozens of undocumented immigrant workers and allies are crossing the state in a two-day vehicle caravan to pressure him to sign legislation that would extend unemployment benefits to all Californians regardless of immigration status.

The caravan is slated to begin Tuesday morning in Ontario and make stops in Pasadena, Oxnard and Fresno in the afternoon. The caravan will continue to San Francisco on Wednesday.

Participants are hopeful the two-day effort will bring the needs of California's undocumented workers back to the forefront and lead Newsom to create the Excluded Workers Pilot Program. If the program is approved and funded, undocumented and unemployed workers could qualify for $300 a week for up to 20 weeks between Jan. 1, 2024 and Dec. 31, 2024.

Yet, these workers are ineligible for unemployment benefits because of their immigration status, said Sarait Martinez, executive director of Centro Binacional para el Desarrollo Indígena Oaxaqueño, or the Binational Center for the Development of Oaxacan Indigenous Communities.

"It is time to end the exclusion of workers because of their immigration status when they continue to provide for the economy," Martinez said.

Rosa Hernández is among those who would benefit from the proposed pilot program.

Hernández, an undocumented farmworker living in Madera, has been unemployed since the COVID-19 pandemic started. She and her husband, who is also undocumented, moved to California in 1999 from the town of Juxtlahuaca in the Mexican state of Oaxaca. They have six children, all born in California.

"I've always worked in the fields since I moved here," Hernández said in Spanish.

"Unfortunately when the pandemic started, doors closed on us because baby sitters didn't want to take care of kids since they were afraid of getting sick, so my husband was the only one that could work and I had to stay home," she added.

Hernández said the family has struggled to get by on one paycheck. They don't have good insurance and don't qualify for state financial assistance like stimulus checks.

She's managed to pay her rent — moving with six kids and leaving her home behind wasn't an option — but still owes $700 to someone who loaned her money for bills.

Hernández said she hasn't returned to work because she has a daughter that just entered kindergarten and there were no openings for field or packinghouse jobs when she recently applied.

Hernández is unable to participate in the caravan, due to a lack of childcare, but says the pilot program would be very helpful for her family and others.

"Truthfully, as undocumented workers, we have very little help and cannot claim anything because we're not eligible," Hernández said.

"But we're here and we're not leaving," she added. "Our only option is to continue fighting and surviving, because returning to our home countries is not an option. Things are worse there."

"In a state with one of the nation's highest costs of living, such wages are not enough for families to subsist on," they said.

There weren't funds allocated for the program in this legislative cycle's budget, according to Sasha Feldstein, director of economic justice policy at the California Immigrant Policy Center. By signing the bill and creating the program, Newsom would open the path for the program to be funded next year, Feldstein said.

An investment of $597 million would provide enough wage replacement for most undocumented Californians for a year, according to a UC Merced report cited by the state's Senate Committee on Labor, Public Employment and Retirement.

As of now, unemployment benefits are distributed by the state's Employment Development Department. People are only eligible for those if they are legally allowed to work in the country and were fully or partially unemployed due to a layoff, furlough, reduced wages, or reduced hours, The Bee previously reported.

The pilot program is separate from the state agency and would guarantee unemployment benefits to undocumented people who become unemployed for the same reasons.

Feldstein said undocumented workers will remain highly vulnerable, unless they have access to a safety net.

"The COVID-19 pandemic is not the first crisis to hit California, and it won't be the last," she said. "Instead of having to scramble every time disaster hits, we should be investing in our collective future now to ensure that no one is excluded."

If Newsom signs the bill, California would be the third state to approve such legislation. There is bipartisan support for the measure and no identified opposition, according to legislative analyses.

"California has always been a leader for immigrant rights, but this is one area where we're actually behind a couple of other states," Feldstein said, referring to similar legislation approved in New York and Colorado.

If the governor doesn't sign the bill this week, Martinez of Centro Binacional said the SafetyNet4All coalition — which includes more than 100 partnered organizations supporting the bill — won't give up.

"We're still going to continue to advocate to make it a program next year," she said.