Days before the five-year anniversary of Hurricane Maria killing thousands in Puerto Rico, another storm clobbered the island archipelago this week and set back its halting progress toward modernizing its fragile infrastructure.

Hurricane Fiona battered parts of Puerto Rico’s south and central mountain regions with more than 20 inches of rain - causing flash flooding, triggering mudslides and leaving the entire U.S. territory without power. Much of the island remained inaccessible Tuesday, delaying a full assessment of the devastation.

The southeast part of the large island was deluged by rain, with many areas getting more than 20 inches and some areas receiving over 25 inches. Fiona dumped more than 32 inches on the Ponce region, where the island’s second-largest city is located, and prompted emergency crews to rescue 400 people from flooding in Salinas, on the southern coast.

The rainfall and hurricane winds proved too much for Puerto Rico’s decrepit electrical grid. The system has failed to significantly modernize since Hurricane Maria in 2017, although Pierluisi said this week that several projects had been in the works.

Roughly 300,000 customers — about 19% of households and businesses in Puerto Rico — had gotten power back as of Tuesday afternoon, according to Luma Energy, a private company that manages electrical transmission for the island’s 1.5 million customers.

“Even a hurricane that’s a lot smaller in comparison brings back those dark memories and those feelings of stress,” said Mariana Ferré, a medical student from San Juan. “The messages I’m getting from all my friends is, ‘I have PTSD,’ “ or post-traumatic stress disorder.

In the hardest-hit areas, muddy water filled streets and crept up the sides of homes. Affected neighborhoods were still, with few cars able to navigate the flooding.

The Guanajibo River in southwest Puerto Rico, near Hormigueros, crested at over 29 feet, beating the previous record of about 28 1/2 feet set during Hurricane Maria.

In the central mountain town of Utuado, floodwaters uprooted a temporary bridge over the Guaonica River and carried it away Sunday. Video captured muddy water washing over the structure and its metal buckling as it bent and then broke.

The Utuado bridge had been set up post-Maria to connect communities until a permanent bridge could be built. A new structure is still being designed and is scheduled to be installed in 2024, officials said.

San Juan, the capital, was spared the storm’s worst effects, and parts were among the first to get power back. Departures from the international airport there resumed Monday afternoon.

But some nearby areas were hit hard by flooding. In Toa Baja, about 16 miles west, water flowed over the top of La Virgencita bridge and made it impassible.

In the southern city of Guayama, the mayor warned that the Guamaní River had overflowed and urged residents not to leave their homes. Video from the area shows downed branches and muddy water rushing down a street.

In another video from Caguas, water surges down a small outdoor staircase and into a house.

“A day of absolute hell,” one of the home’s residents told CBS News.

Landslides broke out in mountainous regions as waterways breached their banks. The Puerto Rico National Guard rescued 21 elderly and bedridden people from a care facility in the mountain town of Cayey on Monday as landslides threatened the home, said Patrick Ryder, the Pentagon’s press secretary.

“What Hurricane Maria brought was wind,” he said. “Lots of wind. Unlike this one, which brought too much water. We are all in the streets checking on landslides.”

“People lost cars. People almost drowning because of the landslides,” Espinosa told the station. “Homes were lost because of landslides.”

As the federal government activates in response, Puerto Ricans are eyeing the efforts skeptically. FEMA, which is tasked with responding to major disasters, admitted in an after-action report to bungling its response to Hurricane Maria.

Top FEMA officials now insist that the agency is far better prepared than in 2017, when many residents lived without power for months.

“We are much better positioned today than we were before Maria,” said Keith Turi, FEMA’s assistant administrator for recovery. 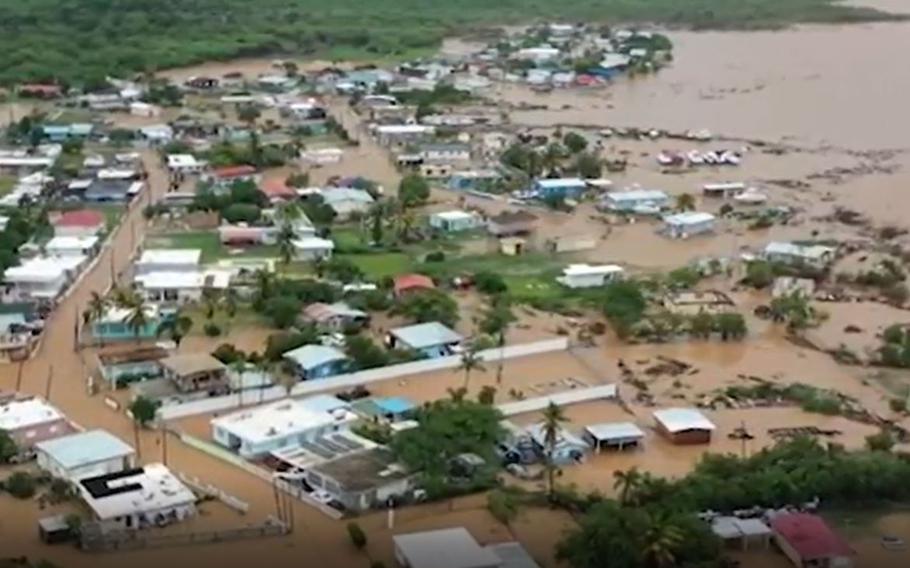