Biden scrambles to shore up Latino support. Is it too late? 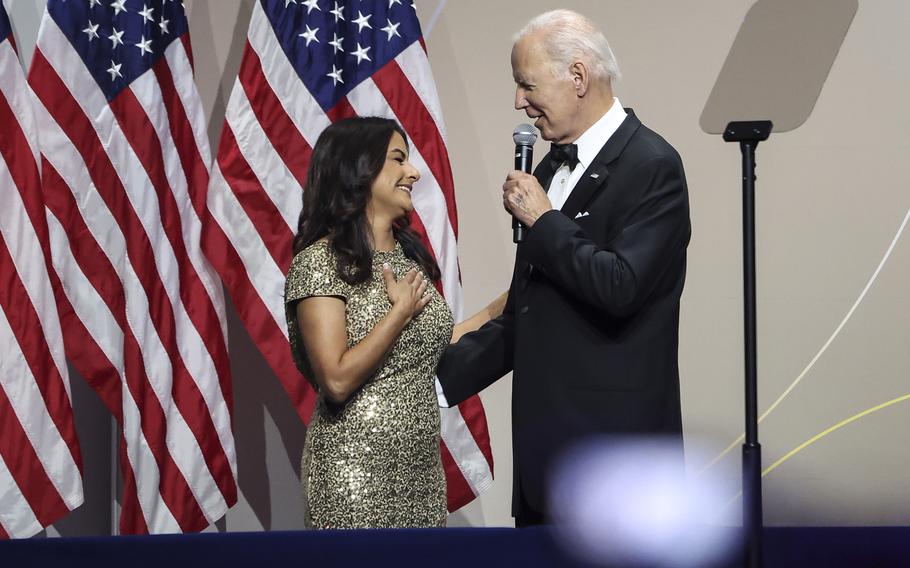 WASHINGTON (Tribune News Service) — A few months after taking office, President Joe Biden invited a group of top Latino leaders to the White House. As they sat around the table, the president was surprisingly earnest. He went as far as to acknowledge, two people familiar with the conversation recounted, that his five decades in politics had given him far more familiarity with the African American community and its top issues than with Latinos and their concerns.

Nearly a year and a half later, Biden and Democrats have delivered on a number of policy promises of deep importance to Latinos. But some Latino activists worry voters aren’t aware of all that’s been done, and others worry that the blinkered perspective Biden acknowledged privately has limited Latino representation in his administration.

“I believe there’s a blind spot in the White House and in the Oval Office,” said Thomas Saenz, president of the Mexican American Legal Defense and Education Fund, who pointed to a lack of Latino appointees in key roles across the executive branch. “It’s clear that the president himself doesn’t have an understanding of the Latino community.”

With Hispanic Heritage Month underway and the midterm elections seven weeks away, Biden and aides have launched a robust outreach effort aimed at ensuring this crucial voting bloc appreciates the sum of Democrats’ accomplishments.

Last Thursday, the administration’s director of Hispanic media led off the daily briefing in Spanish. That evening, Biden spoke at the Congressional Hispanic Caucus Institute’s annual dinner in Washington.

On Friday, the main outside group supporting Biden’s agenda, Build Back Together, launched a six-figure ad campaign targeting Latinos in three battleground states.

“The failure to message or be intentional about communicating with Latino voters could very much impact the outcome of these midterm elections,” said Janet Murguía, president of UnidosUS, a Hispanic advocacy organization based in Washington. “We’ve not been ignored. I just don’t think they’ve optimized the Latino vote the way that they could.”

But Biden’s approval rating with Latinos is just 58%, a number that might be higher with stronger direct outreach to Latino voters. More than half of Latinos the poll surveyed — 51% — said they’ve yet to be contacted by any political party, campaign, or any other organization.

Sending working families $1,400 pandemic relief checks, canceling as much as $20,000 of student loan debt and enacting the first gun safety reforms in 30 years after the mass shooting in Uvalde, Texas, this year are “overwhelming policy successes,” said Chuck Rocha, a Democratic consultant and advisor on Latino outreach to Sen. Bernie Sanders, I-Vt. “The problem is the Latino voters don’t know about it. You don’t see ads talking about the litany of successes this White House has delivered for the Latino community.”

If Latinos don’t know about Biden’s policy agenda, it’s not necessarily for Democrats’ lack of trying. Mayra Macías, the chief strategy officer for Build Back Together, said the group has spent more than $35 million on advertising aimed at Latinos since the organization launched last year.

“We’ve been doing paid advertising with the Latino community since Day One,” she said in an interview. “Now, there are more wins to sell.”

Several of those wins — the Inflation Reduction Act, which expands access to healthcare and reduces the cost of prescription drugs, and Biden’s student loan debt forgiveness — were enacted in August. “We need more time to get all of this information out there,” Macías said. “But we have this incredible opportunity with all of the legislation that’s just recently passed.”

The Uvalde shooting in May, when 19 schoolchildren and two teachers were killed when an assault rifle-wielding gunman stormed their classroom, galvanized more Latinos around gun safety. And the Supreme Court’s overturning of federal protections for abortion in June has activated many more Latinos around protecting reproductive choice.

In last week’s National Association of Latino Elected and Appointed Officials tracking poll, abortion rights were a top-three issue for 28% of respondents — a huge jump from 2018, when only 4% listed it as such. The same poll showed that 77% of Latinos now support a ban on assault weapons.

Only one issue was a higher priority for Latinos: the rising cost of living and inflation, which 48% of respondents listed as a top-three concern. Although gas prices have come down in recent months after spiking following Russia’s February invasion of Ukraine, Democrats know pocketbook issues remain a potential liability for them.

“One of the first things that comes out of people’s mouths when I talk to them in the district is gas prices,” said Rep. Tony Cárdenas, D-Calif. “If gas prices weren’t where they were, then people would be talking more about what we have done.”

In those conversations, Cárdenas said he looks to focus constituents on all the things Democrats have done to help working families, as well as last year’s bipartisan infrastructure overhaul.

“Biden has a lot to brag about. But something people don’t realize is that over 50% of construction workers are Latinos,” he said. “That infrastructure bill is a tremendous boost to millions of Latino households.”

Despite all that Biden has accomplished in two years, many Latino activists believe the administration has missed opportunities to solidify support and stop a slow but significant uptick in Latino support for Republicans.

According to the tracking poll, more than 50% prefer a generic Democrat, but 35% of Latinos prefer a Republican candidate, a notable increase from the 2018 midterms, when that number was at 22%. A Siena College/New York Times poll of Latinos this week mirrored those results, detailing how the GOP has made inroads with Latinos, particularly around economic issues and in the South.

“We’ve been in trouble with Latinos for a long time. Support has gone down, down, down,” said Joshua Ulibarri, a Democratic pollster focused on Latinos. “Biden isn’t to blame for that but it’s up to him to stop the bleeding.”

Ulibarri was not alone in listing marijuana legalization as an avenue for boosting support in Latino communities, where individuals are disproportionately arrested and jailed for drug crimes. But the most common area of frustration among Latino activists and political operatives was that too few Latinos have been appointed to positions in the White House and across the executive and judicial branches.

Although Biden appointed a historic four Latinos to his Cabinet, there have been no Latinos appointed as assistant attorneys general at the Justice Department, no Latinos named to the Equal Employment Opportunity Commission that addresses workplace discrimination, and no Latino leadership at the Occupational Safety and Health Administration.

“Appointments send a message,” said Saenz of the Mexican American Legal Defense and Education Fund and a former counsel to Los Angeles Mayor Antonio Villaraigosa. “This goes far beyond the notion of progress. We have actually seen some regression in comparison to the Obama administration.”

Saenz and his organization have called for Biden to nominate more Latinos to the federal bench.

The highest-ranking Latino working in the West Wing is Julie Rodriguez, director of the White House Office of Intergovernmental Affairs. In June, she was elevated to the title of assistant to the president, a response in part to pressure from outside groups frustrated that Biden didn’t have any Latinos in that role.

In an interview, she pushed back on the criticism that Latinos are underrepresented in the administration. “The representation is broader and deeper than I’ve ever seen it in my experience in government,” said Rodriguez, who added that Biden’s directive to prioritize diversity isn’t merely about meeting a quota with personnel. “No matter who you are, you have a clear mandate from the president to ensure there’s equity across the agencies and in our policies.”

After proposing an immigration reform bill on his first day in office, the symbolic fulfillment of a campaign promise, Biden has steered his legislative agenda in other directions. Even as migrants have overwhelmed the southern border, prompting a daily drumbeat of criticism from Republicans, the White House has been reluctant to engage, determined to focus elsewhere.

“Biden promised me personally that he was going to get it done in the first 100 days,” said Héctor Sánchez Barba, chief executive of Mi Familia Vota. “But it’s the same story over and over. And it’s unacceptable.”

But whatever frustrations exist, they will be weighed against the alternative of a Republican Party increasingly dominated by xenophobia and demagoguery. As Democrats begin their final messaging blitz in the run-up to the Nov. 8 election, they are presenting their own accomplishments in contrast to Republicans, casting the GOP as extreme and working to frame the election as a choice between two parties and visions, not a referendum on Biden and Democrats in Congress.

“We as an administration are continuing to really deliver for Latino families,” said Rodriguez, the assistant to the president. “And what we’re seeing in terms of the political kind of ploys that are coming from folks on the other side right now, using taxpayer dollars to exploit migrants that are fleeing communism — it just couldn’t be a clearer contrast in terms of who’s fighting for the community and who has the community’s best interest in mind.”