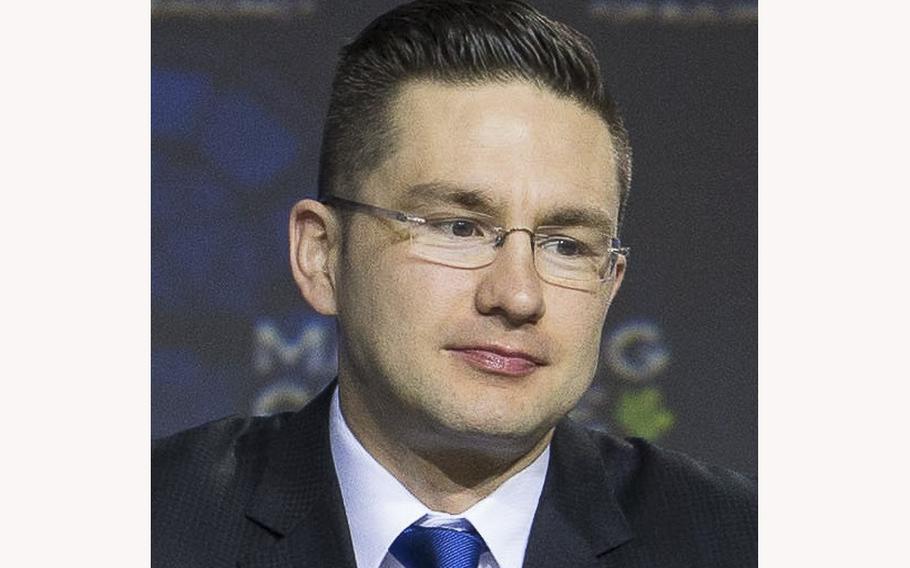 TORONTO — Canada's recently hapless Conservatives, losers of three straight federal elections that exposed divisions between their populist and more moderate factions, are poised on Saturday to elect a 43-year-old firebrand with a scorched-earth style and social media savvy as their new leader to take on Prime Minister Justin Trudeau.

All indications are that Pierre Poilievre has the contest it in the bag.

"Our institutions are screwing over an entire generation of working class youth," he said in June. "But elite gatekeepers think the biggest problem is I'm calling it out. They only want to protect themselves."

His campaign says it has signed up more members than the entire Conservative Party in the previous two leadership races. In this year's second quarter, he raised more money from donors than his leadership opponents combined. He earned an endorsement from Stephen Harper, Canada's last Conservative prime minister.

Poilievre's main opponent is former Quebec Premier Jean Charest, 64, a former leader of the federal Progressive Conservative Party. A veteran politician, he has pitched himself as more moderate than Poilievre, able to expand the party's big blue tent while keeping its various factions united.

Patrick Brown, the mayor of the Toronto suburb of Brampton, Ontario, was disqualified in July amid allegations that he violated federal elections law on selling party memberships, among other complaints. (Brown denied wrongdoing; he accused the party, without evidence, of working to ensure Poilievre was elected.)

"This time, it's not going to be close . . . unless something bizarre or miraculous happens," said Richard Johnston, a professor emeritus of political science at the University of British Columbia. "It's going to be a blowout."

The vote, which uses a ranked ballot, is restricted to dues-paying members of the Conservative Party. A record 678,000 have been eligible to vote in this year's contest and nearly 418,000 ballots have been accepted - the most for the election of a federal party leader in Canada's history.

The party said Friday it would revise its leadership convention program to reflect the death this week of Queen Elizabeth II, who was Queen of Canada and the country's head of state.

A record number of members were also signed up during the last Conservative Party leadership contest, in 2020. They chose Erin O'Toole, a lawyer and military veteran, to helm the party. But the enthusiasm for the leadership race didn't translate into success against Trudeau and his Liberal Party.

As he campaigned to become party leader, O'Toole pitched himself as a "true blue" Conservative, who was not a "product of the Ottawa bubble." He pledged to "take back Canada" and to defend Canada's history from "cancel culture and the radical left." He disparaged his chief opponent as "Liberal lite."

But during the federal election last year, O'Toole dropped the "take back Canada" talk and tacked to the center. Critics charged that he was a shape-shifter who would say anything to get elected. Many Conservatives detested O'Toole's moderate platform and reversals on key policy positions.

He won the popular vote, but not a plurality of seats in Parliament. The caucus ousted him as leader in February.

The race to replace him has been marked by personal attacks between the candidates.

"The tone has certainly been discouraging," said Jonathan Malloy, a political scientist at Carleton University in Ottawa. "All the races are going to get scrappy, but particularly early in the race, the attacks were so negative. . . . The personal attacks have really been basically whether someone is legitimately part of the party" and a reflection of the divisions between its factions.

Charest has attacked Poilievre for embracing the self-styled "Freedom Convoy" that clogged Ottawa and blockaded border crossings this year to demonstrate against public health measures, flirting with conspiracy theories about the World Economic Forum and pitching cryptocurrencies as a way to "opt out" of inflation.

"Will the Conservative Party of Canada really go down the road taken by American parties?" Charest asked at a French-language debate in May. "A divisive approach based on slogans . . . or will we do politics in Canada for Canadians? That's the choice I'm offering you. I'm not a pseudo-American here."

Right-wing populism is not new to Canada; it has a long history in the prairies. But it has been a "tougher sell" at the federal level, said Daniel Béland, the director of the Institute for the Study of Canada at McGill University in Montreal, at which voters typically have elected more moderate governments.

For all Poilievre's railing against the political establishment, politics has effectively been his only career.

As a university student, he was a finalist in a "As Prime Minister, I Would . . ." essay contest, arguing for a two-term limit for federal lawmakers, among other pledges. He's now in his seventh term, after first winning election in 2004 to represent an electoral district in the Ottawa suburbs.

Over the years, Poilievre earned a reputation for fierce partisanship with a knack for getting under his opponents' skin. Some criticized what they saw as a smarmy, take-no-prisoners, internet troll approach.

The Canadian Press described Poilievre in 2013 as something of a Pete Campbell from the television drama "Mad Men": The "character everyone loves to hate: young, conservative, ambitious and fabulously snotty."

The style has on occasion landed him in hot water.

In 2008, on the day Harper, as prime minister, apologized for the government's role in the residential school system that separated Indigenous children from their families, he questioned whether there was "value for all of this money" that Ottawa was paying to the survivors. He later apologized.

He became the federal democratic reform minister in 2013. In that role, he oversaw changes to Canada's elections laws that critics said would disenfranchise voters and curtail the independence of the chief electoral officer. Trudeau has since done away with many of the changes.

The next Conservative leader will take over amid high inflation, surging interest rates and concerns about the affordability of housing and groceries. By the next federal election, which is not expected until 2025, Trudeau's Liberals will have been in power for a decade and voters could be fatigued and open to a change.

Analysts say the leader will need to focus on expanding the party's appeal beyond its traditional base in rural Canada and the strongholds of Alberta and Saskatchewan to draw support from young voters and those in the suburbs outside Toronto and Vancouver that are federal election battlegrounds.

Béland said Poilievre's "rhetoric is really strong and it's something that could scare away some moderate voters," but that he "shouldn't be underestimated."

He said his more recent focus on bread-and-butter issues - in one campaign video, he's seated at a diner, reciting for an invisible Trudeau how much the prices of the bacon, coffee, and, yes, bread and butter, have risen - could be a winner.

The new leader will also have to have an eye toward party unity.

"There may be some defections on the other side of the party [if] Poilievre wins," Johnston said. "We'll see how he deals with his caucus. He doesn't seem inclined to graciousness. It seems like he's a sore winner."