What is this thing? ‘Blue goo’ found on floor of Caribbean Sea stumps NOAA explorers (Tribune News Service) — An alien-looking “goo” creature is growing on the floor of the Caribbean Sea and it bears more than a slight resemblance to the shapeless 1950s science fiction monster The Blob.

Scientists with NOAA Ocean Exploration made the discovery, but were at a loss as to what to call it — or even what category of life it fits into.

Multiple examples were found Aug. 30 as a NOAA team explored the sea floor off St. Croix near Puerto Rico, and the only things scientists could seem agree on were it’s “weird,” and it’s “not a rock.”

Video, recorded at a depth of about 1,400 feet, shows the creatures appear formless, faceless and limbless. However, hints of circles on their exterior indicate they may have the ability to retract something, one scientist observed.

The same thing was true of The Blob, which classic film buffs know as a shapeless alien that expanded by absorbing other living creatures — including people.

Multiple debates erupted during the expedition’s live feed over what the creatures might be, with experts alternately calling them “bumpy blue things,” “blue goo” and “blue bio mats.”

“It’s not quite gooish, but doesn’t seem particularly not gooish,” one scientist observed in the video feed. 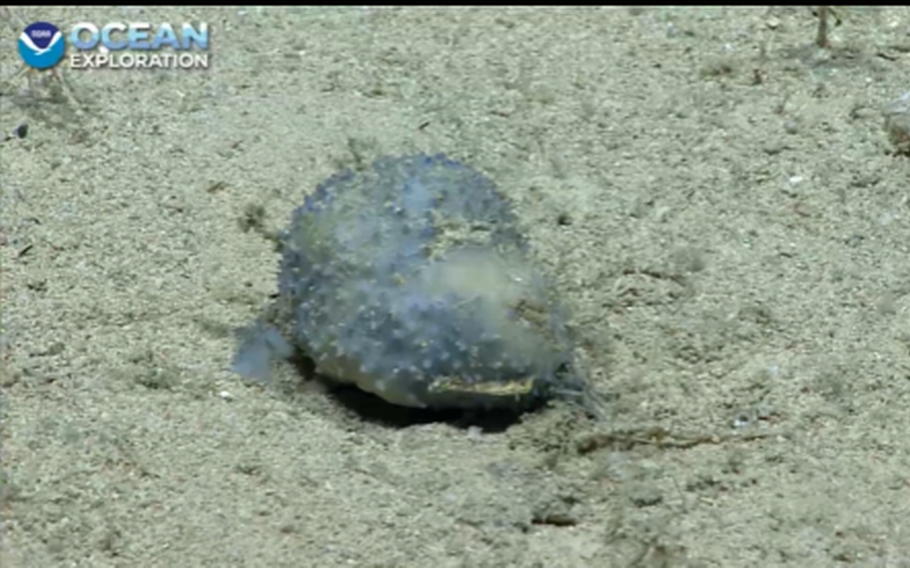 The team eventually settled on three possibilities: A soft coral; a tunicate, or a type of sponge. A tunicate is an invertebrate marine animal.

Experts in corals and sponges will be consulted in coming weeks, and may provide a definitive answer, the team reports.

NOAA Ocean Exploration made the discovery during its Voyage to the Ridge 2022 expedition, which is collecting data on “unexplored and poorly understood deep water areas” off the East Coast, including the Mid-Atlantic Ridge and Azores Plateau.

Recent dives have spanned depths of 820 to 19,685 feet, and visited areas that have frequent earthquakes and “spectacular hydrothermal vents” sprouting from the sea floor.

In July, the expedition stumbled onto another mystery during the mission: Organized lines of holes on the seafloor. Multiple examples were found, but the team found no evidence of what created the holes or why.

“While they look almost human made, the little piles of sediment around the holes make them seem like they were excavated by ... something,” NOAA reported.