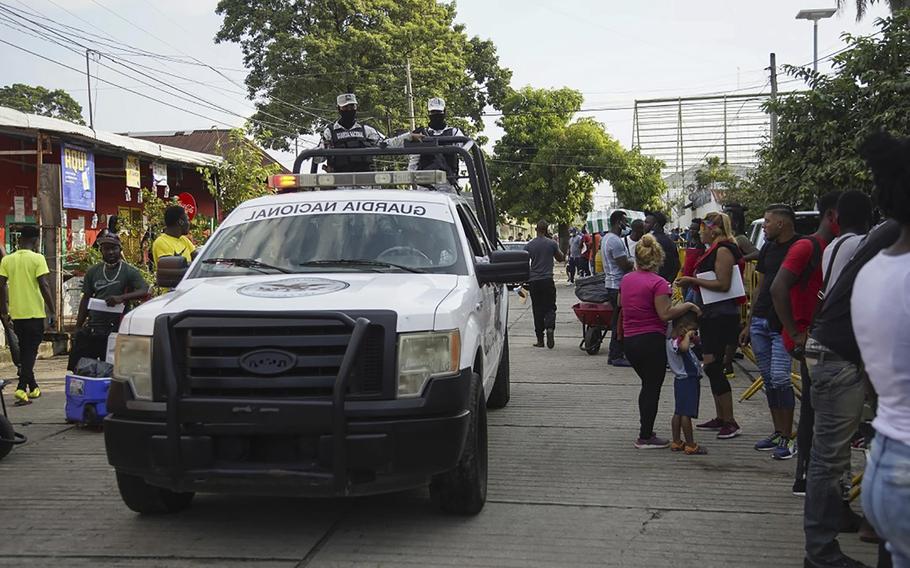 Members of the Mexican National Guard patrol the street outside one of the asylum offices in Tapachula, Mexico. (Alejandro Tamayo/San Diego Union-Tribune/TNS)

MEXICO CITY (Tribune News Service) — Mexico's Chamber of Deputies passed a bill late Friday that brings the national guard under control of the Defense Ministry in a move likely to be challenged in court.

The bill, which now goes to the Senate, is another step in President Andres Manuel Lopez Obrador's increasing militarization of the country's life, according to the opposition, which voted against the proposal.

Lopez Obrador said last month he expected the opposition to challenge the bill in the Supreme Court. The constitution designates the guard as a civilian organization, but Lopez Obrador's ruling coalition didn't have the votes to pass a constitutional amendment, instead fast tracking the proposal through Congress.

Lopez Obrador took a similar path on energy policy, failing to pass a constitutional reform but succeeding in getting the Supreme Court to uphold parts of a change to secondary laws.

Despite campaigning on a promise to demilitarize Mexico, Lopez Obrador has come under attack from human rights groups and from within his own government for propelling the armed forces into ever more aspects of Mexican society. His transport minister quit in 2020 when AMLO ordered that the navy take charge of the country's ports, shortly after putting the army in control of customs.

Having already employed the military to build a new Mexico City airport, AMLO reiterated Tuesday that he wanted the Defense Ministry to take charge of his troubled $20 billion tourist train in the southeast of the country and of two more regional airports.

Lopez Obrador created the national guard in 2019, pulling members of the military into the new civilian police force as part of his efforts to stem drug-related violence. He argues that bringing it under the aegis of the defense ministry is about ensuring the guard's professionalism and incorruptibility.