Indigenous leaders get a choice: Join the narcos or run for your lives 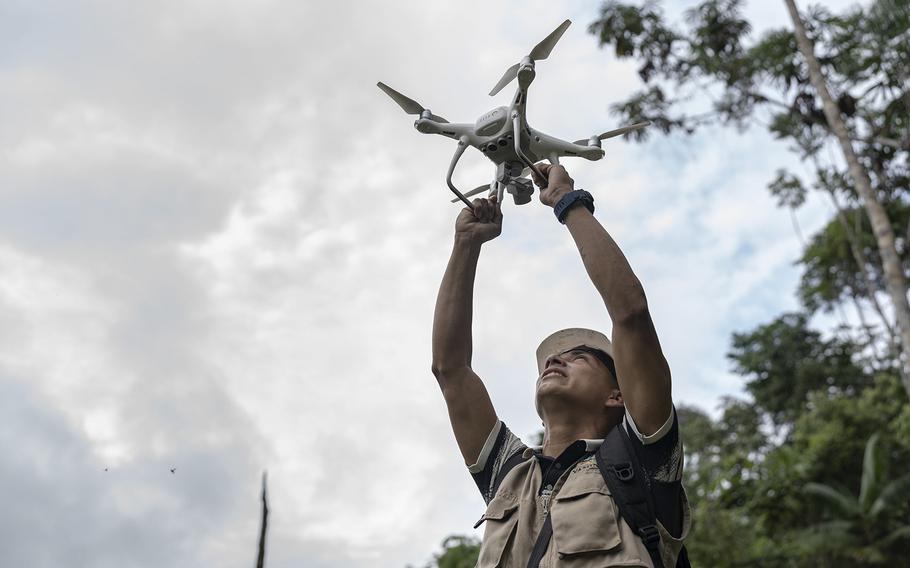 A monitor launches a drone to survey the illegal coca crop in Ucayali, Peru. (Angela Ponce for The Washington Post)

YAMINO, Peru - For Herlin Odicio, the stranger's offer was life-changing.

The man, who had shown up unannounced in this remote Indigenous village speaking Spanish with a Colombian accent and calling himself "Fernando," was proposing to pay Odicio $127,000 for each planeload of cocaine paste that took off from his community's land.

In return, Odicio, the elected leader of the Cacataibo people, would stop complaining to authorities about the drug traffickers destroying the rainforest to make way for coca fields, processing labs and airstrips.

The money would be transformative. Many of the estimated 4,000 Cacataibo, tucked out of the world's view here in the lush Peruvian Amazon, live without electricity or running water. They get by largely on subsistence farming, hunting and fishing.

Still, Odicio turned it down.

"I couldn't sleep after that, but I couldn't betray my people," he says. "I couldn't have lived with myself. No good will come to us from narcotrafficking."

For the 36-year-old leader of the Native Federation of Cacataibo Communities, rejecting the offer in September 2020 was the beginning of a nightmare that continues to this day. Graphic death threats by phone, text, social media and, worst of all, passed on by his neighbors, led him to take his family into hiding. He now returns to Yamino only occasionally and is poised to give up his leadership role among the Cacataibo.

His fears are well founded. Since the start of the coronavirus pandemic, an estimated 20 Indigenous leaders - four of them Cacataibo - have been killed in this frequently lawless territory, many by hit men believed to have been hired by narcotraffickers or associated loggers, as the cultivation of coca spreads from the Andean foothills to the Amazonian lowlands. 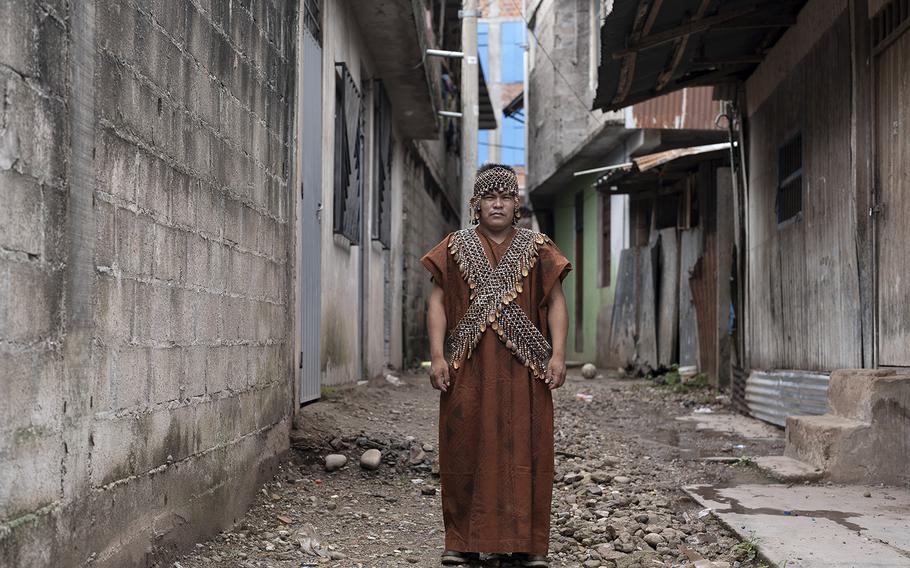 Herlin Odicio, 36, president of the Native Federation of Cacataibo Communities, in Aguaytía, Peru. (Angela Ponce for The Washington Post)

"If we continue like this, with the advance of narcotrafficking, this region will become a second VRAEM," says Angel Gutiérrez, the interim governor of Ucayali, referring to Peru's principal coca-growing zone. The VRAEM - the Valley of the Apurímac, Ene and Mantaro rivers - produces as much of the leaf as Bolivia.

The reasons for the spread are complex. Ricardo Soberón, head of the national counternarcotics agency Devida, cites rising demand and the slowdown of trade through Peru's Pacific ports during the pandemic. That made the migration of cultivation eastward, closer to the Colombian, Brazilian and Bolivian borders, a logical alternative.

Soberón believes another factor might be an increased police and military presence in the VRAEM. The hilly, forested terrain is also the hideout of the last remnants of the Shining Path, who focus more now on providing protection for the narcos than Maoist revolution. The group's leader, Víctor Quispe Palomino, known as Comrade José, was wounded in clashes with security forces this month but remains at large in the valley.

Yet clamping down on cultivation in one part of the Peruvian Amazon, a frontier zone twice the size of California, often just causes it to surge in new areas in a never-ending game of whack-a-mole. Critics warn there can be no solution without addressing the fundamental economics - including demand in the world's largest market for cocaine: the United States.

With three harvests a year, each typically yielding $700 to $1,400 per hectare before labor, pesticides and other costs, coca is far more profitable than other Amazonian crops, even with the risks associated with the illicit trade. 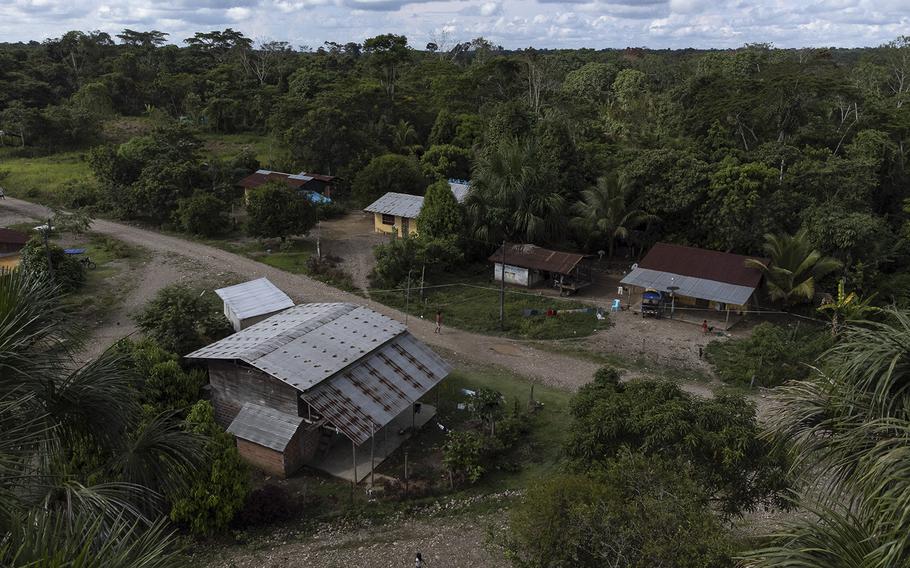 An aerial view of Yamino, Peru, home to Cacataibo people. (Angela Ponce for The Washington Post)

The encroachment of cultivation on Yamino and similar communities has piled further pressure on the region's Indigenous groups, who were already struggling with inequality, acculturation and the loss of languages. The narcotraffickers' bloodletting is the latest assault on the Indigenous groups' unique cultures, which developed over millennia in the rainforest but have been under assault since the rubber boom kicked off in the 19th century, including massacres by the Shining Path in the 1980s and 1990s and rampant illegal logging more recently.

Many Indigenous communities here in Ucayali are now hemmed in by coca fields, their leaders' lives under threat. The Washington Post, accompanied by volunteer monitors from Yamino, saw several coca plantations, and the toxic remains of processing labs, a short bushwhack from Odicio's village.

In Brazil, the main driver of deforestation is beef. In Peru, it's believed to be coca. The country is the world's second-largest source of the plant, whose leaf is the key ingredient in cocaine, after Colombia.

Cultivation in Ucayali jumped from 1,734 hectares in 2019 to 10,229 hectares in 2021, according to Devida. Meanwhile, the regional government's forestry agency has spotted 57 clandestine airstrips carved into the rainforest.

Given prohibition, global demand and the comparatively low returns for cacao, coffee and other legal crops, Soberón says, that growth has been inevitable - as has been the narcoviolence that has come with it.

"What has happened to Herlin is directly connected to the international price of coffee," he says. "That price should be factoring in cocaine avoided, carbon sequestered and Indigenous people still alive."

In theory, threatened defenders of the Peruvian Amazon are protected by formal guarantees of safety from the Peruvian state. But Odicio says those guarantees aren't worth the paper they're written on. Police visit Yamino about once a year, he says, and have not assigned armed officers to protect him.

"We can't go to the police or prosecutors because they act so slowly anyway," he says. "And before they do, word gets out that we have tipped them off. We're completely on our own."

Gutiérrez, the interim governor - he was appointed after the elected governor was detained in December for alleged graft - acknowledges the problem. 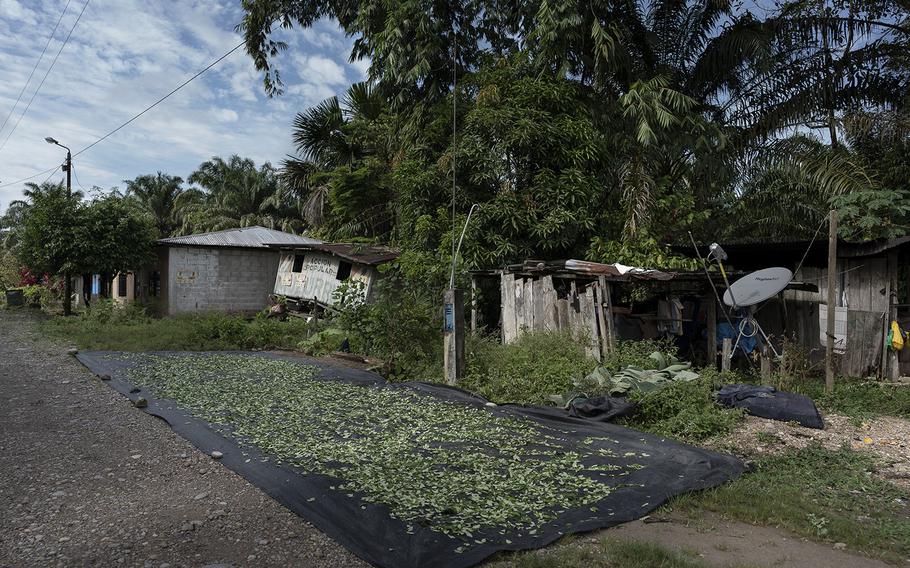 Coca leaves dry in the sun in Yamino, Peru. (Angela Ponce for The Washington Post)

"Corruption is institutionalized at every level in Peru," he says. "That's the sad reality. It's why citizens don't trust their authorities."

He also notes a lack of resources: The Ucayali police have just a handful of pickup trucks and speedboats to cover 40,000 square miles of jungle.

President Pedro Castillo, a populist leftist whose base is the rural poor, including coca growers and Indigenous peoples, has been notably absent on the subject.

The neophyte leader, the target of five separate graft investigations and barely hanging on to power after a calamitous first year, met with Indigenous leaders in June but made no commitments.

One of those leaders - Berlin Diques, the head of ORAU, the principal Indigenous federation in Ucayali - is scathing. "It was uplifting when Castillo was elected," he says. "People felt there was finally a president who would help us. But he's broken every single promise. He's just the same as all the others."

The Interior Ministry, which has been led by seven different ministers since Castillo took office in July 2021, did not respond to requests for comment. A Justice Ministry spokesman agreed there was a need to provide more support to threatened Indigenous leaders but said the government was working to "visibilize" the issue.

Yamino's monitors spend half their time patrolling the village's 112 square miles of communally shared forest using a drone provided by the environment ministry. They also tell the coca growers - often landless migrants escaping grinding poverty in the Andes - that they must leave. Some growers are amicable, monitors say, but others threaten them with machetes and rusty shotguns. 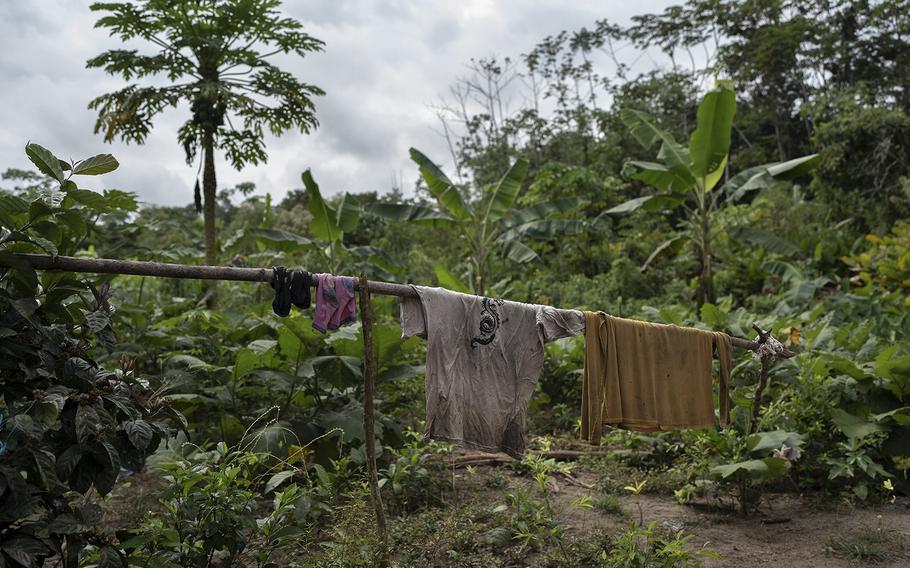 "They know perfectly well they're on our land," says César López, 36. "But they can be quite stubborn. Some of them even ask what we're doing here."

The monitors are careful to avoid the armed men who guard the fields on behalf of the Peruvian, Colombian and Brazilian gangs who buy the coca. From there, it's processed and shipped north to the United States and elsewhere. It's legal to grow coca in Peru, but only for domestic use - principally, the chewing of dried leaves as a mild stimulant. But the crop now greatly exceeds domestic consumption.

At night, strange explosions have shaken the rainforest around Yamino, an effort to intimidate the community, locals say. In the neighboring village of Mariscal Cáceres, they say, armed strangers have halted traffic on the main road in recent weeks to ask the whereabouts of Cacataibo leaders and, on one occasion, pistol-whip a villager.

Traffickers are also now operating in a 580-square-mile reserve for the last remaining uncontacted Cacataibo, according to the Ucayali forestry service, which has conducted overflights. The reserve was created last year after a two-decade campaign, but is now marred by coca fields and two airstrips.

The reserve is the starting point of a corridor inhabited by some of the last tribes on Earth still living in isolation. It runs 300 miles northeast to the Javari, the Brazilian reserve where journalist Dom Phillips, a former Washington Post contributor, and Indigenous advocate Bruno Pereira, were killed in June.

"We can defend our own land, up to a point, but we can't go in there to defend our uncontacted brothers," said Ucaremachi, a Yamino villager. "They're the most vulnerable, even more than us, but if we tried to help them, it would be a bloodbath."

Soberón, the Devida chief, admires the goal of Gustavo Petro, Colombia's new leftist president. Petro wants to start an international discussion on ending the U.S.-backed war on drugs by decriminalizing and regulating cocaine. But given opposition to that approach from Washington and elsewhere, Soberón says, it's a "little bit utopian."

In the meantime, Devida is promoting premium coffee and cacao, which earn more than most alternatives to coca. But here, Soberón warns that demands in North America and Europe for traceability and certification for these fair-trade and organic products are financially impossible for Peruvian small farmers - pushing them back toward coca.

As for Odicio, and other threatened Indigenous leaders in the rainforest, that policy debate is the least of their worries. "My family could be killed," he says. "It's a constant anxiety. They could show up at any time. You just don't know."