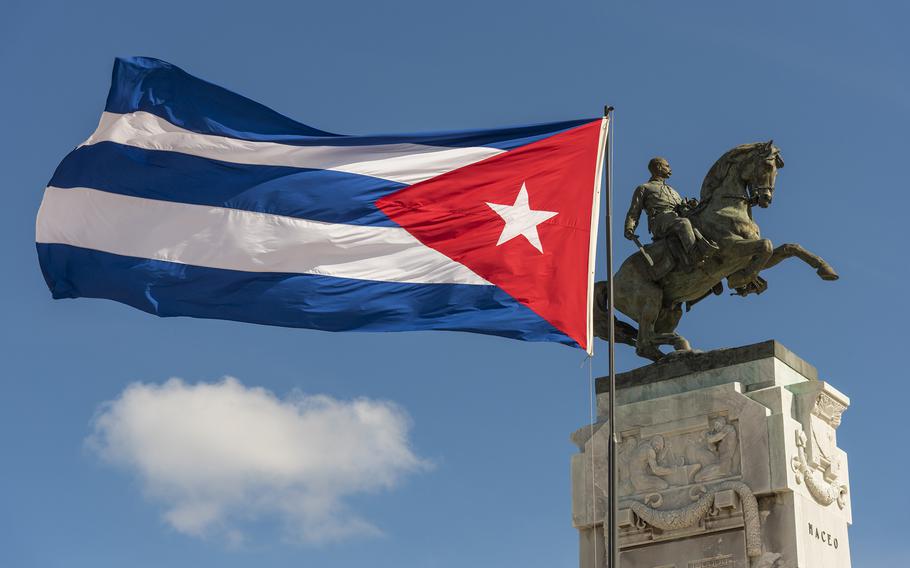 Cuba’s flag flies next to a monument to national hero Antonio Maceo in Havana, Cuba. (Dreamstime/TNS)

Members of a Puerto Rican anti-embargo group that spent a month in Cuba and were VIP guests at the recent official July 26 celebration say that FBI agents contacted them seeking information about their trip.

Milagros Rivera, the head of the Cuba Solidarity Committee in Puerto Rico, told Cuban state news agency Prensa Latina that members of the Solidarity Brigade "Juan Rius Rivera" were visited by FBI agents who wanted to interview them "informally" regarding their July trip to the island.

She said they asked about a minor who traveled with her mother as part of the brigade, "information that they did not obtain," she said.

The activist told Cuban state media that human rights lawyers advised the group not to talk to the agents. She called the FBI efforts an attempt to "criminalize solidarity work and visits to Cuba."

Rivera did not immediately reply to an email seeking comments. Calls to the FBI's office in Puerto Rico went unanswered.

Cuba leader Miguel Díaz-Canel condemned the "harassment" against the brigade on Twitter.

It is not clear why the activities of the brigade are under the FBI radar. The group, which took the name of a revolutionary leader from Puerto Rico who fought in Cuba's independence wars, has been traveling to Cuba for three decades.

According to Cuban state media, which widely covered the visit, the brigade, with more than a hundred participants, arrived in Havana on July 1 and traveled around the country. The tour included stops at a new Fidel Castro museum in Havana and a mausoleum dedicated to guerrilla leader Ernesto "Che" Guevara in Santa Clara.

The event at the Castro museum, in which the brigade celebrated its 31st anniversary, was attended by the Puerto Rican nationalist Oscar López Rivera, high-ranking officials in the Communist Party's Central Committee and three of the five Cuban spies who returned to Cuba in 2014, including Fernando González Llort, the current head the Institute For Friendship with the Peoples (ICAP).

The ICAP coordinates the activities of the solidarity brigades all over the world, which are used in propaganda efforts by the Cuban government. ICAP is also suspected of playing a role in Cuba's intelligence activities.

Rivera and about 60 members also participated in the July 26 main political event in Cienfuegos, an annual commemoration of the assault of a military barrack by Fidel Castro and his followers.

"The July 26 date reminds me of Fidel, who we understand is the eternal commander of humanity," she said in a video published by the Cuban Communist Party on social media.

According to Cuban media, the brigade brought a donation of medical supplies on its recent trip. Members had last traveled to the island in 2019.

Early this month, Florida Republican senator Marco Rubio wrote a letter to FBI head Christopher Wray, urging him to investigate a similar solidarity group based in the U.S., Bridges of Love.