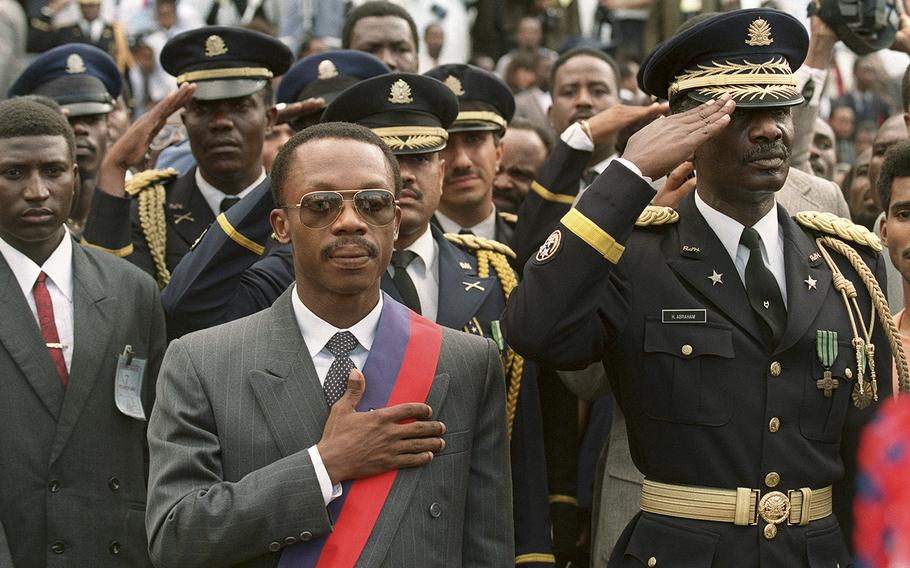 (Tribune News Service) — Herard Abraham, the respected former army commander-in-chief who played a major role in ushering in Haiti's first democratically elected president in 1990 only to be forced into retirement in a purge months later, has died, his family and Haiti's government confirmed. He was 82.

No official cause of death was given, but a relative said the retired general had a brain tumor and passed away Wednesday at his home in Fermathe in the hills above Port-au-Prince.

In a tweet confirming the death, interim Prime Minister Ariel Henry said he was "dismayed to salute the departure" of Abraham. who also briefly served as acting president when anti-government protests in March of 1990 forced his boss, another army commander, to flee.

Henry called Abraham "a moderate and exemplary Haitian soldier and statesman. A worthy son of the nation, the President General has always been loyal to his country, which he has served in difficult times. The government bows with respect to the remains of this great man."

Abraham, whose career began during the Duvalier family dictatorship and ended with the first democratically elected president, Jean-Bertrand Aristide, had a 30-year military career. He survived not just the brutal dictatorship and chaotic and violent period that followed the 1986 fall of the dictatorship, but the military coups, governments and civilian transitions that followed.

He was credited with placing the support of the Armed Forces of Haiti behind Haiti's democratic transition, working with the international community to secure the December 1990 presidential elections that brought Aristide, a widely popular priest from Haiti's slums, to power.

Seven months later, however, Aristide forced Abraham into retirement and replaced him with Gen. Raoul Cedras, the army commander who went on to lead the bloody September 1991 military coup that ousted Aristide from power and forced him into exile.

Abraham left Haiti for exile in Miami. In 2004, while living in obscurity in Miami Shores, he was plucked from retirement when Aristide was once more forced into exile during his second presidency and Haiti once again faced an uncertain future. He was among several candidates in the running to potentially lead Haiti as prime minister through a transition.

In the end, the job went to Boca Raton resident Gerard Latortue. A friend of Abraham's, Latortue was chosen by a Council of Sages whose seven members included current interim Prime Minister Henry. Latortue did not forget Abraham, an astute political survivor who had risen to the rank of lieutenant general during a 30-year army career. He made Abraham a member of his 13-member Cabinet, giving him the job of interior minister with responsibility for local authorities and national security.

At the time, Abraham's selection was seen as a sign of Latortue's interest in reinstalling the Armed Forces of Haiti, an idea that Abraham openly promoted after the force's dissolution in 1995 by Aristide with U.S. backing upon his return from exile.

With Haiti's capital increasingly being overtaken by violent gangs that arose under Aristide's term, Abraham, as interior minister, proposed re-establishing the Haitian army to help a United Nations multinational peacekeeping force disarm the population. After heading the interior ministry he was given the job of foreign affairs minister from January 2005 to June 2006.

It was a familiar role. Abraham had served as information minister and foreign minister in the first military government, headed by Lt. Gen. Henri Namphy, after dictator Jean-Claude "Baby Doc" Duvalier fled into exile in France on Feb. 6, 1986. During the government's installation, Abraham announced that democratic elections would be held in November 1987, and that the military government would hand power over to a democratically elected government on Feb. 7, 1988.

That didn't happen until Feb. 7, 1991, and there were several more governments during that period, including the government of military-president Lt. Gen. Prosper Avril, in which Abraham also served as foreign minister. Avril ruled from September 1988 until March 1990 when popular protests on March 10 sent him fleeing into exile.

Abraham, who was also major-general of the 8,300-member Haitian Armed Forces, became acting president of Haiti. He later won praise from foreign diplomats when he voluntarily turned over the presidency — unheard of in a country where the army has led coups and perpetrated human rights violations — to the first civilian government since the end of the 29-year Duvalier family dictatorship.

"He was a stately and serious man who took responsibility of his mission," Pascal-Trouillot told The Miami Herald. "He worked for the good of the country."

Abraham wasn't without critics, even as many considered him to be a decent man, especially compared to many of his army predecessors. In 1990, he was criticized for not arresting former Duvalier Interior Minister Roger Lafontant, the former head of the regime's dreaded secret police known as the Tonton Macoutes, when he returned from exile despite a warrant for his arrest. Months later, Lafontant was arrested by the government after a failed Jan. 7 coup attempt.

Later, Abraham came under fire for his suggestion that former soldiers could be integrated in the Haiti National Police, and later for staffing his ministry with former ranking military figures, some of whom had been accused of human rights abuses.

In later years Abraham returned to private life in Haiti, making few public statements. He did speak out to defend his tenure at the ministry of foreign affairs under Latortue when the country's Chamber of Deputies in 2006 levied charges of embezzlement in the diplomatic missions.

In 2020, Abraham was named by President Jovenel Moise to be part of a five-member advisory committee drafting a new constitution for Haiti.

Moise was assassinated less than a year later, on July 7, 2021, before his dream of a new constitution for Haiti could be realized.