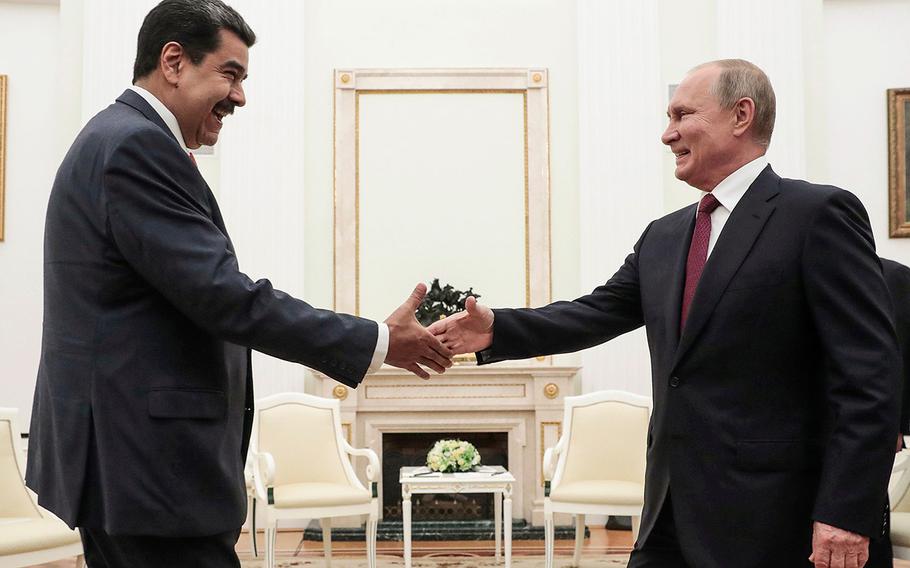 Russian President Vladimir Putin (right) is about to shake hands with Venezuelan President Nicolas Maduro during their meeting at the Kremlin in Moscow on Sept. 25, 2019. (Sergei Chirikov/AFP via Getty Images/TNS)

(Tribune News Service) — Snipers from Russia and other countries hostile to the United States are competing in war games being held this week in Venezuela in events described as Olympic games for soldiers that were organized not only to show that Moscow still has friends but also that some of them are in Latin America.

The international war games have been held yearly since 2015, following Russia's annexation of Crimea, and Venezuela has participated from its beginning, but this year's games are the first held in Latin America, and include participants from Cuba, Bolivia and Nicaragua.

Forces from Burma, Belarus, Abkhazia, Uzbekistan, China, India, Pakistan and Indonesia, among others, also participate in the competitions. These are nations that "daily condemn imperialist aggression against the peoples," Venezuelan Defense Minister Vladimir Padrino López declared as he inaugurated the games on Monday.

The games are held at a time when Russia is being harshly criticized for its military incursion into Ukraine, an invasion that triggered severe economic sanctions against Moscow by Europe and the United States and a chorus of condemnations around the world.

This year's games seek to remind the world that Russia still has friends, but observers believe that the fact that they are being held in Venezuela could have a longer-lasting effect.

"In a sense, this seeks to normalize (and pave the way for) a larger military presence in Latin America," said Joseph Humire, executive director of the Center for a Secure Free Society, a Washington-based think tank. These games could open the door "to larger military operations and games in the future" involving not only Russia, but also China and Iran.

The region already saw this a few years ago with the first flights of Iranian planes to Venezuela. The planes, whose contents remain a mystery, initially caused great alarm in Venezuela and among observers of the Nicolás Maduro regime, but then became so frequent that they ultimately went unnoticed, Humire said.

"It is already normal for Venezuelans and today there are flights from Iran that are constantly arriving, that are participating in activities that are worrisome and alarming but that people are not paying attention anymore," Humire said.

The games are held at the Terepaima Military Fort, located in the central-western state of Lara, where specialized sniper teams from participating countries compete for bragging rights.

Although the numbers of soldiers present in Venezuela have not been disclosed, experts estimate that they could add up to hundreds of troops, given that in previous war games countries participating neared 30.

The competitions — which in the past have tested detachments of tanks, artillery and amphibious operations — are scheduled to last until Aug. 27 and show the willingness of the Caracas regime to turn Venezuela into a platform for a series of anti-American activities, said Evan Ellis, professor of Latin American studies for the U.S. Army War College.

"Venezuela wanted to host these games, wanted to be one of the organizers and host this party and the host of other anti-American activities," Ellis said.

Venezuela's relationship with Russia is already extensive and the games seeks to expand it further, added retired Venezuelan National Guard colonel Isidro Pérez Villalobos. But the games also seek to promote Moscow's and other participating countries' arms sales in the region, although not necessarily to regular armed forces, he added.

The event "serves as a conclave for merchants of sophisticated weapons to transnational terrorist organizations that operate in Latin America with the support of the Venezuelan regime," said the Venezuelan military officer.

In a certain way, the games also highlight Maduro's diplomatic game with the United States, which on one hand shows his willingness to participate in talks with Washington to improve relations while seeking to strengthen his relations with Moscow.

And that the United States is willing to engage Maduro shows its shortsightedness when dealing with Venezuela and in not paying sufficient attention to Russia's, China's and Iran's activities in the region, Pérez Villalobos said.

"In the United States they downplay Russia's presence in Venezuela, but they are everywhere in the country," said Pérez Villalobos . "They are arms suppliers, they are oil and economic partners, they are political allies and now they sponsor military competitions."

By holding these games in Venezuela, he said, "Russia is telling the United States: 'I can also come to your backyard. You want to get into the Baltic countries, in Ukraine, and in the geo-historical spaces of Russia? Well, I also get into your spaces."