Rights leader warned Congress about Haiti gangs. But the problem has only gotten worse 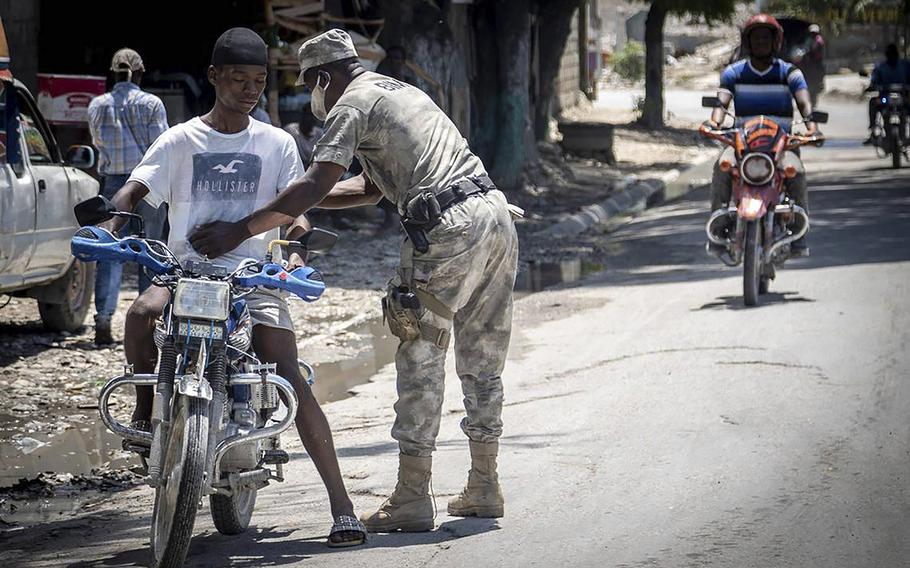 A Haitian Policeman frisks a motorcyclist at a check point on June 23, 2022, in Butte-Boyer 75, where a deadly gang war erupted in late April. Police launched a military style incursion to take back the key intersection. (Jose A. Iglesias/El Nuevo Herald/TNS)

(Tribune News Service) — When the number of gang-involved massacres in Haiti stood at five a few years ago, the head of a leading human rights group warned U.S. lawmakers about the Caribbean nation’s exploding crises of gang violence and firearms trafficking.

“From the capital to provincial cities, Haiti is full of armed gangs that enjoy the protection of the executive and legislative powers,” Esperance testified in 2019 before a House Foreign Affairs committee on the Western Hemisphere in Washington. “They regularly receive money and automatic firearms, and they never run out of ammunition.”

He accused then-Haitian President Jovenel Moïse of using armed gangs to repress political dissent in opposition strongholds like the La Saline neighborhood of Port-au-Prince, where government officials were implicated in a 2018 massacre involving at least 71 deaths.

“Armed gangs, with the protection of government authorities, have carried out five massacres over the course of President Jovenel Moise’s administration,“ he testified.

Although Esperance may have strained to gain the attention of Congress, Haiti observers say, his words were prophetic: In July, a new round of deadly gang clashes left 470 people dead, injured or missing over a nine-day period in Cité Soleil, the capital’s largest slum, according to the United Nations. According to witnesses, young men had their arms and legs chopped off, babies and the elderly were burned alive inside homes in the Brooklyn neighborhood and more than a dozen women were raped.

“This is a big problem and not easy to solve, but you would think they would be doing more to crack down on it,” a senior congressional staffer told the Miami Herald. “It’s affecting everything we are trying to do in these countries. Haiti is now a failed state where gangs with automatic weapons are in control.”

In the time since Esperance’s testimony before Congress — a period of extraordinary turmoil including the assassination of Moïse last July — gangs have grown even more virulent and potent, tightening their grip on the Haitian territory amid the political vacuum created by the president’s slaying.

Today, the number of documented armed attacks and massacres has tripled to at least 17 since 2018, Esperance said. The most recent two occurred between April and May in the La Plaine du Cul-de-Sac area just east of Port-au-Prince, and last month in Cité Soleil.

The war between rival gang alliances G-Pèp and the federated G-9 and Families and Allies in Cité Soleil involved several cases of collective and repeated rapes, perpetrated against women and girls, and a lot of violence, the National Human Rights Defense Network said in a new report it published Tuesday.

”More than 300 people were murdered. Most of the corpses were charred,” the human rights group said, adding that its assessment of the massacre remains ongoing and to date, it has been able to speak with the relatives of 248 murdered victims.

Among the victims of the gang warfare is a 30-year-old mother of three who was abducted by at least six armed bandits who took her into an abandoned area and raped her. As she tried to escape, she was hit by two bullets, one of which grazed her in the right rear and the other lodged in her right hip. She had to undergo surgery to remove the bullet from her hip.

“With each armed attack in disadvantaged neighborhoods, it is the most vulnerable people who are the first victims, that is to say, children, women and girls, the elderly, people with reduced mobility and people with sensory disabilities,” the report said.

Condemning what it deems the passivity of state authorities, the human rights group accused Haitian authorities of being “accomplices of the armed bandits” because it has turned “a blind eye to the massacres and armed attacks in disadvantaged neighborhoods as well as on the abuses committed there.”

“They have never done anything to curb these bloody events. The victims do not benefit, for their part, from any form of assistance. Worse, the executioners of the Haitian population are today very powerful with the political coalition currently in power,” the human rights group said, adding that the behaviors of the state authorities “only prove the degree of their disregard for the life of the Haitian population.”

Last month, at China’s urging, the United Nations Security Council agreed to prohibit the sale of small firearms, light weapons and ammunition to “non-state actors.” The resolution, which also extended the mandate of the small U.N. political office in Haiti, calls for travel bans, asset freezes and other sanctions against Haiti’s gang leaders and human rights abusers.

Last month, the U.S. House of Representatives voted to include a provision by Michigan Democrat Andy Levin in this year’s National Defense Authorization Act requiring the executive branch to provide a report on arms trafficking in Haiti.

Levin, who was soon ousted from Congress in his Democratic primary after the bill was sent to the Senate, proposed reporting on major routes by which illegal arms are trafficked into Haiti. He also called for reporting on Haitian seaports and airports that are being employed for the shipments and a description of the networks of Haitian government officials, customs officials, gangs and others who are illegally involved in arms trafficking.

Before the Cité Soleil massacre, there was the one in La Plaine du Cul-de-Sac.

According to the U.N. Integrated Office in Haiti, at least 94 Haitians were killed, more than 120 injured by gunfire and 12 others disappeared between April and May of this year when rival gang members, armed with assault rifles, machetes and gas cans launched an attack in the area.

Dozens of women and girls were also raped as part of what the U.N. described as “gross human rights violations,” and at least 16,000 people were forced to flee their homes.

The attack coincided with the transfer of one of Haiti’s most notorious gang leaders, Germine Joly, 29, from a Haitian prison to the U.S. on an international arrest warrant in connection to firearms trafficking charges against him and three other Haitian Americans from South Florida. They’re accused of illegally exporting dozens of rifles, shotguns and pistols for the 400 Mawozo gang. Joly, who is better known as “Yonyon,” was also charged with conspiracy to commit hostage taking for his role in the armed kidnapping of 16 U.S. citizens in Haiti last year. The victims, including five children and a Canadian national, were Christian missionaries and were held captive by the 400 Mawozo gang. The last remaining dozen hostages were released after 61 days.

Joly’s 400 Mawozo, which was involved in the April attack, is known for its mass abductions, grabbing people by the bus and carloads and extorting local businesses.

A look at some of the most notorious firearms-trafficking cases in the past year:

— The indictment of Joly, who directed straw buyers through a series of WhatsApp phone and video calls from his Port-au-Prince cell, where he also negotiated ransom payments.

— A second weapons-trafficking case focuses on another leader of the 400 Mawozo gang, Jean Pelice, who was picked up by U.S. authorities in the neighboring Dominican Republic.

— In June, another Haitian man was charged with trying to smuggle dozens of semiautomatic rifles, handguns and ammunition from Miami to the Caribbean country that were destined for a ring of drug traffickers, according to U.S. authorities. The cache was hidden in a vehicle and seized at the Port of Miami in December 2020, authorities said.

Hendel Laurent, a U.S. citizen who resided in South Florida, was indicted on charges of violating export and smuggling laws. He’s accused of trying to export 21 weapons and magazines to Haiti without a Commerce Department license. Among the makes: Smith & Wesson M&P 15, Glock 19 Gen4 and Ruger 9E-SC.

In July, federal prosecutors in Denver charged Haitian national Peniel Olibris with sending two semi-automatic firearms from the U.S. to Haiti in 2019.

The senior staffer in Congress told the Herald he believes that America’s gun culture is fueling much of the flow, and also hurting U.S. efforts to help its neighbors.

“My sense of this administration and its treatment of most of the hemisphere is that it’s not a high priority,” he said, adding that Haiti in particular is “the extreme example” of the Biden administration’s “detachment, and hope that it doesn’t become a bigger problem.”

The staffer, who asked for anonymity so he could speak frankly, said authorities are seeing trafficking in weapons not just to Haiti but to countries throughout Latin America and the Caribbean, and it appears to be “largely uncontrolled.”

“How can someone ship thousands of rounds of ammunition and no one knows?” he said. “It illustrates how lax the controls are or the people involved in the business on this end are as corrupt as the people on the other end.”

The staffer said the controls are so lax that officials cannot have confidence that guns and ammunition being shipped from the U.S., even legitimately, won’t end up in the hands of drug traffickers and cartel bosses in countries like Mexico and Central America.

Last year, Sen. Patrick Leahy, a Vermont Democrat, tried to include a provision in a Senate appropriations bill on end-use monitoring of firearms and ammunition exports to Central America and Mexico. But the measure received push-back from Republicans and even the State Department, which argued that it already had measures in place. The bill never made it out of committee.

“Anything that is perceived as limiting the ability of people to sell guns is seen by some as the camel’s nose under the tent, and by others as bureaucratically burdensome,” the staffer said. “But it’s obvious that the current situation is inadequate for purposes of monitoring the end use of lethal weapons.”

Some members of Congress, including Leahy, would like to see the State Department instead of Commerce in charge of regulating the exports and licensing of firearms. Leahy wrote the law that prohibits U.S. assistance to Haiti’s security forces or to that of any foreign government believed to have committed gross violations of human rights.

“There is no reason to think that Haiti is any different from Mexico or Central America where U.S. weapons are pouring in,” the staffer said. “When you are trying to get a handle on it the State Department says it’s under the control of the Commerce Department.”