As wave of violence plagues Mexico, US issues travel alert 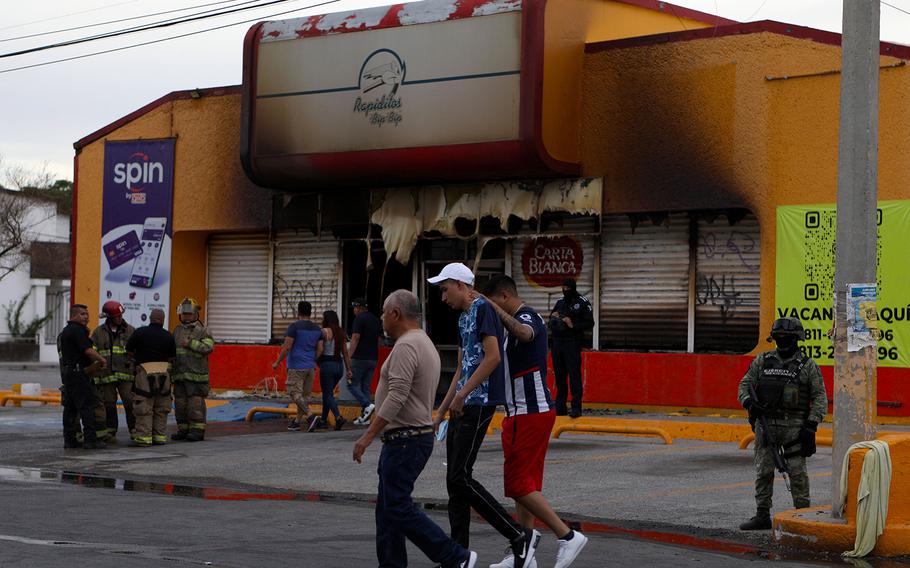 Members of the Mexican Army, firefighters and forensic experts work at the site where unknown persons burnt down shops in Ciudad Juarez, state of Chihuahua, Mexico, on Aug. 11, 2022. (Herika Martinez/AFP via Getty Images/TNS)

On Friday, the city of some 1.5 million people stood eerily quiet, as schools switched to online teaching. Some gas stations closed. Others stayed open but with reduced hours. Some convenience stores and supermarkets shut down, a day after several were sprayed with bullets or Molotov cocktails, killing employees, and customers.

Behind the violence is a bloody dispute among warring cartels that's paralyzed this city and several others across Mexico.

Thousands of workers stayed away from maquiladoras, threatening the supply chain. The ramifications were felt across the border in El Paso, as the private school Lydia Patterson closed, until further notice. The school is popular with students who commute daily from Juarez.

"Black Thursday" included the deaths of four employees at a popular radio station. They were gunned at as they were taking part in a promotional event outside a pizzeria. Among the dead, a popular radio host, Allan Gonzalez.

The National Chamber of the Radio and Television condemned the attack against the media employees and called on the government to take action.

"I deeply regret the loss of human lives in this heinous event against Ciudad Juárez," it read. "I condemn the violent events that occurred this afternoon. I reiterate my commitment to work to the best of my strength and abilities, to guarantee the well-being of Juarenses."

Campos said she ordered "operatives to be deployed immediately in the city. The entire state police force, together with federal and municipal forces, are focused on restoring order and peace. Juarenses are not alone."

The bloodshed is part of a larger wave of violence across Mexico, including some areas of the states of Sinaloa Jalisco, and Guanajuato, regions that have family, economic and cultural ties to North Texas.

These are areas with long simmering cartel territorial disputes. On Wednesday, the U.S. Embassy updated its travel advisory for Mexico, issuing alerts to Guanajuato, a popular tourist destination, citing "arson of buildings and vehicles" and asked that "U.S. citizens are reminded to reconsider travel to Guanajuato state due to violence."

In Juarez, Mayor Cruz Perez Cuellar took to social media and in a Facebook post condemned the violence, calling the attacks "cowardly."

"Yes," he said, in his post at midnight Friday. "Juarenses are in mourning today, but there's also hundreds of elements working in Juárez and for Juárez on this terrible night."

He vowed the city will push back and will coordinate with all levels of government.

"We have not lowered our guard," he said. "I trust each of our police officers, our (police chief) and his entire team that has not left the streets and is on the front line."