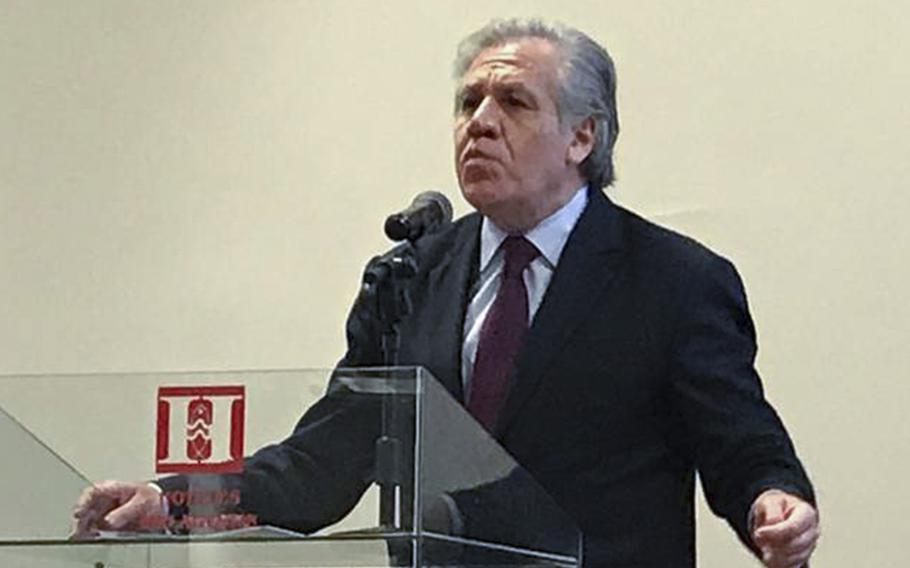 (Tribune News Service) — The Organization of American States, based in Washington, has a reputation for toeing the U.S. policy line when it comes to countries in the hemisphere, especially where Haiti is concerned.

So this week, when its secretary general, Luis Almagro, slammed the international community in a four-page statement — released both on Twitter under his name and on the OAS’ website — on how it has failed Haiti with its “20 years of erratic political strategy” and failure to facilitate “the construction of a single institution with the capacity to address the problems facing Haitians,” many people both in and out of the country were astonished.

Some members, like Antigua and Barbuda’s ambassador to the U.S. and OAS, Sir Ronald Sanders, welcomed the “courageous and correct” statement from Almagro at a time when Haiti is being overtaken by gangs, elections seem increasingly elusive and the nation is suffering from shortages of food and fuel.

Others see his statement as a sign that the OAS chief, after years of trying quiet diplomacy, is fed up with the deafening silence from the international community as Haiti slips deeper into anarchy.

In an interview on Magik 9 radio station, Frantz Duval, a leading editorial writer in the Haitian daily Le Nouvelliste, accused Almagro and the OAS — which has been involved in every controversial election in the past dozen years — of being complicit in Haiti’s current crisis. He reminded the audience that this is the same organization that dismissed its special representative, Ricardo Seitenfus, in 2011 after he accused the international community of meddling in Haiti’s post-quake 2010 presidential elections and threatened to oust then-President René Préval when he refused to remove his preferred candidate, Jude Célestin, from the race.

This is the same Almagro, Duval wrote in Le Nouvelliste, who in 2020 traveled to Haiti in search of support for his re-election bid as head of the OAS and during the visit endorsed President Jovenel Moïse’s controversial plan to adopt a new Haitian constitution despite accusations the president was constantly trampling on the current charter. And the same Almagro, he said, who backed the U.S. call for elections even though many Haitian leaders said they were impossible amid warring gangs, deepening political instability and ongoing kidnappings.

The Miami Herald interviewed the secretary general about his statement. Among other things, Almagro accused the international community of withdrawing from Haiti and criticized the U.S. and others for pushing for the end of the United Nations Stabilization Mission in Haiti, known as MINUSTAH, after 15 years. Almagro said that decision— it was also supported and pushed for by the Moïse government— “simply paved the way for a situation like the one we have today.”

In the interview, the secretary general said the return of U.N. peacekeepers should be a first step, and he argues that a new Haitian constitution is even “more imperative” today. As for his former support for Moïse, who was assassinated inside his private residence a year ago on July 7, Almagro said it was no different than the OAS’ support for all rulers facing critical situations.

“It was not Moïse’s government that generated a turning point in the dynamics of anarchy, weakening of institutions, weakening of civil society and criminal gangs, but his murder,” he said.

His new public position, he said, is a recognition of the economic, social and political dynamics in Haiti, where inflation is nearing near 30% annually, fears of food riots are growing and more than 470 people were killed, injured or went missing amid gang warfare last month during a nine-day span.

“The withdrawal of the international community brings us to a point of no return, that leads me to draw attention to the facts with a high sense of urgency. The statement is particularly clear in describing this point of no return where we stand today,” Almagro said. “History does not unfold or reverse itself in a linear manner. The accumulation of failures has led to the total weakening of State institutions and civil society.”

Below are his additional responses to the Herald’s questions on what prompted his criticism of the international community, whether he is pointing fingers at his own organization — which he has headed for nearly eight of the 20 years he mentioned — and what the Haitian people can now expect of him and the hemispheric group. The responses have been edited for length

Question: This statement on Haiti is something we have not seen from you before despite your reputation for being a maverick. What is responsible for this “Haiti” conversion?

What conversion? There hasn’t been any conversion, just a sense of responsibility to deal with a continuous Haitian crisis, with practically no money at all, doing our best to stabilize institutions during the worst of times. Like we did with special missions at the end of the mandate of President [Michel] Martelly or during the transitional government. Our missions reflect the consistent disposition for dialogue and have been very relevant in crucial moments like those I mentioned.

It is not a conversion, but it is a call for action. Further actions based on the United Nations system, but now we feel that we must take the initiative to demand solutions because of the situation of the country that is getting into a deeper and deeper social, political, economic and security crisis. And we see that those who have a responsibility to stabilize the country financially and economically, and those that have responsibility to provide security, are not doing enough to achieve that, whether they are external or internal actors.

Q: Are you in your statement taking issue with the fact that the recent renewal of the United Nation’s Integrated Office in Haiti extended but did not expand the mandate?

It is not for me to evaluate other international organizations, but based on my previous response and what we expressed from the General Secretariat in the statement, it is clear that we aspire to a very ambitious commitment from the international community in Haiti.

We must be committed to address the specific issues that are deepening the Haitian crisis. We cannot seek to avoid or sidestep the problems; we must face them head on and confront them no matter how costly it is, because it is becoming more costly to let them go, to let them continue and worsen. The Organization has tried and keeps trying to engage all parties in a political dialogue that can start to resolve the crisis. This has been our political commitment related to this matter, but now we think that we should go further, that we should assume new responsibilities. And we are asking those responsible for the financial support to trust us, to cooperate with us in achieving that.

Q: What should the new mandate of the United Nations look like? Are you supporting a return of peacekeepers as the Dominican Republic has publicly asked for?

It is one of the lines of action to consider very seriously. It is much harder now than when MINUSTAH left, but that only shows that it is becoming more and more necessary day by day. The conditions today are much more violent than they were, and the work will be much harder and with many more complications. We are open to other proposals to provide security for Haiti, but I have to say that it is very difficult to arrive now fast enough with the proper logistics if it is not done through well-established procedures and mechanisms that already exist with the peacekeeping missions.

Q: At one point you supported the idea of a constitution change in Haiti, despite scholars raising criticisms about Moïse’s plans, and you kept pressing for elections when they were impossible. So what has changed now?

In Haiti, the state was weakened to such a point where anarchy reigns and criminal gangs appear as a “new order” in the face of that anarchy. In the first half of 2022, 557 people died. This brings the rate of deaths from violence to 10 people per 100,000 inhabitants. To give you an idea of that figure, Norway’s is 0.5 people per 100,000 inhabitants.

Q: What do you say to those who say you and the OAS also shoulder blame in Haiti’s crisis?

Our “support” for President Jovenel Moïse was about supporting a democratically elected president to democratically complete his mandate, a president whose life was at great risk. And when we were asking for a reform of the Constitution, it was specifically to say that presidents shouldn’t rule by decree, something that seemed inevitable in Haiti because no government was ever able to implement the midterm parliamentarian elections. We should always remember that President Jovenel Moïse ended as a victim of the virus of violence that was about to gain control of Haiti.

Violence today is a tool in the hands of the President’s victimizers and others. So, what do I say to those who say I shoulder blame in Haiti’s malaise? I say that is nonsense, because of the reasons explained above. But also because of something else I have mentioned, the existence of critics who don’t want a real solution for Haiti; those who chased away MINUSTAH in order to let the gangs rule the country or those who are profiting personally from the money that belongs to the people.

The reality is that we at the OAS don’t have the financial resources to bring people to Haiti, but just to do some very specific projects. We were not pumping hundreds of millions of dollars into the Haitian political system. We were never in charge of development or security in Haiti — those who say otherwise are simply uninformed, or misinformed.

Q: What responsibility does the OAS bear in the weakening of institutions in Haiti and in this crisis?

But, as I pointed out in the previous answer, we have no problem exposing ourselves to criticism from others or self-criticism, but that is not the central reason for our statement. The reason is to assume the responsibility as an international community not to leave the Haitian people alone, and to reformulate the type of support and work we can do to address the perverse dynamics to which I referred in the previous responses.

Q: Haiti continues to be governed by an unelected prime minister, has gangs raging all over the place, and yet some member states of the OAS seem unwilling to do much beyond the statement. Why the reluctance?

I repeat, my role is to sensitize, sensitize, and sensitize the international community. The statement is a call to action for everybody, so I expect everybody to respond to this call.

Q: What are you hearing from member states about the Haiti situation?

No one in this region wants to see a Haiti overcome with criminal violence, a country with weak institutions, a weak civil society, a polarized country. ... This is a great concern throughout the region.

Q: What will you do now, what can you do now within the OAS to make changes that would help Haiti?

We will keep working on the solutions proposed in our statement.