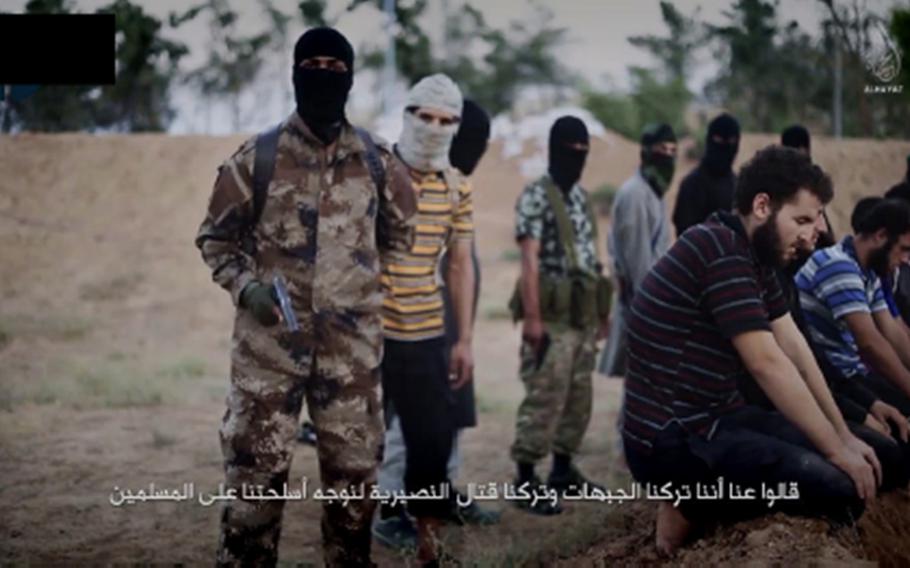 A still from an Islamic State propaganda video that Mohammed Khalifa narrated and appears in. Khalifa, front, is shown in the black mask and camouflage uniform, just before he shoots a kneeling Syrian soldier, left, execution-style, in the back of the head (U.S. Attorney’s Office for the Eastern District of Virginia.)

A Canadian man who was radicalized online and uprooted his life to join the Islamic State in Syria, rising to a top position in the terrorist group’s English-language propaganda arm, was sentenced Friday to life in prison.

Mohammed Khalifa, 39, was the English-language narrator in approximately 15 Islamic State propaganda videos, including some of its most influential and violent fare, prosecutors said.

But he also had a starring role.

Khalifa admitted that he appears in the final scenes of two documentary-length Islamic State videos - “Flames of War: Fighting Has Just Begun” and “Flames of War II: Until the Final Hour” - executing Syrian soldiers who had been forced to dig their own graves.

Khalifa pleaded guilty in December to conspiring to provide material support to terrorism resulting in death. Prosecutors asked for the maximum penalty of life in prison. Khalifa’s attorneys had requested a sentence of 20 years, noting that he had killed two Syrian soldiers but no Americans and that he had a wife and three children. The text of the statute under which Khalifa was charged does not require that victims who died be American.

U.S. District Judge T.S. Ellis described Khalifa as “the Pied Piper who played the tune,” enabling the Islamic State to reach English speakers in the United States and Europe with violent propaganda.

Federal prosecutors said it was effective. The Islamic State recruited 40,000 to 60,000 foreign fighters to Syria in the years it was waging war for control of parts of that country, they said, and Khalifa was an “instrumental” figure producing English-language content for videos, audio statements and an online magazine.

Ellis said Khalifa’s sentence “has to stand as a warning, as a beacon, to others.”

“Don’t become the recruiting tool for ISIS or any other terrorist organization,” the judge said.

Khalifa was born in Saudi Arabia, lived in Canada from a young age, earned a college degree in computer systems technology in Toronto, and then started watching online videos during the Arab Spring that eventually led him to Syria, particularly the lectures of the al-Qaeda organizer Anwar al-Awlaki, Khalifa stated in plea documents.

In a letter to the judge in January, Khalifa wrote that he had left behind a “comfortable home,” a “promising career” and marriage prospects in Canada because he was disquieted by the attacks on Syria’s Muslim population by the country’s president, Bashar Assad.

Prosecutors in the Eastern District of Virginia argued that Khalifa was aware of the Islamic State’s activities torturing, ransoming and executing humanitarian aid workers and journalists while he served in the militant group’s propaganda bureau.

Khalifa admitted he joined the Islamic State in 2013 and was captured in 2019 after a firefight with the Syrian Democratic Forces. He swore a fighting oath twice to Islamic State leader Abu Bakr al-Baghdadi. He sought and received a “fatwa,” or religious dispensation, to battle the U.S-backedSDF in Abu Badran, Syria, after Islamic State leaders had issued an order to flee.

In online communications, Khalifa referred to journalists and humanitarian workers being targeted by the Islamic State as “disbelievers” with whom the militant group “had no covenant.” In a broadcast, Khalifa called Omar Mateen, the shooter behind the 2019 Pulse nightclub massacre in Orlando,Fla., “our brother” and noted that it was the deadliest terrorist attack in the United States since 9/11. Khalifa referred to the victims at the gay nightclub as “filthy crusaders” and “sodomites,” prosecutors said.

“The Islamic State of Iraq and al-Sham, or ISIS, employed media and propaganda masterfully as part of its campaign of terror during the 2013-2018 time period,” federal prosecutors said in a sentencing brief. Khalifa “served as one of the Islamic State’s most prolific propagandists during the terrorist organization’s surge” and “personally engaged in extreme acts of violence to further the goals of ISIS.”

Edward Ungvarsky, an attorney for Khalifa, had argued that a life sentence would be “grossly excessive.” He declined to comment after Ellis’s ruling.

“Not only did he express regret over their conduct, he affirmatively created a ‘counter narrative’ set of videos in the hopes he could persuade others to turn away from ISIS in the future and not repeat the mistakes that he made,” Ungvarsky and Cary Citronberg, another attorney for Khalifa, wrote in a sentencing brief. They also had argued that Khalifa should get prison-time credit for the rough treatment he received while held captive by the SDF.

Khalifa was captured in January 2019 and turned over to U.S. custody at the end of September 2019.

In a news release after the sentencing, prosecutors said the “Flames of War” videos in which Khalifa is both the voice-over narrator and an executioner in the footage “glamorized portrayals of ISIS and its fighters as well as scenes of violence.”

In a court filing, prosecutors said Khalifa did not go down without a fight.

“When he had the opportunity to surrender to the Syrian Democratic Forces in Syria in 2019, the defendant threw multiple grenades and fired his AK-47 at Syrian soldiers to continue his murderous campaign on behalf of ISIS,” prosecutors said.

In Abu Badran, Khalifa, “alone and armed with three grenades and an AK-47, threw a grenade on the roof of a house where SDF soldiers were standing,” according to prosecutors.

He surrendered after his rifle jammed, prosecutors said.