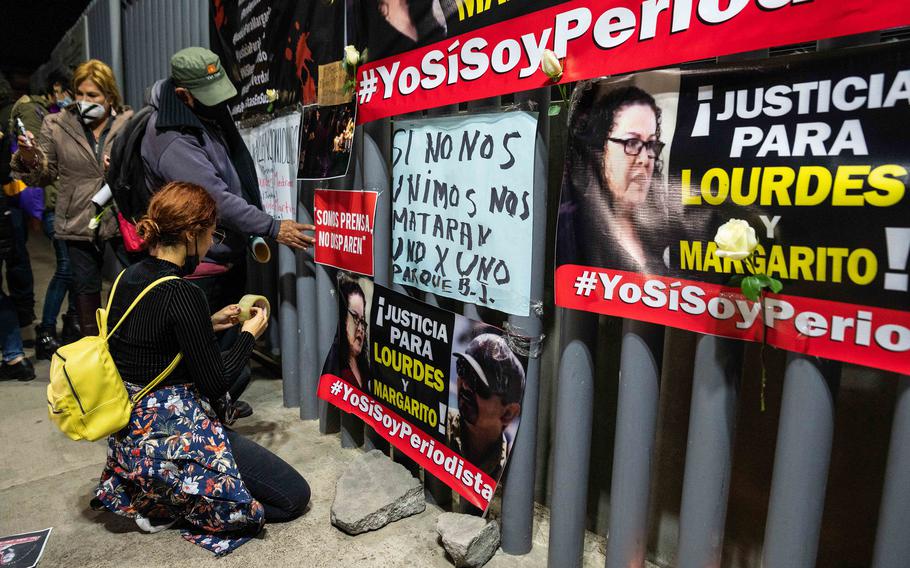 Members of the press put up signs on Jan. 26, 2022, in Tijuana, Baja California, Mexico, in front of the offices of the nation’s general prosecutor as part of a nationwide protest over the recent killings of reporter Lourdes Maldonado and photographer Margarito Martínez Esquivel. (Raquel Natalicchio/Zuma Press/TNS)

TIJUANA, Mexico (Tribune News Service) — Journalists, academics and law enforcement officials in Mexico are not convinced that the Arellano-Félix cartel was behind the January slayings of two prominent Tijuana journalists, as the government claims.

Mexico’s undersecretary of security, Ricardo Mejía Berdeja, on April 27 said the same criminal cell, composed of remnants of the Arellano-Félix Cartel (CAF), is responsible for the murders of Margarito Martínez Esquivel and Lourdes Maldonado López.

Martínez, a freelance photographer, was shot and killed on Jan. 17 outside his residence in Tijuana, in the northern Mexican border state of Baja California. Days later, Maldonado, a veteran broadcast journalist, was shot dead in her car on Jan. 23 in the Santa Fe neighborhood of the same border city.

“There is a link between the homicide of Lourdes Maldonado and that of Margarito Martínez with the same criminal group. It is a remnant of the Arellano-Félix group, led by a man nicknamed ‘Cabo 16,’ who was also arrested in both incidents,” said Mejía, during an April 28 presentation called “Cero Impunidad” (Zero Impunity) listing the arrests in both cases.

But doubts remain about which powerful organization or person, if any, may have been behind the killings.

“Tijuana’s got a pretty long history of grabbing someone who may have had the gun in their hand, but not touching the person who was actually responsible,” said Michael Lettieri, a San Diego-based researcher and the Senior Fellow in Human Rights at the Center for U.S.-Mexican Studies based at UC San Diego’s School of Global Policy and Strategy.

The #YoSíSoyPeriodista (Yes, I Am a Journalist) collective, which has pressed for accountability and held protests about the deaths, noted that there was no known evidence for the government’s claim that Maldonado was killed because she “denounced drug dealers” operating in the neighborhood where she lived.

Maldonado’s neighborhood is controlled, some law enforcement officials noted, by the Sinaloa cartel, not the CAF.

The collective of journalists alleged the claim of CAF complicity was made to divert suspicion away from Jaime Bonilla Valdez, a prominent local business leader and former Baja California governor who had been involved in a nine-year legal dispute with Maldonado stemming from her being fired by a company he owned.

In 2019, during a live broadcast news conference, Lourdes Maldonado told Mexican President Andrés Manuel López Obrador — Bonilla’s close friend — that she feared for her life, citing Bonilla by name. Bonilla has denied having any involvement in any threats to Maldonado’s safety or her murder.

“Unless there’s full transparency, and unless there’s a detailed clear chain of evidence that shows the conspiracy and the plot to kill Maldonado, there will always be a cloud of doubt around the investigation,” said David Shirk, a professor at the University of San Diego who follows organized crime in Mexico.

David Contreras, a retired detective sergeant who served 27 years with the San Diego Police Department and worked as a liaison on cross-border investigations, said the suspects arrested in the killings were operating on such a low level that they could be working for any cartel — or themselves.

“They were at one time part of the Sinaloa cartel. And they jumped over to the CAF,” said Contreras, who has also worked closely with law enforcement in Mexico as a private investigator.

Contreras said lower-level criminal cells aren’t as beholden to major transnational drug trafficking organizations as they once were. What was a simple all-out war between the Sinaloa cartel and the Arellano’s for control of the “Tijuana plaza” — the coveted territory to traffic narcotics into the United States — has now dissolved into a chaotic patchwork of low-level thugs with frequently shifting alliances.

“It used to be if you worked for one cartel and you went to work for another cartel, you were going to get killed,” he said. “But now, they’re jumping between the organizations. They call them chapulines (grasshoppers) because they’re basically jumping from one cartel to another.”

Once the most powerful organization in Mexico, leaders of the Arellano-Félix drug cartel lived out in the open in the 1990s, partying it up at local nightclubs, while instilling a deathly fear that prevented regular citizens from even mentioning their names in public.

The brothers and sisters of the Arellano family were nieces and nephews of Miguel Ángel Félix Gallardo, who ran the Guadalajara Cartel, and they inherited most of the drug trafficking routes into the United States. For decades, they seemed more powerful than the authorities who tried to capture them.

“Dead or alive, at large or behind bars, the words ‘Arellano Felix’ mean danger,” wrote San Diego-Union Tribune reporter Sandra Dibble in 2002. That’s when the group began to lose dominance, after the arrest of kingpin Benjamín Arellano Félix, described as the organization’s CEO, and the death of Ramón, the group’s ruthless enforcer, who was killed in a shootout in Mazatlan that same year.

It’s possible other criminal groups may be trying to leverage the deaths to turn up attention on their rivals, by giving authorities a reason to pursue their enemies.

“There might be a treaty between the military and Sinaloa, so they basically blamed it on CAF,” said Contreras.

Though the CAF isn’t nearly as powerful as it once was, the organization has been involved in killing journalists in the past. In 2004, a top CAF assassin was arrested after a shootout with Tijuana police on suspicion of killing Francisco Ortiz Franco, an editor at the weekly newspaper Zeta.

Contreras recounted helping to foil a 2013 attempt to assassinate Maldonado by Melvin Gutiérrez Quiroz, a Logan Heights hitman and member of the CAF.

“We had to go tell her, you know, ‘They’re going to kill you,’” said Contreras. “’They’ve been watching your house.’”

Mexican federal authorities said that it is a criminal known as “El Cabo 16,” whose real name is Christian Adán Velázquez, who linked the slayings of Maldonado and Martínez.

But as Zeta pointed out in a story published this month: “’El Cabo 16’ is not the head of any criminal group in Tijuana. He did hire, for 40 thousand pesos (about $2,000), the assassins of Margarito Martínez, but he has always been identified as a member of David López’s criminal cell ‘El Cabo 20.’”

No evidence has been made public that Maldonado ever did anything that would have warranted the attention of Cabo 16, Cabo 20 or the Arellano-Felix cartel.

“The thing that makes it really hard to perceive why she would be targeted by criminal organizations is that she wasn’t, at the time, doing extensive or in-depth investigative journalism looking at drug trafficking organizations, and their operations,” said Shirk. “Drug cartels kill journalists when journalists are in some way interfering with or threatening their organization and there’s no obvious motive we can see as to why Maldonado would have been a target with this organization at this time.”

A lack of transparency — and in Maldonado’s case, a trial that has been closed to the press and public — has fueled skepticism that the true authors of the crime will be held accountable. Updates on the murder case have not been available because prosecutors have insisted the hearings be held behind closed doors, citing a risk to a witness’ life.

The Zeta article asks: “Who is the President of the Republic protecting by spreading false information ... about the cases of the murders of Margarito Martínez and Lourdes Maldonado?”