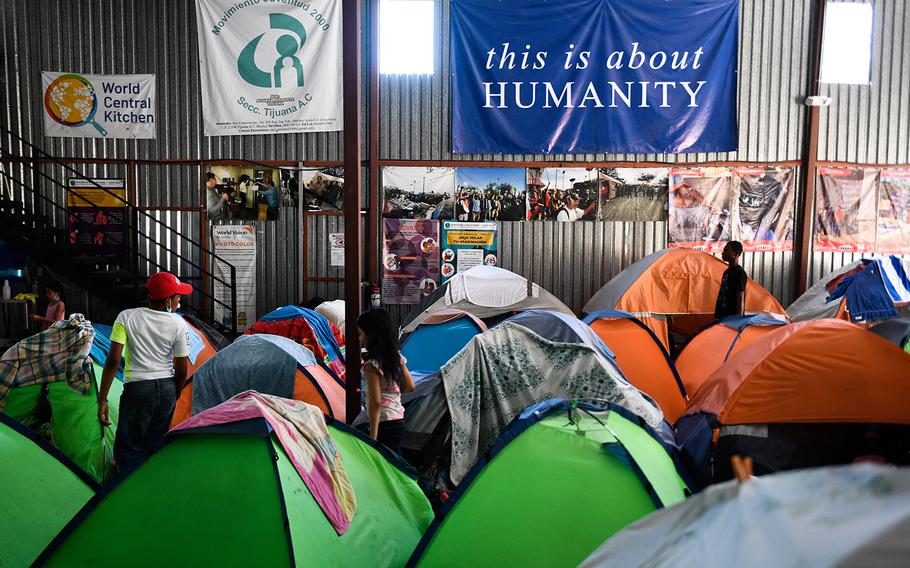 Families with children live in tents the Movimiento Juventud 2000 shelter with refugee migrants from Central and South American countries including Honduras and Haiti seeking asylum in the United States, as Title 42 and Remain In Mexico border restrictions continue, in Tijuana, Baja California state, Mexico on April 9, 2022. (Patrick T. Fallon/AFP via Getty Images/TNS)

(Tribune News Service) — President Joe Biden faces political peril as a showdown at the Supreme Court on immigration coincides with widespread criticism of his plan to end pandemic-related border controls.

Justices on Tuesday will consider whether Biden can end former President Donald Trump’s “remain in Mexico” policy, which has forced tens of thousands of asylum-seekers to stay south of the border while their applications are processed. A federal trial judge ordered the Biden administration to restart the program.

A ruling against the administration would further complicate Biden’s handling of immigration — an issue on which voters already give him low marks, polls show. Republicans are preparing to highlight the migrant surge at the southern border in the November elections, while a growing number of Democratic lawmakers are distancing themselves from the administration’s plan to scrap the separate, pandemic-driven Title 42 border controls, fearing the influx will only worsen.

There are no easy answers for the president. His Democratic base has vented frustration at the slow progress of rolling back his predecessor’s policies. At the same time, near-record border apprehensions have fueled Republican accusations that Biden’s desire for more welcoming policies are to blame — something that in turn has fired up GOP voters.

Border agents had more than 221,000 encounters with migrants last month at the southwest border, the highest numbers in at least two decades.

Tuesday’s remain-in-Mexico arguments may give critics fresh ammunition. The administration’s courtroom opponents, Texas and Missouri, say termination of the Migrant Protection Protocols program would mean the “en masse release” of undocumented immigrants into the country.

Immigration advocates say that characterization is misleading, pointing to studies finding the vast majority of asylum seekers show up for their hearings. They say the policy forces people to live in dangerous and squalid conditions in Mexico — and makes it more difficult for migrants to secure legal assistance.

“It has effectively ended asylum access for thousands and thousands of people since it went into effect,” said Ahilan Arulanantham, a professor and co-director of UCLA School of Law’s Center for Immigration Law and Policy, which filed a brief backing the administration.

Biden’s Department of Homeland Security rescinded the program last year, but U.S. District Judge Matthew Kacsmaryk in Texas ordered it reinstated, saying the administration was violating federal immigration law and its explanation for the change was inadequate under the law that governs administrative agencies. A federal appeals court upheld that order.

The conservative-dominated Supreme Court hinted at its leanings in August, rejecting Biden’s request to block Kacsmaryk’s ruling while the litigation went forward.

The dispute turns on the intersection of three provisions in federal immigration law. One says asylum applicants who aren’t clearly admissible “shall be detained,” a second says DHS can let those people stay in the U.S. on a “case-by-case basis,” and a third lets an administration return migrants to the country from which they arrived.

Texas and Missouri say that DHS lacks the capacity to detain everyone, so it must invoke the provision that lets people be returned to Mexico.

“DHS must faithfully comply with Congress’s mandatory-detention obligations — which means it cannot refuse to use a lawful tool to carry out that obligation merely because it prefers not to do so,” the states argued in court papers.

U.S. Solicitor General Elizabeth Prelogar, who represents the Biden administration, said not even the Trump team adopted that interpretation. She said the court should defer to DHS’s conclusion that the program poses unacceptable risks to migrants and undercuts diplomatic efforts to address immigration issues.

The order to restart the program “dramatically intrudes on the executive’s constitutional and statutory authority to manage the border and conduct the nation’s foreign policy,” she argued.

The Biden administration is also under pressure to delay or scrap the planned May 23 end of the Trump-era Title 42 border controls, which allowed agents to quickly expel migrants during the coronavirus pandemic. U.S. officials and lawmakers in both parties say the result could be yet another surge of migrants.

The White House has said that Title 42 is a public-health provision and that any decisions are made by the Centers for Disease Control and Prevention. Aides said preparations are being made to handle the expected influx of migrants after the order is lifted.

But the administration’s position is unpopular. Among registered voters nationwide, 56% said they disapproved of the decision to lift Title 42, according to a Morning Consult/Politico poll released this month, making it Biden’s most unpopular policy move to date in the survey.

Some immigrant-rights advocates blame the White House and top Democrats. They say party leaders have been too cautious in defending efforts to create a more welcoming immigration system — letting Republicans fill the void with statements that fuel anti-immigrant sentiments.

And some of Biden’s moderate allies in the Senate, including Homeland Security and Governmental Affairs Committee Chairman Gary Peters and Chris Coons of Delaware, are joining the criticism. The breadth of opposition shows how seriously Democrats believe a rush at the border could politically damage the party.

“Right now this administration does not have a plan,” Democratic Senator Mark Kelly of Arizona, who himself will face the voters in November, told reporters earlier this month during a tour of the border. “To be honest, it’s going to be a crisis on top of a crisis.”