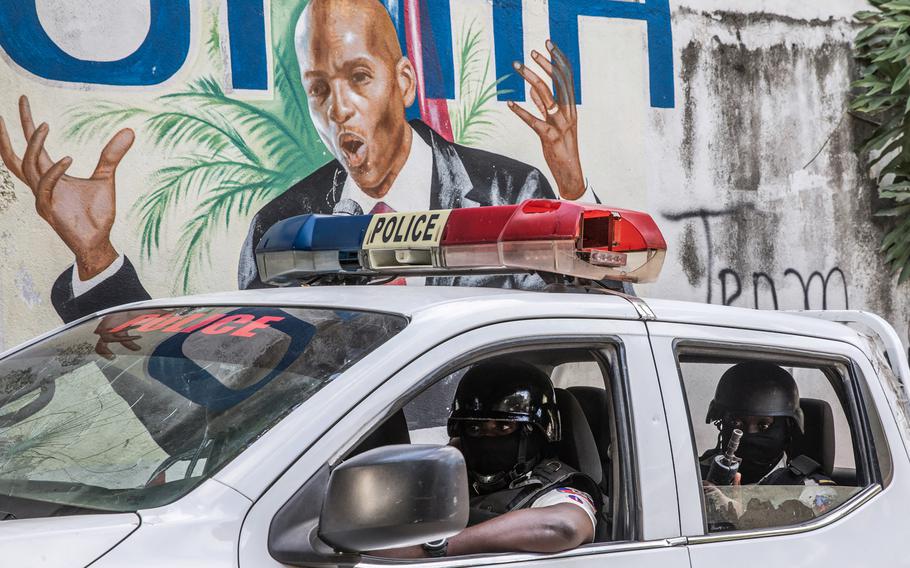 A police convoy drives past a wall painted with the president’s image down the alley of the entrance to the residence of the president in Port-au-Prince on July 15, 2021, in the wake of Haitian President Jovenel Moise’s assassination on July 7, 2021. (Valerie Baeriswyl/AFP/Getty Images)

JAMAICA (Tribune News Service) -- Jamaican court cleared the way Thursday for the extradition of a key suspect to Miami in the assassination of Haitian President Jovenel Moïse.

Former Haitian Sen. John Joël Joseph, who was arrested in Jamaica earlier this year after months of hiding in Haiti, was being held on an immigration violation charge after illegally entering the English-speaking Caribbean nation with his wife and children. After multiple postponements and court appearances, the one-time politician’s case was finally resolved Thursday when the chief prosecutor decided not to move forward with the case.

Joseph, whose passport shows his last name as John, had waived an extradition court hearing in order to be brought to the United States, where he will most likely be charged in connection with the still unsolved assassination. He would be the third suspect charged in Miami.

The U.S. Attorney’s Office declined to comment on Joseph’s expected extradition to Miami. A criminal complaint is expected to charge him with conspiring to provide “material support” in a plot to kill a foreign leader. It would be similar to the case brought against a Colombian commando accused of participating in the deadly attack on the president’s Port-au-Prince suburban home and against a convicted Haitian drug trafficker accused of supplying weapons and other support in that assault last July.

Both the U.S. and Haiti had made requests for Joseph to be handed over. The U.S. request first came up last month as Joseph appeared in court for a fifth time. There was no mention of Haiti’s request, despite confirmation from two senior Haitian government officials that a letter was sent to Kingston requesting that Joseph be turned over to them.

Joseph, his wife and two sons were arrested at a home in rural St. Elizabeth parish in early January. His wife and kids have requested political asylum in Jamaica and are currently appealing a decision not to grant it to them. ©2022 Miami Herald.