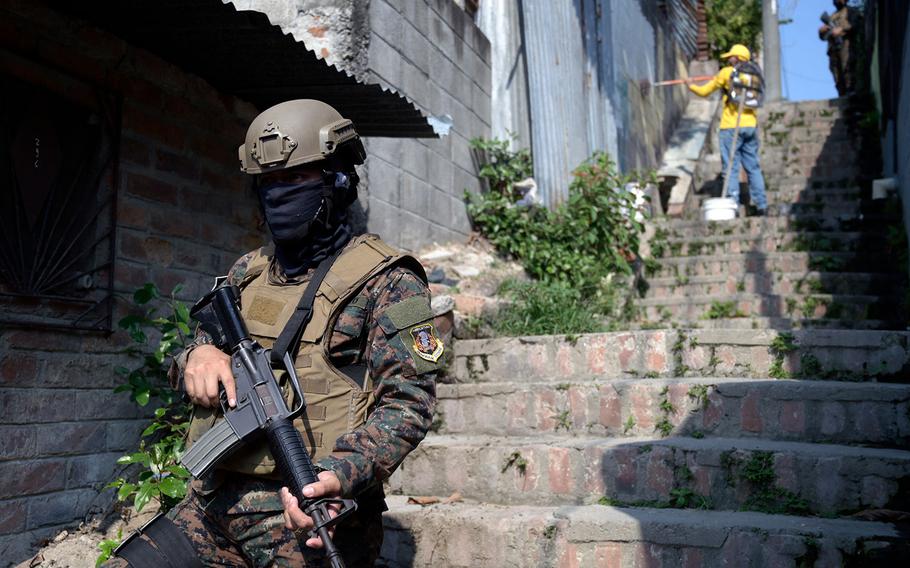 Inmates of the “La Esperanza” prison escorted by guards and soldiers paint over graffiti linked to the Mara Salvatrucha gang, at the 22 de Abril community, in Soyapango, on the eastern outskirts of San Salvador, during an operation to take back gang-controlled neighborhoods on April 7, 2022. (Marvin Recinos/AFP via Getty Images/TNS)

He sent soldiers into poor neighborhoods to round up thousands of people who he claimed were gang members, then paraded them in front of news cameras in their underwear and handcuffs.

He tweeted pictures of detainees who had been bruised and bloodied by security forces, suggesting they “maybe fell” or “were eating fries with ketchup.”

And he started feeding the nation’s prisoners two meals a day instead of three, warning that if violence continued, “I swear to God that they won’t eat a single grain of rice.”

It is a distinct look for Bukele, who has been focused in recent months on presenting himself to the world as a modern tech innovator on a quest to turn El Salvador into a cryptocurrency paradise.

Not only is Bukele now embracing the mano duro techniques of past Latin American leaders, he is going much further, using the homicide spree — which left 87 people dead in three days — as a pretext for suspending civil liberties and attacking the press.

In recent days, Bukele and his loyalists in the Legislative Assembly ordered a state of emergency that restricts freedom of association, suspends the norm that detainees be informed of their rights at the moment of arrest and denies prisoners access to lawyers.

Suspects can now be held for 15 days without charges instead of only 72 hours, meaning the vast majority of the recent arrestees have yet to see a judge. Congress also authorized prison sentences of up to 15 years for news outlets that disseminate messages from the gangs — a vaguely worded statute that press freedom activists fear Bukele will use to crack down on his media critics.

“The rise in homicides shouldn’t be a justification for the total suspension of rights,” said Ruth López, the anti-corruption director at the Central American human rights organization Cristosal.

Since he took office in 2019, Bukele and his congressional allies have steadily amassed more power. They have seized control of the Supreme Court, replaced the attorney general with a Bukele ally and removed hundreds of prosecutors and lower court judges, a purge that Human Rights Watch says has left “virtually no independent institutions capable of overseeing the executive branch.”

That Bukele would use the spate of homicides as a pretext to further consolidate power is no surprise to many of his critics, who believe he may be preparing to stay in office past 2024, when he is supposed to step down, even though El Salvador’s constitution bans consecutive presidential terms.

But they also say that there may be another motive for his new tough-on-crime stance: diverting attention from the deepening failure of his cryptocurrency experiment.

“This isn’t public policy or part of a security plan,” López said. “This is total improvisation based on public relations and the burnishing of his image.”

Last year, Bukele took many in El Salvador by surprise when he pushed a proposal through the Legislative Assembly that made bitcoin legal tender alongside the U.S. dollar.

The move was praised by global cryptocurrency evangelists but worries economists and international lenders such as the International Monetary Fund, which has indicated it will not give El Salvador a much-needed loan unless it drops bitcoin.

In response, Bukele announced a first-of-its-kind $1 billion “bitcoin bond.” The offering, which has been panned by traditional banks, was expected in March but has been delayed indefinitely. This week, Bukele pulled out of a planned appearance at a major cryptocurrency conference in Miami, citing “unforeseen circumstances in my home country that require my full-time presence.”

El Salvador’s gangs, which emerged in the 1990s after the U.S. began deporting thousands of immigrants who had been convicted of crimes, have long preyed on society, extorting payments from small-business owners in many regions.

In 2018, the country averaged about nine killings a day, a significant drop compared with just a few years earlier, when there were 17 homicides daily. Under Bukele, that average fell to around four.

Bukele has credited his so-called territorial control plan, a security program whose details he has never revealed.

But investigative journalists and U.S. officials explain the dramatic reduction of homicides very differently, saying Bukele’s administration has negotiated with the gangs to bring down the killings.

The U.S. Treasury Department recently announced sanctions against Bukele’s vice minister of justice and a top presidential aide for cutting a deal with leaders of the MS-13 gag. The sanctions followed reporting from the investigative news site El Faro that revealed evidence of the pact, including prison reports from covert meetings between officials and gang leaders.

Bukele has vehemently denied those claims.

Many in El Salvador assume that the explosion of violence late last month signaled a breakdown of the truce.

In the ensuing crackdown, the military has set up checkpoints in poor neighborhoods and police have been ordered to stop and frisk anyone they suspect. More than 6,000 people have been arrested by security forces.

Bukele claims they are all gang members, and given the country’s history of gang warfare, a large segment of the population appears to have little problem with his tactics.

But human rights advocates say the arrests have been indiscriminate, with many innocent people swept up and their basic rights to due process denied.

In the nation’s capital, families have gathered outside detention centers every day waiting for news of their missing loved ones.

“My son had never been detained, has never had any problems,” said one woman waiting outside a police station known as El Penalito this week who asked not to give her name because she is afraid of government retaliation.

Her 20-year-old son was arrested March 27 in a government raid on their town just miles west of San Salvador, and she had not heard from him since.

“He and my daughter sold fruits and vegetables where we live,” she said. “He just went to work and came straight back to the house. People from my church have been collecting money to help me. You think they would do that if my son was a gang member?”

The crackdown has left many young people in poor neighborhoods wondering whether they may be arrested next, said pastor Pedro González, who has asked parishioners at his church in a working-class neighborhood in the capital to write letters that male members can show security forces explaining that they are Christians.

“Almost the whole church has offered to sign letters, so when they get pulled over by the police, at least they’ll have something to show,” said González, whose nephew, a mechanic, was among those swept up in the raids.

“I don’t want to be silent,” González said. “I’m not gonna say everyone who lives in gang-controlled communities is a criminal.”