Mexican leader brushes off US allegations of Russia spies 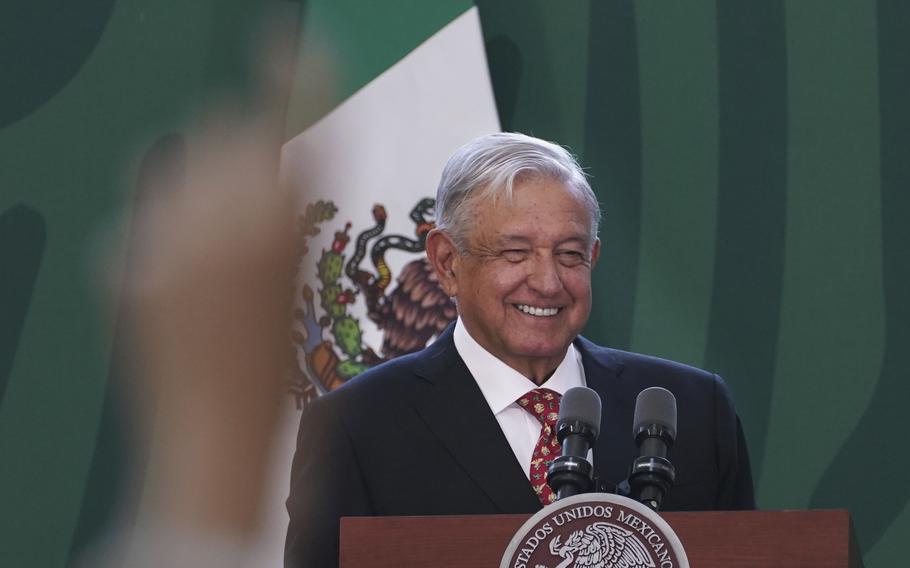 MEXICO CITY — Mexican President Andrés Manuel López Obrador on Friday brushed off comments by a senior U.S. military official who said there are more Russian spies in Mexico than anywhere else in the world.

That was an apparent reference to Russia's huge embassy in Mexico City, which has a decades-old reputation for being an espionage hub.

Responding to a question, López Obrador said Mexico was nobody's colony and didn't send spies abroad. But those were two things that Gen. Glen VanHerck, head of U.S. Northern Command, had not mentioned.

VanHerck said Thursday before the U.S. Senate Armed Services Committee that "the largest portion of the GRU members is in Mexico right now. Those are Russian intelligence personnel."

"Mexico is a free country, independent and sovereign, we are not a colony of Russia, China or the United States," López Obrador said. "We don't go to Moscow to spy on anybody, nor do we go to Beijing to spy on what they are doing.

"We don't go to Washington, not even to Los Angeles. We don't get involved in that," he said.

Despite Mexico's enormous commercial ties to the United States, the country has traditionally tried to preserve a measure of independence and nonalignment in foreign policy, and many Mexicans have long seen Russia and Cuba as counterbalances to U.S. dominance.

For example, members of Mexico's Congress drew a rebuke from U.S. Ambassador Ken Salazar this week when they formed a Mexico-Russia "friendship committee." The idea of Mexico drawing closer to Russia or splitting with the United States on the issue is something "that can never happen," Salazar said.

The group held a meeting in the Congress building with Russian Ambassador Viktor Koronelli, who told them, "For us this is a sign of support, of friendship, of solidarity in these complicated times in which my country is not just facing a special military operation in Ukraine, but a tremendous media war."

Morena Congressman Armando Contreras Castillo said: "We are always ready to do everything we can to increase the friendship, relations and cooperation between Mexico and Russia in every aspect of the world and life."

Mexico has refused to send any aid to Ukraine or impose sanctions on Russia, but did cosponsor a U.N. resolution condemning the invasion.

The huge mansion that holds the Russian Embassy in Mexico City is far out of scale to the very limited trade, tourism and commercial ties between the two countries and has long been thought to be a hub for spies.

Lee Harvey Oswald, the gunman in the 1963 assassination of President John F. Kennedy, made never fully explained visits to the Soviet and Cuban embassies in Mexico City before the killing.

More recently, U.S. security archives show several cases in which people convicted of selling sensitive U.S. information to the Soviets in the 1960s and 70s met with handlers or contacts in Mexico City.

And in February, a prominent Mexican scientist who led a double life with two families on separate continents pleaded guilty to a charge of being coopted by Russian agents into surveilling a U.S. government informant residing in Miami.

Hector Cabrera Fuentes was arrested in 2020 at Miami International Airport as he and his Mexican wife -- the other is from Russia -- were looking to return to their home in Mexico City.