Asylum-seekers in Tijuana protest disparities in treatment at US border 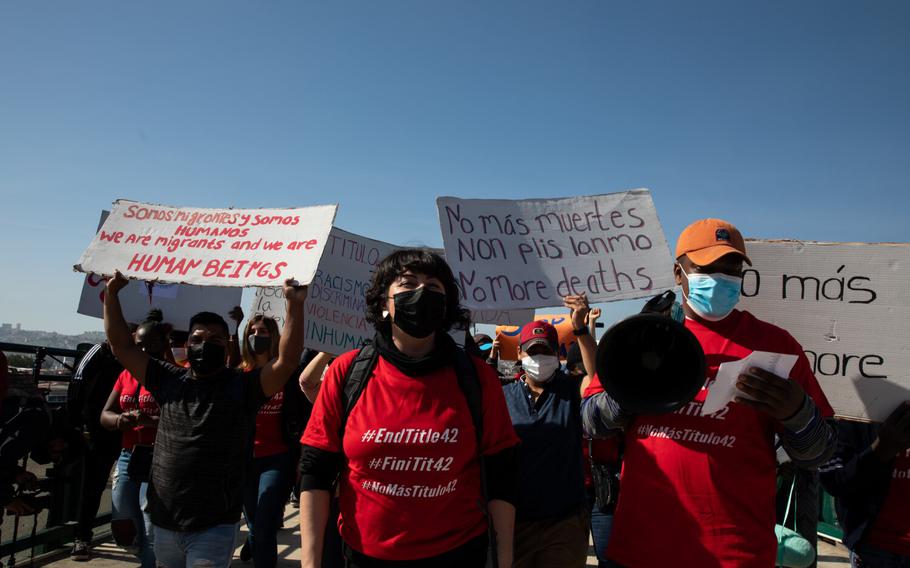 TIJUANA, Mexico (Tribune News Service) — Asylum-seekers and their supporters marched toward the San Diego-Tijuana border on Monday in demonstration against a border policy that has kept thousands from being able to request protection in the United States.

They also criticized the disparities that the policy, known as Title 42 has caused, as Ukrainians are now being allowed to cross and request protection while asylum-seekers from elsewhere in the world are turned away.

As part of the demonstration, a small group of asylum-seekers tried to request protection at the San Ysidro Port of Entry, but Customs and Border Protection officers told them that they could not come in.

Organized by the group Defend Asylum, the march marked two years since the Trump administration implemented Title 42, which border officials can keep out asylum-seekers and other migrants who don’t have documents to enter the United States. If they try to cross onto U.S. soil without permission, the policy says that officials can expel them back to Mexico or their countries of origin.

“Asking for asylum is a right for anyone in danger in their country of origin,” said Francel, a Haitian asylum seeker, speaking in Spanish. “We ask for no more Title 42, no more deportations that put people’s lives at risk.”

He said that his sister died last year after she was expelled under Title 42 to Haiti.

CBP did not respond to a request for comment. The Biden administration has said that Title 42 is necessary to slow the spread of COVID-19, but critics, including many public health experts, have questioned the validity of the policy.

When asked previously about the disparities in who is being allowed to request protection, a spokesperson for the Department of Homeland Security said that the Title 42 order from the Centers for Disease Control and Prevention remains in place.

“The Department of Homeland Security continues to operate in accordance with that order to the greatest extent possible,” the spokesperson said. “Consistent with the CDC order, DHS excepts particularly vulnerable individuals, on a case-by-case basis, from Title 42 for humanitarian reasons.”

Mari, 34, said she fled Jalisco with her children due to threats from organized crime and her former partner and arrived in Tijuana about seven months ago. While the family has been waiting, her granddaughter was born.

The baby, at 1 month and 15 days old, was the youngest participant in the march of roughly 50 people.

Carolina, a 58-year-old transgender woman from Mexico, said that she was there to represent the LGBTQ community as well as older migrants.

“I don’t feel safe in my country,” Carolina said. “The Ukrainians also have a right (to request asylum) because of what is happening to them, but they should give us the same opportunity.”

Guerline Jozef of Haitian Bridge Alliance read a statement written by a group of Jamaican women who are stuck in Tijuana after fleeing their country because of the threats and discrimination that they face as lesbians. The group didn’t want to identify themselves in front of the media.

The women said they had faced discrimination in Tijuana as well as back home. While in downtown Tijuana, the women had been arrested by city police and held in Mexican immigration custody for 16 days, they wrote, adding that it was the worst time of their lives.

“It hurts not to be able to live freely and be ourselves,” Jozef read. “We want to live. We don’t want to die. We want to be free.”

The demonstrators chanted as they walked from a nearby migrant shelter to a pedestrian bridge near the San Ysidro Port of Entry.

They held bilingual signs including “Everyone has the right to life” and “We are migrants and we are human beings.”

A smaller group of asylum-seekers — Mari’s family, Carolina, and a family from Guerrero — walked up to the line to try to request protection in the United States, accompanied by attorneys, activists and the press.

Mexican police ushered the group down a car lane instead of the sidewalk where pedestrians wait to cross the border. Since last week, a chain link fence had been installed, separating the sidewalk from the car lane. When the group reached the border line, a newly installed crowd control fence prevented the group from walking up to the pedestrian entrance. CBP officers and plainclothes officials were watching from just inside the United States.

An officer with a badge carrying the name “Schneider” stepped forward to speak with the group. She shook her head.

Mari didn’t know exactly what the woman said since Schneider was speaking in English, but Mari knew what she meant.

Mari felt sad and rejected as she arrived back at the shelter, she said.

“I feel like we have no worth,” she added.