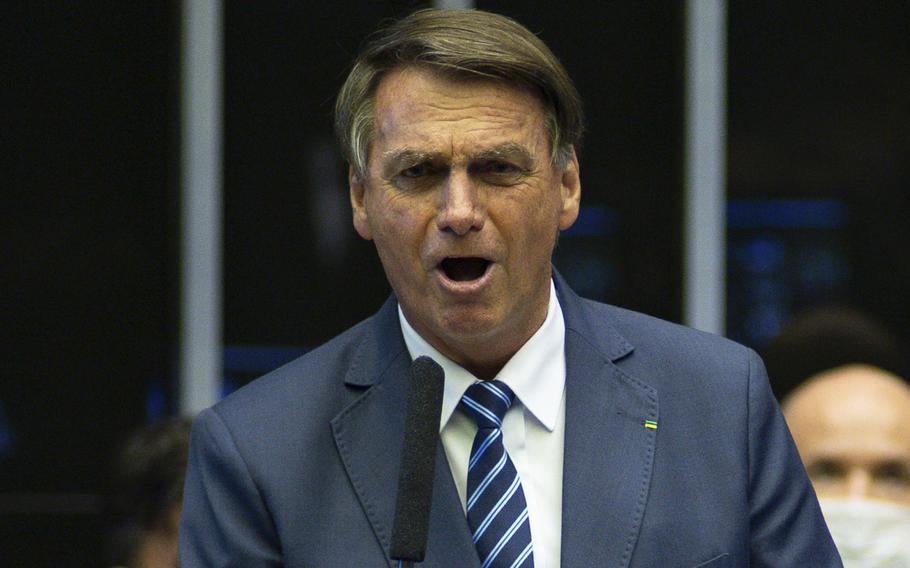 He has chafed against their size, questioning why Indigenous peoples have been granted control 13% of Brazil's territory. He has hungered over their resources: "Where there's Indigenous land, there are riches beneath it." And he has been the driving force behind a bill that would allow large-scale mining in the pristine territory, which could trigger what scientists warn would be an environmental and humanitarian catastrophe.

Now, Bolsonaro says, Brazil finally has all the reason it needs to pass the legislation:

War between Russia and Ukraine.

"This crisis is a good opportunity for us," Bolsonaro said.

Brazil is the world's largest exporter of soy and coffee. It needs a steady supply of fertilizers to power its mighty agricultural industry. But its largest international supplier of fertilizers is Russia, which last year sold Brazil roughly $3.5 billion worth. Economic sanctions imposed by Western countries have caused Russia to announce it will suspend that flow, fueling worries here that Brazil may soon face a shortage.

The solution, Bolsonaro says, is to pass the mining legislation. He says Brazil can find the potassium it needs to produce its own fertilizers on Indigenous lands.

That argument has outraged environmentalists and Indigenous communities - but also brought the legislation to the doorstep of passage. Conservative lawmakers, who control the Brazilian house of representatives, are now fast-tracking the legislation. They have bypassed committee debate and are expected to approve it by next month on what's likely to be a partisan vote. It's unclear whether the Brazilian senate will follow suit.

"What we want is this: If there is a reserve of potassium or phosphate on Indigenous land, should you be able to go in there and get it? You should," said conservative congress member Sérgio Souza, who leads the house's rural bloc. "The Indigenous community can participate in this."

But scientists have been quick to point out a flaw in the plan. If Brazil wants potassium, it won't find much on Indigenous land. More than two-thirds of the country's potassium reserves are located outside of the Amazon rainforest, according to researchers at the Federal University of Minas Gerais. And inside the forest, only 11% of the reserves are on Indigenous land.

"They are proposing a false solution to a real problem," said Raoni Rajão, who researches supply chain production in the Amazon. "This solution won't do any good."

The potential environmental impacts of the legislation are immense. Indigenous land is one of the greatest safeguards against deforestation. Only 3% of Indigenous land in the Amazon is deforested, a rate far lower than on government and private lands.

Mining - particularly for gold, the mineral that draws the greatest interest in the Amazon - has an insidious effect on the environment. The preferred tool in the process is mercury, which collects and purifies traces found in the soil. But it also poisons nearly everything it touches - soil, air, water. River ecosystems have collapsed, leaving Indigenous communities poisoned. The earth never returns to normal.

"The forest is destroyed, and the principal method is mercury," said Larissa Rodrigues, project manager at the São Paulo-based Choices Institute, which researches sustainable development. "And then it spreads out. It doesn't stay in one place."

The potential fallout has left even proponents of mining on Indigenous land ambivalent.

"This legislation doesn't benefit anyone," said Luiz Maurício Azevedo, president of the Brazilian Association of Mineral Research Companies. "It doesn't benefit Indians and it doesn't benefit Brazilian society. It could partially benefit illegal miners . . . but we'll suffer environmental damage and a blow to our image so significant that it won't be worth it."

The debate is already feeding into the Brazilian culture wars over the environment, Indigenous rights and the Amazon.

In recent years, as Brazil transformed itself into an agricultural powerhouse, a newly confident political ideology has emerged from the country's heartland. Its politics were far more conservative, opposed to environmental restrictions and suspicious of claims that Indigenous peoples need so much land. The national congress is now stacked with politicians who condemn the protections as impediments to realizing Brazil's potential as a global power.

Much of the developed world knocked down its forests, goes a frequent refrain. Why can't we?

"This bill has everything to do with ideology," said Maurício Angelo, founder of the Mining Observatory, an investigative journalism and research institute based in Brasília. "It is to please the federal government's base of support - the members of congress, the agricultural bloc - people who have always been in favor of this legislation."

The bill's supporters say it will bring income and jobs to impoverished Indigenous communities and also regularize and tax the illegal mining that is already there.

Guilherme Aggens, a partner in an Amazonian mineral consultancy firm, said he knew of several regional Indigenous communities that have gone into business with illegal gold miners, offering use of their land for a cut of the proceeds.

"The people that live in villages along the Tapajós river are in extreme poverty," he said. "Illegal mining is sometimes the only way they can make any money for their survival."

But Indigenous communities warn of grave consequences if the government passes the legislation.

Kâhu Pataxó, an Indigenous leader in the state of Bahia, said he has seen the wreckage left behind by illegal mining: "Rivers that were once sweet are now bitter."

He said Indigenous people are out of options. They have tried to resolve territorial issues with diplomacy and political channels, he said. But he worried those efforts have failed.

"We're heading down a path where, for Indigenous to maintain their existence and their territories, they will have to confront the issue physically," he said. "We're on the edge of a civil war, and if mining is legalized, this is what is going to happen."