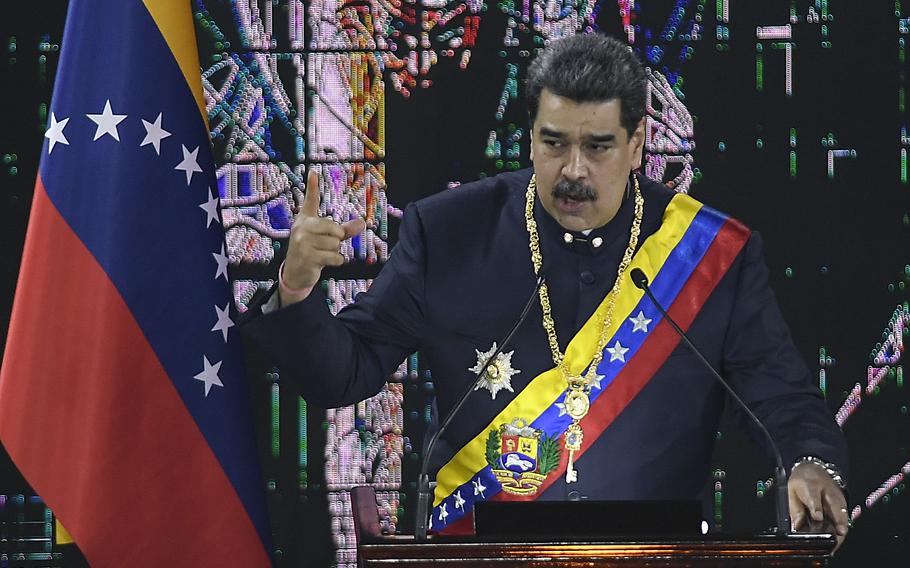 Venezuelan President Nicolas Maduro speaks during a ceremony marking the start of the judicial year at the Supreme Court in Caracas, Venezuela, Jan. 27, 2022. Maduro signaled an interest in improving relations with the U.S. following talks with high-level American officials prompted in part by Russia’s invasion of Ukraine and concerns of rising gas prices in the U.S., in a televised meeting with cabinet members late Monday, March 7, 2022, but did not provide details of the discussions. (Matias Delacroix/AP)

WASHINGTON — The Venezuelan government has freed two jailed Americans, including an oil executive imprisoned alongside colleagues for more than four years, as it seeks to improve relations with the Biden administration amid Russia's war with Ukraine, the White House announced Tuesday night.

Gustavo Cardenas was released following a secret weekend visit to Venezuela by senior Biden administration officials, the first White House trip to the county in more than two decades. Also freed was Jorge Alberto Fernandez, who was arrested last year on what the White House described as "spurious charges."

"These men are fathers who lost precious time with their children and everyone they love, and their families have suffered every day of their absence," President Joe Biden said in a statement.

The men have arrived home in the U.S., Secretary of State Antony Blinken said Wednesday morning.

The release came hours after Venezuelan President Nicolás Maduro signaled an interest in improving relations at a time when Russia's invasion of Ukraine has sparked concerns in the United States over rising gas prices. In a televised address, he appeared to indicate he was willing to accede to U.S. demands that he resume negotiations with his opponents as a first building block for any relief from U.S. sanctions that have been punishing the OPEC nation for years.

U.S. officials have not detailed any other specific outcomes of the talks, but said the release reflected months of relationship-building, particularly involving Roger Carstens, the administration's special presidential envoy for hostage affairs.

Carstens made a trip to Venezuela in December that did not immediately result in the release of detainees but that senior administration officials credited with establishing trust and laying the groundwork for Tuesday's outcome. He returned to Venezuela last weekend with other administration officials including Juan Gonzalez, the National Security Council director for the Western Hemisphere, and Ambassador James Story, who heads the U.S. government's Venezuelan Affairs Unit out of neighboring Colombia.

The Biden administration described it as the first Venezuela visit by a White House official since Hugo Chavez led the country in the late 1990s, and a rare opportunity to discuss policy issues with the Maduro government. One official described it as "a constructive, diplomatic but very candid dialogue" that did not entail any quid-pro-quo but allowed the Biden administration to share its "view of the world" with Maduro.

Senior administration officials, speaking to The Associated Press on condition of anonymity under ground rules set by the White House, declined to say how Cardenas and Fernandez were selected for release among nearly 10 American detainees held in Venezuela. But they said Carstens pushed hard for the release of all of them, and that the possibility of additional releases remains.

Cardenas and five other executives of Houston-based Citgo, a subsidiary of Venezuela's state-owned oil giant, had been in detention in Venezuela since 2017 when they were led away by masked security agents while at a meeting in Caracas. They had been lured to Venezuela in order to attend a meeting at the headquarters of Citgo's parent, state-run oil giant PDVSA.

They were sentenced on charges stemming from a never executed plan to refinance some $4 billion in Citgo bonds by offering a 50% stake in the company as collateral. Prosecutors accused the men of maneuvering to benefit from the proposed deal.

The U.S. government pressed for their release, calling them wrongful detainees held without a fair trial.

Besides the other members of the Citgo 6, several other Americans remain held in Venezuela. Two former Green Berets, Luke Denman and Airan Berry, were arrested for their involvement in a confusing plot to overthrow Maduro, and former U.S. Marine Matthew Heath was detained on weapons charges.

Fernandez was detained in February 2021 near the border with Colombia after he was found in possession of a drone, whose use is restricted in Venezuela. He was accused of terrorism.

Gonzalo Himiob, a lawyer and vice president director of Foro Penal, said in a statement that the end of an arbitrary detention should be celebrated but warned of the consequences that can come from an agreement like the one that led to Cardenas' release.

"The release of any political prisoner, when it arises from an agreement between political actors, and not from respect for the law, confirms that from the beginning the reasons for the detention were neither legal nor valid, but political and, consequently, arbitrary and contrary to human rights," Himiob said.

The weekend discussions came a little more than three years after the U.S. broke off relations with Maduro and recognized opposition leader Juan Guaidó as Venezuela's legitimate leader.

The talks came together after months of backchannel efforts by intermediaries — American lobbyists, Norwegian diplomats and international oil executives — who have been pushing for Biden to revisit the so far unsuccessful "maximum pressure" campaign to unseat Maduro that he inherited from the Trump administration.

But the impetus for the outreach to Maduro, who has been sanctioned and is indicted in New York on drug trafficking charges, took on added urgency following Russia's invasion of Ukraine and ensuing U.S. sanctions. The Ukraine crisis promises to reshuffle global alliances and add to rising gas prices driving inflation already at a four-decade high.

Powerful Democrats and Republicans alike on Capitol Hill last week began voicing support for a U.S. ban on Russian oil and natural gas imports as the next step to punish Russian President Vladimir Putin for the invasion.

Venezuela is Putin's top ally in Latin America and a top oil exporter. Its reentry into U.S. energy markets could mitigate the fallout at the pump from a possible oil embargo on Russia. But the discussions in Caracas were quickly condemned by top Democrat and Republic senators.

U.S. Sen. Bob Menendez, the Democratic chairman of the Senate Foreign Relations Committee, said Biden's efforts to unite the world against Putin "should not be undercut by propping up" Maduro, whose government is under investigation by the International Criminal Court for possible crimes against humanity committed against protesters in 2017.

The U.S.-backed faction of the opposition on Wednesday insisted that it remains open to resuming negotiations with Maduro with the goal of scheduling free and fair presidential and congressional elections and said any easing of economic sanctions must be accompanied by advances toward democracy.

"The lifting of any measure of pressure, if it is not oriented toward democratization, would only strengthen the authoritarianism that threatens the world today," the group said in a statement. "... Only a Venezuela with democratic, institutional and transparency guarantees can be a reliable and efficient energy provider for the world."