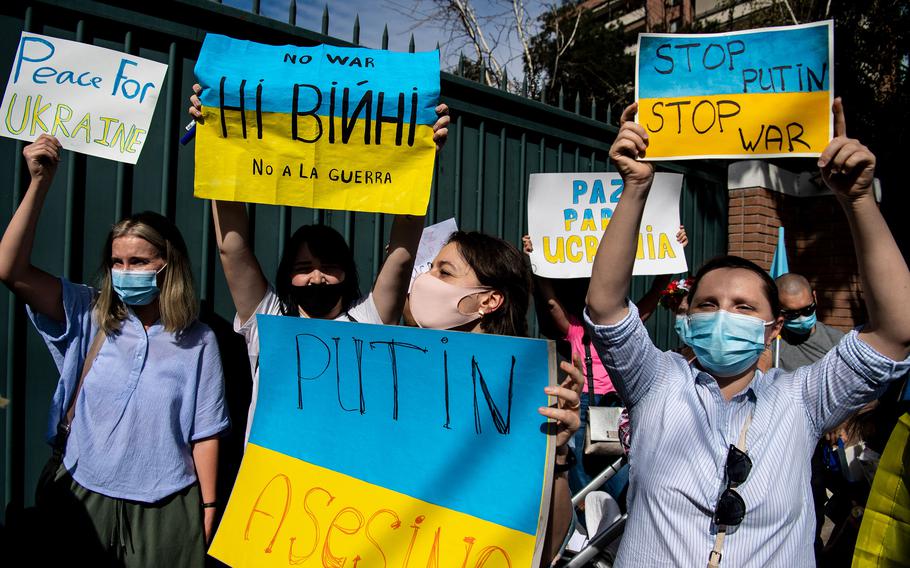 Ukrainian citizens hold posters during a protest in support of Ukraine in front of the Russian Embassy in Santiago, Chile, on Thursday, Feb. 24, 2022. (MARTIN BERNETTI/AFP)

(Tribune News Service) — Latin American and Caribbean leaders reacted to the news Thursday of the Russian invasion of Ukraine with a flurry of statements, videos and tweets that ranged from open condemnation to avoiding direct criticism to even backing the aggression, highlighting the increased polarization of the Western Hemisphere.

As President Joe Biden works to build an international coalition to isolate Russian President Vladimir Putin, the issue will likely generate more friction with some of the Latin American governments that so far have issued a half-hearted response to the invasion.

Here are some of the reactions from regional leaders to Russia’s military aggression.

Populist President Andres Manuel Lopez Obrador is already facing domestic criticism, including from former Mexican diplomats, for what they say is a lukewarm response to Russia’s military attack on Ukraine.

In his daily morning press conference, Lopez Obrador said his government “will continue promoting dialogue, that force is not used, that there is no invasion. We are not in favor of any war.” But he stopped short of explicitly condemning Russia’s incursion into Ukraine.

“Mexico has always supported peace and peaceful solutions,” he said.

In a similar tone as Mexico, the Peruvian Foreign Ministry rejected the use of force but avoided mentioning Russia in a tweet expressing its “profound concern about the evolving events in Ukraine.” The statement called for ceasing hostilities.

Earlier this month, left-leaning Argentine President Alberto Fernández offered his country as Russia’s “gateway to Latin America” during a meeting with Putin. Facing intense criticism, his government quickly issued a statement on Thursday morning lamenting the situation in Ukraine, rejecting the use of force and calling on Russia “to cease its military actions in Ukraine.” But in the afternoon, Fernandez said he was calling “on all parties not to use military force,” triggering again criticism for what some saw as a reluctance to denounce Russia as the aggressor.

President Jair Bolsonaro’s trip to Moscow last week, as tensions over Ukraine were escalating, already created discord with the U.S. government. Brazil’s statement Thursday probably did little to improve the state of relations, which have gone colder since former president Donald Trump left the White House.

In the statement, the Brazilian government said it is “deeply concerned about the military operations launched by Russia against Ukraine territory” and called for the cessation of hostilities. But it did not condemn Russia’s actions.

“From Chile, we condemn the invasion of Ukraine, the violation of its sovereignty and the illegitimate use of force,” he said on Twitter. “Our solidarity will be with the victims and our humble efforts with peace.”

Colombia, a “major non-NATO ally” of the United States, issued a forceful condemnation of Russian actions.

“Colombia categorically rejects the attacks against Ukraine by Russia,” President Ivan Duque said on Twitter early Thursday. “These events threaten the sovereignty of Ukraine and put the lives of thousands of people at risk, in an unquestionable situation contrary to International Law and the UN Charter.”

The Caribbean Community organization known as CARICOM, made up of 20 nations, said it “strongly condemns the military attacks and invasion of Ukraine by The Russian Federation and calls for the immediate and complete withdrawal of the military presence and cessation of any further actions that may intensify the current perilous situation in that country.”

In the statement, CARICOM also criticized the recognition by Russia of the Ukrainian regions of Donetsk and Luhansk as independent, calling it a “violation of the territorial integrity and sovereignty of Ukraine.”

The authoritarian leaders of the three closest allies of Russia in the Americas had no comment on the Russian attacks Thursday. But they have previously expressed their support for Russia’s actions in Ukraine, which the three have justified saying Russia has the right to defend against American and NATO expansion in Eastern Europe.

As Putin was preparing to launch the attack on Ukraine, Cuban leader Miguel Díaz-Canel was meeting with the chairman of the lower house of Russia’s Federal Assembly, Viacheslav Volodin, late Wednesday.

According to Cuban state media, the Cuban leader expressed his “solidarity with the Russian Federation in the face of the imposition of sanctions and the expansion of NATO towards its borders.”

But unlike Nicaragua’s Daniel Ortega and Venezuela’s Nicolás Maduro, the Cuban leader has avoided referring to Russia’s military incursion in Ukraine and has not publicly endorsed it.