'Freedom Convoy' demonstrators admit protest is near the end after police clear out most of them, making arrests and towing vehicles 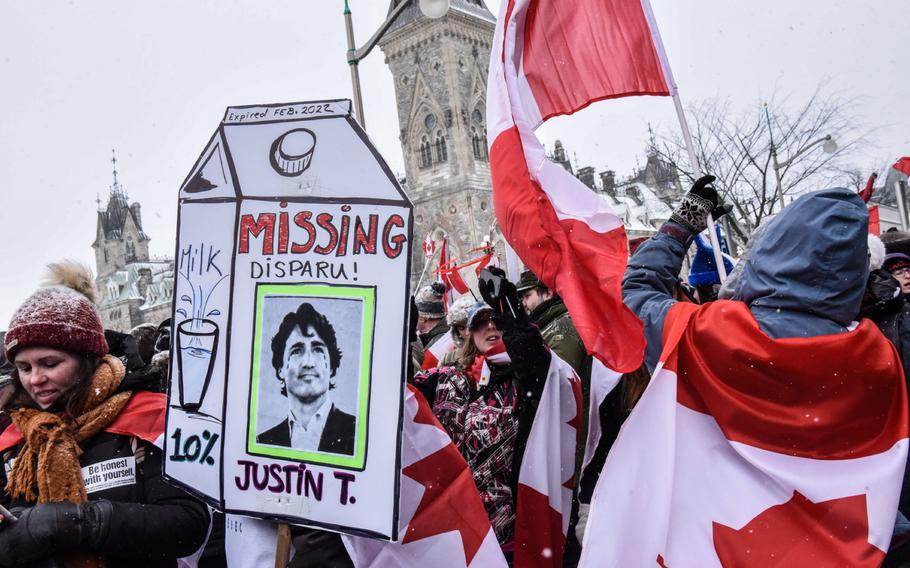 Protesters are seen during a demonstration near Parliament Hill in Ottawa, Ontario, Canada, on Feb. 12, 2022. (Stephanie Keith/Bloomberg )

OTTAWA — Police escalated operations Saturday and cleared out the bulk of Ottawa's self-styled "Freedom Convoy" protesters to bring an end to more than three weeks of disruption declared illegal under an unprecedented emergency order.

The protests opened a new chapter in far-right and anti-health mandate movements at home and abroad while shaking up Canadian politics and raising numerous questions about law enforcement and why it took so long to unclog the streets of Canada's capital city.

Defiant demonstrators, draped in Canadian flags, acknowledged that the protest's end was near Saturday even as some made a last stand. But several told The Washington Post that they planned to regroup or join future anti-government demonstrations.

"We are going to win," people shouted at police even as they were forced to retreat.

Interim Ottawa police chief Steve Bell warned them of consequences ahead. "If you are involved in this protest, we will actively look to identify you and follow up with financial sanctions and criminal charges," he said.

Police said they arrested 170 protesters as of Saturday afternoon, but standoffs continued in the snow and freezing temperatures, which dipped into the teens, as law enforcement officers pushed to disperse straggling demonstrators, and tow trucks slowly pulled away the remaining parked big rigs that have paralyzed parts of the city, including Parliament Hill, the seat of Canada's government.

As protesters' numbers dwindled, law enforcement officers armed with batons and guns, some on horseback, appeared to advance at a faster and more forceful pace than the day before as a drone hovered above. Though largely restrained, tensions remained high, as protesters, facing hefty fines or prison time, continued to gather along the remaining front lines, some bringing with them children and dogs.

At midday, organizers of one key group, Freedom Convoy 2022, much of whose leadership has been arrested or left Ottawa, issued a call for truckers to move from a central encampment in front of Canada's Parliament "to avoid further [police] brutality." They asked for police to give time for vehicles to move.

With so many moving parts - the presence of children, the possibility of violence, the tightly packed vehicles and combustible fuel - the police have taken a largely restrained approach, even by Canadian standards. Police officers, some in tactical gear, have continued to leave open exits for demonstrators and drivers who decide to leave.

Alongside arrests, police said they used a "chemical irritant," pepper spray, against some demonstrators they described as "assaultive." Police said in a tweet Saturday that some of the arrested had body armor, smoke grenades and fireworks on them.

"We told you to leave," Ottawa police said in a tweet Saturday. "We gave you time to leave. We were slow and methodical, yet you were assaultive and aggressive with officers and the horses."

As conditions unfolded on the ground, Canadian Parliament resumed debate Saturday over Prime Minister Justin Trudeau's invocation Monday of the 1988 Emergencies Act, which gives the government broad powers for up to 30 days. Parliament must vote within seven days of the act's invocation to approve or reject it.

Under the Emergencies Act, banks can freeze assets suspected of being used to fund the protest and can suspend the insurance and business accounts connected to vehicles found here. Thousands of dollars in fines have been imposed on drivers, several of whom told The Washington Post they did not expect to pay and would litigate in court.

Police say they can retroactively fine or charge people documented to be violating laws.

Use of the act is expected to be approved, although the move has drawn criticism from both the left and the right.

On Thursday, police set up about 100 checkpoints and other road closures in Ottawa's downtown to keep out protester reinforcements.

Barber was released on bail late Friday on the condition that he leave Ottawa and not contact or finance the protest, according to the Canadian Broadcasting Corp. Lich appeared in court Saturday on charges of counseling to promote mischief, but the judge in the case said she would have to wait a few days for a decision on bail.

Lich, Barber and a third organizer, Benjamin Dichter, who left Ottawa Friday, are named in a class-action lawsuit filed by Ottawa resident Zexi Li, 21, over damages caused by the demonstrations. 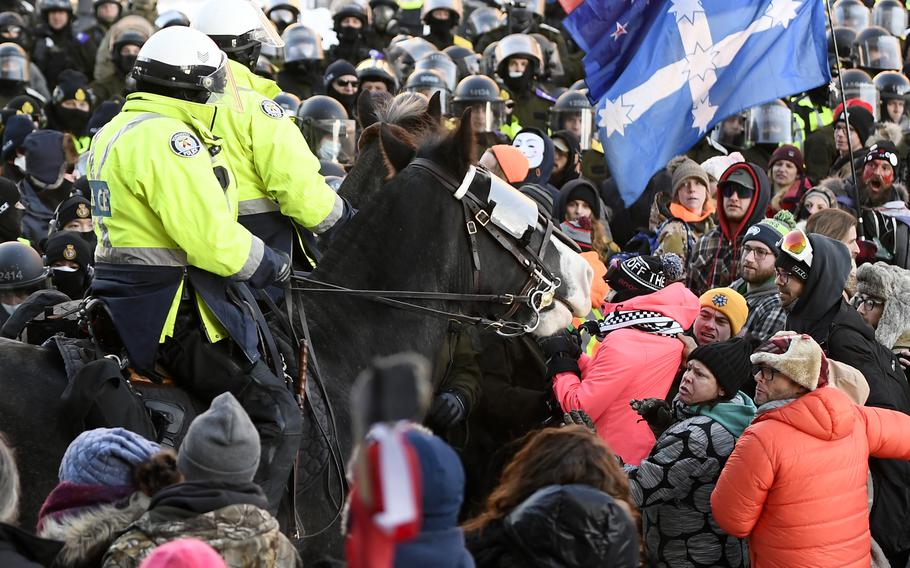 Protesters react as Toronto Police mounted unit move in to disperse them as police take action to put an end to a protest, which started in opposition to mandatory COVID-19 vaccine mandates and grew into a broader anti-government demonstration and occupation, Friday, Feb. 18, 2022, in Ottawa. (Justin Tang/The Canadian Press via AP) 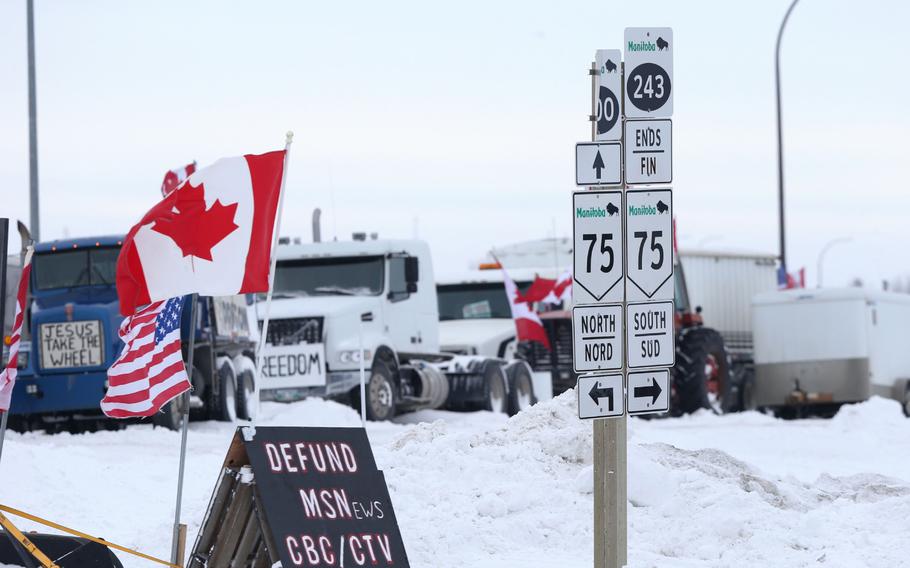 Peter Sloly resigned as Ottawa's police chief Tuesday after heavy criticism of his department's handling of the unrest.

While protesters held block parties the past three weekends as police stood by, many Ottawa residents complained of being harassed and intimidated by some demonstrators and being unable to sleep or work amid incessant honking and blocked streets.

Some protesters have demanded an end to all pandemic-related mandates. Others said they wanted Trudeau ousted or tried in court. The protests in Canada, which have also targeted and shut down border crossings, have inspired copycats in European capitals.

But Stephanie Carvin, an associate professor of international relations at Carleton University in Ottawa, said it was not "a movement driven by truckers frustrated by mandates."

"It is a movement of anti-government extremists that have successfully tapped into the exhaustion of a lot of Canadians who are frustrated after four lockdowns and going onto year three of this [pandemic]," she said. "They were able to frame their grievances around this issue."

Patrick Philon, 33, of Spanish, Ontario, said Saturday that he had great respect for the truckers, even those who left.

"They did their part to start a worldwide movement," he said by a police standoff next to the prime minister's office. "We will stand here and hold the line."

Philon was gearing up for what was next for him: joining another protest or satellite demonstrator camp around Ottawa.

Michael, a 66-year-old from Hamilton, Ontario, who would give only his first name because he said he feared his neighbors finding out he was here, grew emotional as he contemplated the end of the protest.

"I'm so moved by what these guys are doing, and I've been doing nothing," Michael said.

He acknowledged that what drew him out, in part, was what some would acknowledge as a "conspiracy" - the false claim that Trudeau was controlled by "globalists" and "the World Economic Forum," a sentiment shared by several protesters interviewed by The Post.

Michael said he had donated to the protest's now-frozen online fundraisers on GoFundMe and GiveSendGo, as well as more than 500 Canadian dollars in person.

"It's over," he said. "But just wait until the summer. . . . There will be something else like this that we didn't expect."