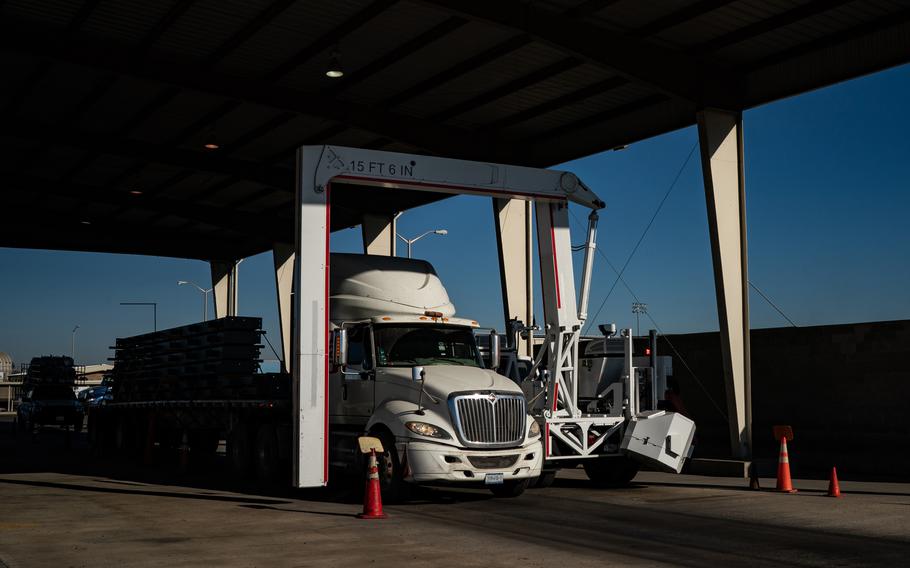 A truck goes through a scanner as it makes its way into the U.S. from Mexico at the Laredo Port of Entry in Laredo, Texas, on Jan. 14, 2022. (Salwan Georges/The Washington Post)

LAREDO, Texas — At the busiest commercial border crossing in North America, trucks stream into the United States at a rate of 500 per hour during peak times. Drug traffickers play the percentages.

Fewer than 5% of the vehicles are typically screened by U.S. Customs and Border Protection with the powerful high-energy scanners that can peer deep inside cargo loads to detect “anomalies” — odd patterns or suspicious densities that could be illegal drugs. The inspections require drivers to leave their vehicles and endure delays.

With fatal drug overdose deaths in the United States soaring to record levels, Congress has directed CBP to come up with a plan to scan 100% of arriving vehicles. Here and across the U.S. southern border, the agency is preparing to roll out new “nonintrusive” inspection systems to screen significantly more trucks.

These “multi-energy portals” will zap the cargo areas with high-energy waves, but use safer low-energy screening for the cab, allowing the drivers to remain in their vehicles and clear inspection faster, the agency says. “It’s going to be a game changer for us,” said Alberto Flores, the CBP director for the Laredo port of entry, who said each machine can scan eight times as many trucks per hour as the existing high-energy systems.

“With the more scans we do, the probability of a seizure will increase,” Flores said.

Laredo is the front line in the U.S. government’s long and often demoralizing effort to stop illegal drugs at the border. U.S. Interstate 35 runs from here all the way to Duluth, Minn., right up the middle of the United States. For long-haul trucking, it is the highway equivalent of the Mississippi River, a central artery into the American heartland.

The Mexican trafficking organizations that hide narcotics in commercial loads use I-35 no differently than Walmart or Samsung or Ford. Once the drugs get past CBP here in Laredo, their distribution routes are wide open. The entire contiguous United States is within a 1½-day drive.

CBP’s Laredo field office seized 588 pounds of the powerful synthetic opioid fentanyl during the 2021 fiscal year, an eleven-fold increase over the 50 pounds detected in 2020.

More than 100,000 Americans are dying each year from drug overdoses, and most of those fatalities are linked to fentanyl. Overdoses from fentanyl have become the leading cause of death for Americans ages 18 to 45, according to the latest data from the Centers for Disease Control and Prevention. A new study by Stanford University and the Lancet medical journal projects U.S. opioid deaths will reach 1.22 million this decade if no new action is taken.

The advent of fentanyl has posed the biggest challenge yet to the government’s conventional interdiction methods, including border inspections. The same thing that makes fentanyl so deadly — its potency — allows for its exceedingly compact size.

Smugglers use false vehicle panels, hidden compartments and bulk produce shipments to hide drugs. Gas tanks, engines and batteries can be adapted with secret chambers. The drivers may have no idea they’re ferrying drugs, so there’s limited value in officers looking for behavioral cues such as nervousness.

“It is a cat-and-mouse game,” said Flores. “We will adjust with the cartels just as they adjust to the way we do inspections.” 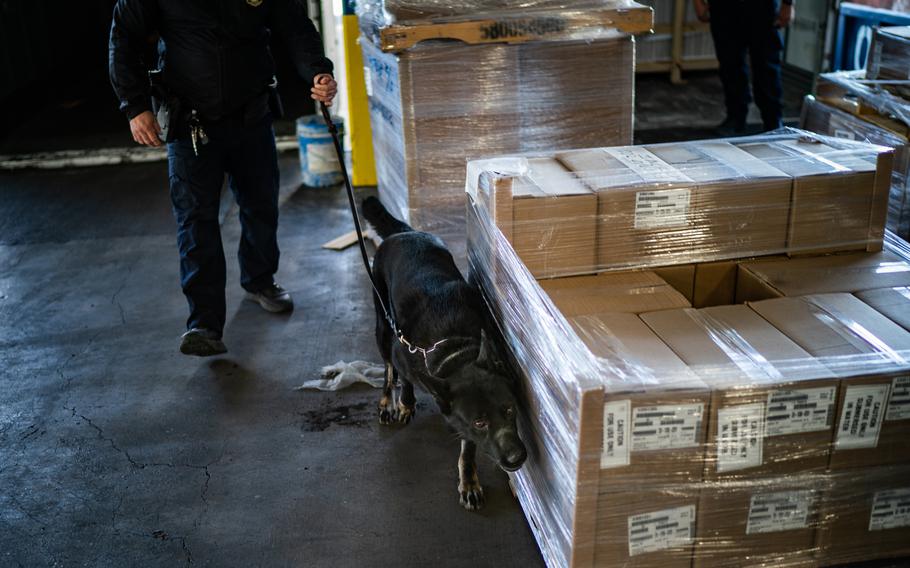 A U.S. Customs and Border Protection (CBP) officer and a K-9 inspect good from a truck at the Laredo Port of Entry in Laredo, Texas, on Jan. 14, 2022. (Salwan Georges/The Washington Post) A U.S. Customs and Border Protection (CBP) officer inspects a shipment of car batteries after seeing something unusual through a scanner at the Laredo Port of Entry in Laredo, Texas, on Jan. 14, 2022. (Salwan Georges/The Washington Post) A U.S. Customs and Border Protection (CBP) officer inspects a bus from Mexico at the Laredo Port of Entry in Laredo, Texas, on Jan. 14, 2022. (Salwan Georges/The Washington Post)

Flores and other CBP officials insist their detection efforts are not futile. Every narcotics seizure takes dangerous drugs off the streets, saving lives, they say. In recent years, CBP has boosted the percentage of rail cars it scans to 100 percent, and the agency views commercial trucks as the next phase of a longer effort to deploy nonintrusive inspection technology for cargo as well as passenger vehicles at U.S. ports of entry.

Lawmakers in states with surging overdose deaths are pushing the government to go faster.

“A smuggler with multiple pounds of fentanyl, concealed in hidden compartments, needs to know that there is no chance of getting across our border without some kind of search,” Sen. Rob Portman, a Republican, said in a speech on the Senate floor this month.

“It’s not just a gap in our security, it’s a gaping hole in our security,” said Portman, whose home state of Ohio has the fifth-highest number of drug overdose deaths per capita. “It’s resulting in lives being lost.”

CBP has started installing the multi-energy portals at the Brownsville, Texas, and Laredo ports of entry, part of a $480 million effort to expand the technology along the U.S.-Mexico border. The agency said it is distributing information to truck drivers assuring them the technology is safe, and allowing drivers with concerns to opt out in favor of slower, traditional inspection procedures.

Gil Kerlikowske, a CBP commissioner under President Barack Obama who also previously ran the White House Office of National Drug Control Policy, said more high-intensity scans at the border are a welcome addition, especially if they can occur without disruptions to trade. “The last thing you can do now is slow down shipping, given the past year and a half of supply chain issues,” he said.

But, Kerlikowske cautioned, “we’re not going to seize our way out of this issue. Every time we have new detection methods and better intelligence, we also have increased seizures, but increased seizures don’t seem to be resulting in fewer deaths.”

“In the long run, it’s prevention that will make a difference,” he said. 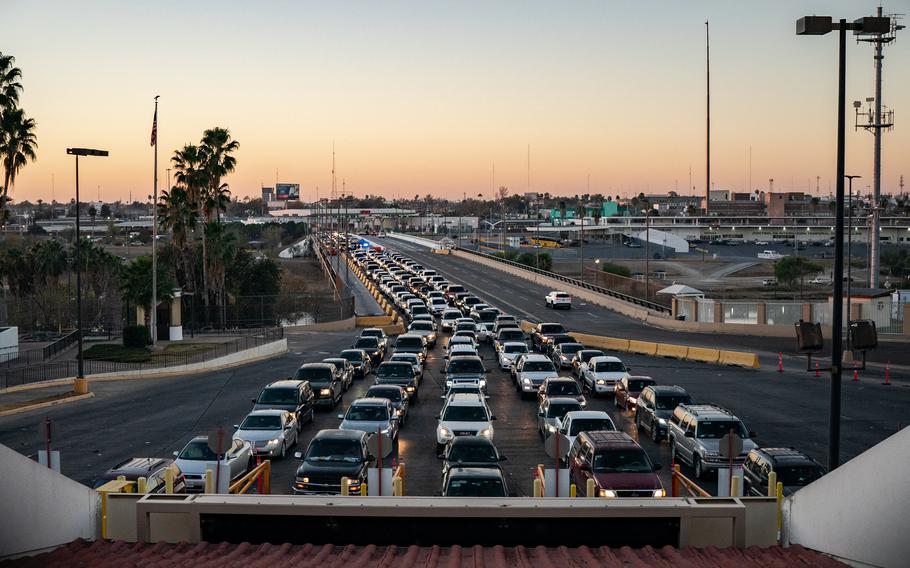 Cars are seen on Puente International Bridge as they make their way into the United States from Mexico at the Laredo Port of Entry in Laredo, Texas, on Jan. 14, 2022. (Salwan Georges/The Washington Post)

Along with the scanning equipment, CBP is adding a new software program, CertScan, that officials also describe as a breakthrough. It is designed to streamline and centralize the growing amounts of data flooding the inspectors’ monitors. In every border sector, CBP is planning to construct a central command center staffed by teams of “adjudicators” who will decide which trucks clear inspection and which ones should be subjected to a more thorough review by officers or K-9 teams.

The high-energy scans produce vivid 3D images of the vehicles and their cargo. In one control room at the port, veteran agents scrutinized a load of northbound water scooters, assembled in Mexico, which X-rays showed in intricate skeletal detail.

The adjudicators receive detailed manifest information about the trucks, their cargo and their drivers at least an hour in advance of a vehicle’s arrival. Established companies and shippers with clean records are lower-risk; a truck with a random load or unfamiliar company tends to draw more scrutiny.

The system incorporates data from QR code readers, license plate recognition software, a radio frequency identification system, live cameras and links to DHS databases. The CertScan program gives adjudicators a single portal to all of this information and the imagery from the multi-energy screening.

“Running them all within this platform allows you to increase your inspection percentage significantly” without a major increase in staffing, said Jonathan Fleming, a former Transportation Security Administration official whose company, S2 Global, developed the software.

“Are you going to catch everything? No,” he said. “But I think you can do a very good job of significantly expanding your interdiction capability at a traditional port of entry with these technologies deployed.”

The government is racing to catch up to the fast-moving North American drug trade. The legalization of cannabis in some U.S. states has crashed demand for Mexican-grown bulk marijuana, driving traffickers toward hard narcotics. Cocaine seizures at the Laredo port of entry doubled last year, and CBP seized more than 190,000 pounds of meth in total at U.S. borders, nearly three times the amount confiscated in 2018.

“The honest truth is there’s no way to completely stop flow of illegal drugs as long as demand in the United States is high,” said Eric Olson, a global fellow at the Wilson Center in Washington who has tracked border security and drug trafficking issues for decades.

“The technology solutions to finding a half-ton of marijuana or bulk shipments of cocaine might be solvable, but when you’re talking about something like fentanyl that can be brought over in such small conveyances, it’s really hard to think it’ll have much success.”

“I’m not saying it’s pointless, but it’s not a panacea either,” said Olson. With more scrutiny on commercial cargo, traffickers will probably pivot to passenger vehicles, maritime routes, cross-border tunnels and other smuggling tactics, he said.