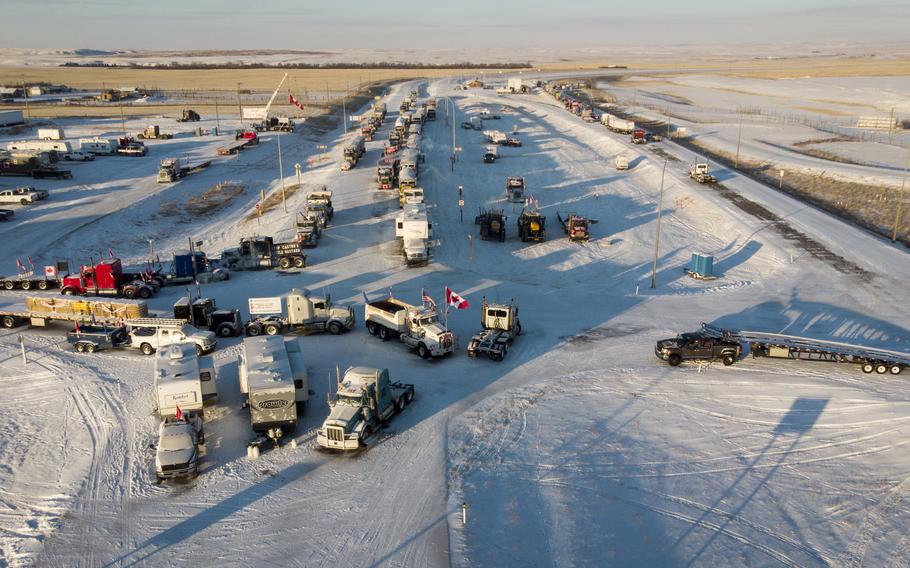 Canadian officials are denouncing an "unlawful" blockade of a border crossing between the United States and Canada and reports of violence, as a self-described "Freedom Convoy" of truckers and their supporters opposed to vaccine mandates continued its demonstrations for a fifth day.

Vehicles have blocked off access to the Coutts border crossing in southern Alberta since Saturday, creating traffic jams and disrupting the flow of goods and services - reportedly in support of those who arrived in the Canadian capital of Ottawa over the weekend to protest a federal coronavirus vaccine requirement for cross-border truckers and other public health measures.

"What may have begun as a peaceful assembly quickly turned into an unlawful blockade," the Royal Canadian Mounted Police in Alberta said in a statement, noting it would be taking action to clear the blockade under local laws that prevent interference with critical infrastructure, after attempts to negotiate with the protesters broke down.

Alberta Premier Jason Kenney said Tuesday that he had been told of "people aligned with the protesters assaulting RCMP officers" and "trying to ram members . . . later leading to a collision with a civilian vehicle."

Local outlets reported that the blockade is aligned with the Freedom Convoy, whose protests in Ottawa over the weekend sparked "several criminal investigations" into "threatening" and "illegal" behavior, after monuments including the National War Memorial were defaced and demonstrators displayed "intimidating" behavior toward police and others, including staff members at a soup kitchen for homeless people.

Some protesters carried Confederate flags, and at least one flag with a swastika drawn on it could be seen. Two men were charged with offenses related to their actions during the protest, according to the Canadian Broadcasting Corporation.

The Freedom Convoy continues to divide public opinion in Canada, where nearly 84% of the population has received at least one dose of a coronavirus vaccine.

Canadian Prime Minister Justin Trudeau, who earlier said the demonstrations represented a "small fringe minority," condemned protesters who displayed "symbols of hatred and division" over the weekend. Yet the movement as a whole has also garnered the support of several federal Conservative lawmakers, including party leader Erin O'Toole, who met with some protesters but not organizers and later condemned those who targeted monuments.

And a GoFundMe campaign for the Freedom Convoy organized by Tamara Lich - a former regional coordinator of "Wexit," a movement pushing for Alberta to separate from Canada - had raised nearly $8 million as of Wednesday morning. The page says that it seeks funds for fuel, food and lodging and that vaccine mandates are "destroying the foundation of our businesses, industries and livelihoods."

The Freedom Convoy has also attracted support beyond Canada's borders, as many countries debate whether it is time to scrap public health restrictions and live with the coronavirus. In the United States, Donald Trump Jr., the former president's eldest son, and Tesla founder Elon Musk have spoken out in support of the truckers.

Canada and the United States announced last year that they would require truck drivers entering their respective countries to be fully vaccinated. Canada implemented its measure Jan. 15, while the U.S. requirement started on Jan. 22. Most cross-border trade between the two countries occurs over land.

If Canada were to drop its rule, unvaccinated Canadian truckers would still be unable to enter the United States. The protest has snowballed into a demonstration against Trudeau, who was reelected in September with a minority government, and against coronavirus restrictions in general, which are imposed mostly by provincial governments.

Organizers said on the convoy website that its action has lasted nearly five days. The Canadian Trucking Alliance, an industry group, said Saturday that many of the people at the weekend's protests "do not have a connection to the trucking industry." The alliance said the vast majority of its members are fully vaccinated.

In Alberta, officials said they were "aware of other blockades that have appeared in the immediate surrounding area" of Coutts and that they expect interruptions at the crossing to continue for "some time to come."

Local lawmaker Grant Hunter, of the right-of-center United Conservative Party, sparked a controversy when he posted a photo from the Coutts border crossing over the weekend with the caption, "I brought the grandkids down to the Coutts border today to show them the importance of standing up for freedom and liberty."

In a follow-up statement on Tuesday, Hunter wrote that he exercised his "constitutional right" to support the protest and its goal of ending public health restrictions. "When I was there, the highway remained open to traffic and was not blocked off," he said. "I have stated my support to get back to normal in Alberta and move from pandemic to endemic."

"That being said, a peaceful protest is not a blockade that stops people from moving freely and so I ask those who are blocking the Coutts border crossing to let people through," he wrote.

"This blockade must end," she said.

The Washington Post's Jennifer Hassan and Adela Suliman contributed to this report.