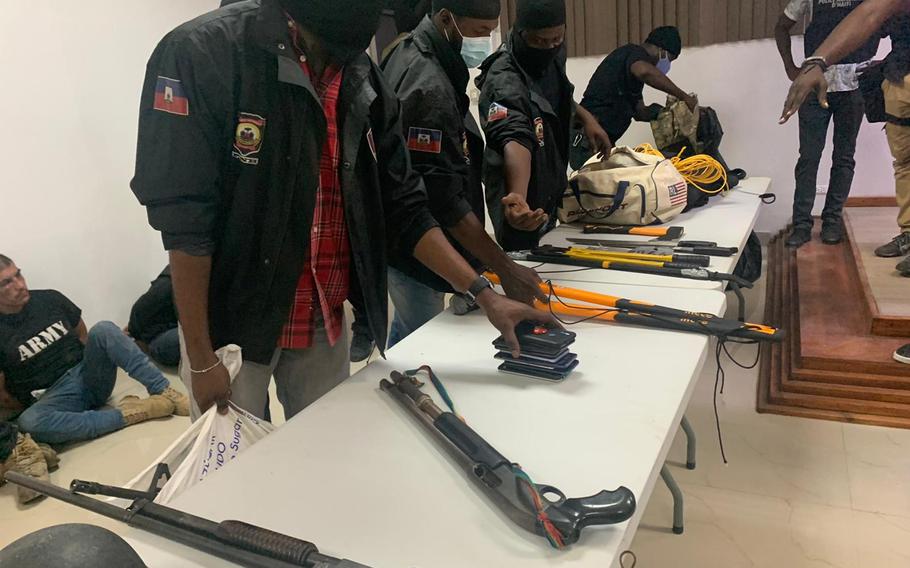 Haitian police display some of the weapons they say they took from men who were involved in the July 2021 assassination of President Jovenel Moïse. (Jacqueline Charles, Miami Herald/TNS)

(Tribune News Service) — Haiti’s investigative judge overseeing the inquiry into President Jovenel Moïse’s assassination is being removed from the case after failing to meet a legal deadline on bringing formal charges, signaling a significant delay in the prosecution of dozens of suspects being held but not formally charged.

Judge Garry Orelien had three months to summon witnesses and investigate the facts in the July 7, 2021, attack that left Moïse, 53, dead and his wife, Martine, seriously wounded. After failing to do either, Orelien earlier this month asked for an extension until Dec. 30. Bernard Saint-Vil, the dean of the Court of First Instance in Port-au-Prince and Orelien’s boss, said no.

Saint-Vil said in a letter Tuesday that an extension “will not allow the judge to complete his mission.”

The highly unusual move by a judicial head comes amid doubts about Haiti’s ability — or even its willingness — to prosecute those responsible for the brazen crime and criticism that the investigation into who killed the country’s own president is stalled. After an initial arrest of 44 people, including 18 former Colombian soldiers, Haitian national police officers have made no new arrests despite the issuance of wanted posters for several key suspects.

Three out of four suspects who were picked up in connection with the assassination over the past three months were detained after spending months in hiding in Haiti — not by Haitian authorities but by foreign governments.

“From the start of this investigation, he didn’t really do anything,” Pierre Esperance, the head of the National Human Rights Network, said about Orelien, who along with his clerk was the target of dismissal calls over allegations of unethical behavior.

Esperance’s human rights group had accused Orelien and his clerk of shaking down the owner of a company linked to the investigation and had demanded their removal from the case.

The same day that the dean of the courts wrote to Orelien that he will not extend his mandate on the case, Esperance’s group wrote to the Superior Court of Judges demanding Orelien’s removal, providing a list of complaints.

While some are welcoming Saint-Vil’s unusual decision to transfer the case to a new investigative judge, who will be the third given the task, others fear it can further set back the Haiti probe just as a parallel investigation in the United States is gaining momentum with three recent arrests. U.S. authorities, including the FBI and Homeland Security Investigations in Miami, are developing a case built on the suspected collaboration between a South Florida-based security firm and a network of Haitians, Haitian Americans and Colombians who initially sought to overthrow Haiti’s president but are now suspected of conspiring in his assassination, according to authorities.

U.S prosecutors earlier this month brought the first formal criminal charges in the case, accusing a retired sergeant in the Colombian military of conspiring to commit murder or kidnapping outside of the United States, and providing material support resulting in death, knowing that such support would be used to carry out a plot to kill the Haitian president. According to an FBI criminal complaint, the ex-Colombian soldier, Mario Antonio Palacios Palacios, said an “entire group of Haiti-based co-conspirators prepared for the operation” targeting the country’s president, including an initial plan to “capture” Moise at the Port-au-Prince airport upon his return from an official trip to Turkey in mid-June of last year.

“That plan did not go forward,” the FBI complaint says. “However, Palacios admitted that, by at least as early as July 6, 2021, he was informed by some of the co-conspirators that the plan was to assassinate the Haitian president.”

Palacios, 43, was intercepted by U.S. federal agents in Panama on Jan. 3 during the process of being deported to Colombia by Jamaica. After an initial appearance, he is preparing to head back to a Miami federal courtroom at the end of this month.

Another suspect, Rodolphe Jaar, a convicted drug trafficker, was detained in the Dominican Republic earlier this month and is expected to be brought to Miami any day, and a third, ex-Haiti senator John Joël Joseph, was arrested in Jamaica over the weekend and could soon be extradited to the United States as well.

Haitian authorities have said they plan to seek Joseph’s extradition from Jamaica, but the two countries do not have a treaty.

With fears mounting that Moïse’s murder is headed to the files of unsolved assassinations in Haiti, the U.S. probe may be the last, best hope for getting to the truth of what happened, which is nothing to celebrate, say those who have been involved in efforts to help reform the Caribbean nation’s dysfunctional justice system.

“It’s a step backward for Haiti, when you think of all the time lost and all of that money that was spent” on judicial reform, said William O’Neill, a human rights lawyer who in the past had been involved in justice and police reform initiatives in Haiti. “I think the international community has a lot to answer for; the Haitians obviously, too. But where are the donors, and what did they think was happening with all of this money?”

U.S. law enforcement officials have based their case on a jurisdictional argument that a key part of the planning that led to Moïse being held and slain inside his home in Haiti occurred in South Florida, according to information provided to federal authorities by Palacios and others. Federal prosecutors have also focused on violations of the Neutrality Act, which makes it illegal for an American citizen to wage war against any country at peace with the United States, including attempts to overthrow its government. Prosecutors have also considered potential violations of export laws regulating the shipment of weapons, ammunition and other military-like equipment, such as bullet-proof vests.

Meanwhile, the investigation in Haiti appears to have stalled if not unraveled.

At any moment there could be a prison break in Haiti, said Esperance, leading to the freedom of some, if not all, of the 39 suspects currently in custody. After six months, they have yet to be formally charged. Also, even if a judge is willing to take on the case, concerns about security could further disrupt the investigation. The first investigative judge assigned by Saint-Vil to oversee the probe quit less than week after taking on the role, citing safety concerns.

Brian Concannon, a U.S. lawyer who helped Haitian prosecutors try one of the few successfully high-profile criminal cases in Haiti’s recent history, said given the magnitude of the Moïse whodunit and the cast of characters allegedly involved, he can understand a judge needing more time.

But he also understands Saint-Vil’s decision to remove the judge from the case.

“No one goes to trial in Haiti in three months,” said Concannon, who was part of an international team of legal experts who helped Haiti successfully prosecute 38 army and paramilitary leaders for their roles in a 1994 massacre. The country’s Supreme Court overturned the verdict.

Concannon said while he believes that despite its limited technical capacity and issues with a broken judiciary, Haiti has the ability to adjudicate the presidential assassination. But he questions whether leaders have the political will.

“It seems to me that for months there has been no serious interest in getting to the truth in Haiti, at least by the people leading the country,” Concannon said.

It would be good to see Haiti take the lead and prosecute its most high-profile murder in a century, Concannon said. But he’s not optimistic.

“The government has spent most of the last 10 years dismantling most of its accountability system,” Concannon said. “This is what you get when you do that along with politicizing the police and undermining the judiciary.”