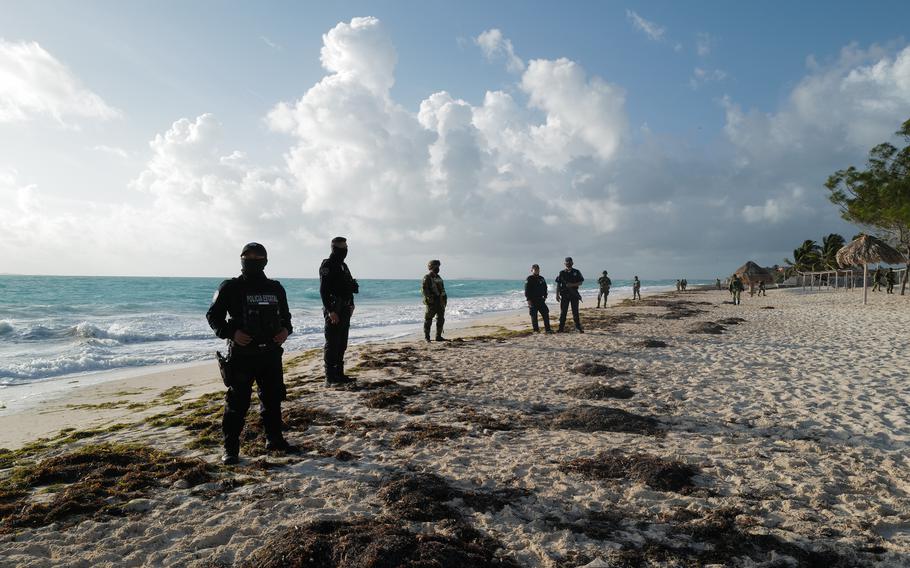 Mexican security forces oversee the destruction of an illegal establishment used by drug dealers on the outskirts of Cancún. (Kevin Sieff/Washington Post )

PUERTO MORELOS, Mexico - The trouble began, as it often does here, when tourists asked the hotel staff to help them buy cocaine.

It's a common enough request across Mexico's Mayan Riviera that the employees of the Hyatt Ziva knew how to accommodate their clientele. They called a few local drug dealers, according to security officials who investigated the incident.

But the dealers who arrived at the beachside resort outside Cancún last month came from rival cartels, part of the kaleidoscope of criminal groups who have converged on Mexico's busiest tourist corridor. Within minutes, shooting began. Security footage shows the attackers sprinting from the beach toward the $400-a-night hotel, and tourists in bathing suits seeking cover in hallways.

"It was more proof that the only reason the cartels are here is because of the enormous demand for drugs, especially among tourists," said Lucio Hernández Gutiérrez, the security chief for Mexico's Quintana Roo state. "It's a very difficult thing to stop." Security forces based in the Quintana Roo security headquarters watch live camera feeds from across the state. Authorities are responding to an uptick in violence that some worry could deter foreign tourists. (Kevin Sieff/Washington Post )

The hotel denies that its staff should be blamed for the attack.

"To suggest that our associates were, in any way, involved or bear a level of responsibility for an incident that began on a public beach is unfounded and without merit," said Dean Sullivan, a spokesman for Playa Hotels &amp; Resorts, which manages the Hyatt.

In recent weeks, some of the most famous destinations along Mexico's Caribbean coast have seen alarming displays of violence, still-rare collisions between the country's profound security problems and its glittering tourist attractions. Many have pointed to those incidents as illustration of Mexico's lawlessness. But Mexican officials say that critique fails to account for the way tourists' increasing demand for drugs has emboldened the cartels that sell to them.

In Tulum, a German and Indian tourist were killed by gunmen in October. In November, the shootout at the Hyatt spared tourists, but left two apparent cartel members dead. This month, gunmen arrived at a well-known Cancún beach on water scooters in another apparent targeted killing attempt. They fired their weapons before taking off into the Caribbean. No one was wounded.

In response to the series of incidents, Mexico this month launched a "Tourist Security Battalion," sending more than a thousand soldiers and police to patrol its most visited beaches and popular nightclubs and bars. Mexican authorities have also quietly explored ways to diminish demand for drugs among tourists without arresting them or discouraging them from visiting - a delicate balance.

Officials in Quintana Roo met recently with representatives from the U.S. Consulate and diplomats from more than a dozen other foreign countries.

"The message was, "We want tourism, but please remember that it's illegal here to buy drugs,'" Hernández Gutiérrez said.

The Tourist Protection Battalion has already arrested dozens of low-level drug dealers. Most are young men from surrounding states, some of the poorest in Mexico. 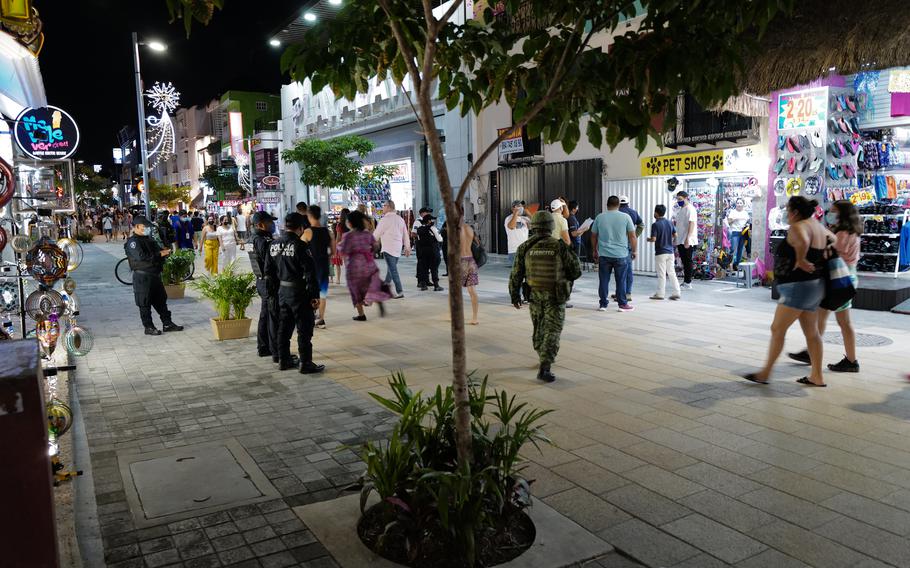 Those dealers are replaced almost immediately. Visitors walking down Playa del Carmen's Quinta Avenida, for example, are still greeted by a chorus of offers: "Hey Amigo, want some weed? Some coke?" Or the more subtle: "You want to party?" - with a finger pointing to a nostril.

"We know it's not easy to turn off the supply, as long as there is demand," Hernández Gutiérrez said.

Even some of the troops in the battalion mock the mission. Last week, one unit was sent to a four-star hotel in Cancún to provide security during a concert. One soldier recalled watching tourists get increasingly intoxicated.

"It seems like the Americans, when they come here, just want to get wasted, right?" he asked a reporter.

Adding to the volatility: In Quintana Roo, unlike other states in Mexico, no single cartel predominates. At least six criminal groups operate in the state's tourist corridor, including three with links to transnational trafficking organizations. The competition among them often turns violent, as groups fight over access to tourist hot spots.

In Tulum, the tourists who were killed in October appear to have been caught in a shootout between two local groups, Los Pelones and Los Compich. Authorities said gunmen from one group spotted a rival dealer in a popular bar called the Malquerida.

Those groups have been at the heart of rising tourist demand for drugs in Tulum, where an underground party culture has boomed in recent years, alongside wellness retreats and yoga classes.

"Working at the hotels here, you get used to being asked to help get drugs. You know, coke, MDMA, ketamine, all of it. We make the introductions to dealers because that's what the guests want," said a concierge at a well-known boutique hotel in Tulum. She spoke on the condition of anonymity because she worried about losing her job.

A party promoter in Tulum described the guiding principle as "making sure there's only one cartel providing drugs at a party, so there's no fighting between dealers." Security forces stand outside the Malquerida bar in Tulum, where two tourists were killed in October. (Kevin Sieff/Washington Post)

Quintana Roo has suffered 650 homicides so far this year, down from a peak of 866 in 2018, but a marked increase from earlier years. The majority of those killings, authorities say, were between criminal groups, and occurred miles from the state's tourist corridor.

On Nov. 27, a Cuban singer, Dayami Lozada, was shot dead by two gunmen on a motorcycle. Though Lozada performed in tourist bars, she was killed - like most of the victims - in a part of the city seldom visited by foreigners.

In Tulum, some of the city's most violent crimes occur in informal settlements, known locally as invasiones, where drug dealers live alongside hotel and restaurant employees, who struggle to find places to live because of soaring housing prices.

Mexican tourist officials and hoteliers have been quick to tell their guests that while Mexico can be violent, their hotels are safe.

"The first thing [we] explain is how far they are from the violent event guests might have seen in the news," said Miriam Cortés Franco, president of the Quintana Roo Vacation Clubs.

Unlike other states in Mexico, where gangs battle for control of territory so they can move drugs toward the U.S. border, coastal Quintana Roo is no longer a major thruway for narcotics. Its value is as a market: a bubble of foreign demand for drugs within Mexico. For that reason, officials say, Mexico's two biggest drug trafficking organizations, the Sinaloa Cartel and the Jalisco New Generation Cartel, both based on the other side of the country, have sent hundreds of foot soldiers to the state.

More than 18 million tourists visited the state between January and October 2021. More than 3 million of them were Americans. Because Mexico has imposed almost no pandemic-related travel restrictions, it has been a particularly attractive destination to those seeking a break from quarantines. Last Saturday was the second busiest day in the history of the Cancún airport.

Tourism provides more than eight percent of Mexico's GDP. In Cancún, the contribution is roughly 50 percent. 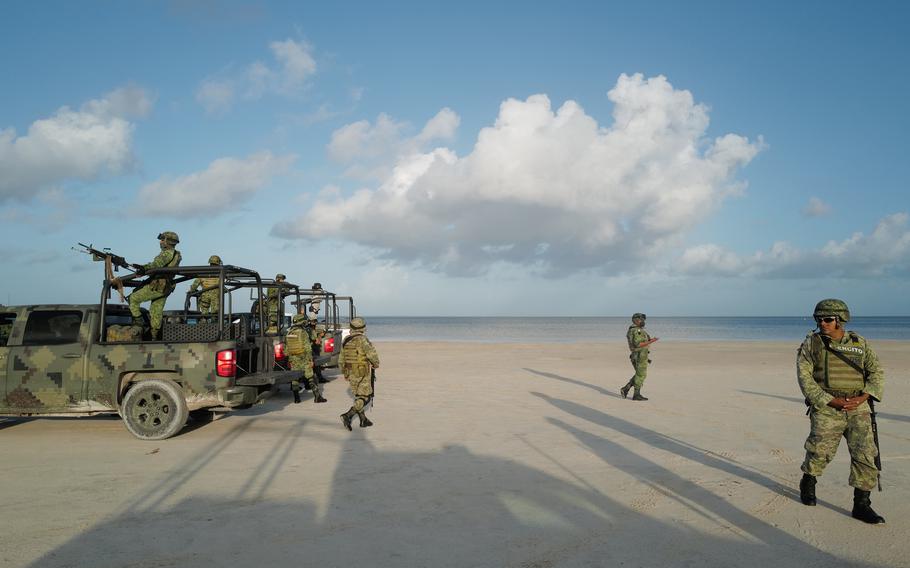 Members of the newly created Tourist Security Battalion, affiliated with Mexico’s National Guard prepare to launch an operation on the outskirts of Cancún. (Kevin Sieff/Washington Post )

Millions of tourists will experience cities like Cancún and Tulum with no indication of the violence that plagues much of Mexico. The country this year has recorded more than 30,000 homicides, for the fourth consecutive year.

Cartels are typically eager to avoid confrontations with tourists that will affect the local demand for drugs and draw the attention they're now getting from security forces. Earlier this month, a video surfaced of two tourists driving toward Cancún along back roads in the state of Tabasco when they were stopped by armed men, apparent cartel members.

After a few minutes of confusion, the armed men, realizing they had accidentally stopped two foreign tourists, tried to calm them down.

"No problem, no problem," one of the armed men said, and patted one of the tourists on the back, offering him a hug.

Elsewhere in Mexico, officials have seen the way violence can destroy an important tourist destination.

As killings surged in Acapulco, making the city the murder capital of Mexico, international tourism crashed. The number of foreign visitors fell 63 percent from 2012 to 2017.

Violence there, too, was caused in part by cartels fighting to sell drugs to tourists. As in Quintana Roo, the homicides were concentrated away from tourist hotspots, but the few incidents that did trickle into hotels and restaurants were enough to scare off many would-be visitors.

"We know how much depends on our ability to make tourists feel safe," said Andrés Aguilar, Quintana Roo's secretary of tourism.