(Tribune News Service) — The last 12 Christian missionaries kidnapped in Haiti and held in captivity for two months found their freedom by escaping, according to their charity group, Christian Aid Ministries, and several other sources.

In a first-hand account shared with the organization by one of the hostages, the group credited “the Lord” with saving them. One of the kidnapped missionaries described their plans to make their escape sometime between 1 a.m. and 3 a.m. on the night of Wednesday, Dec. 15, when members of the gang holding them changed shifts.

“We made preparations. We packed our bag with some of our belongings,” said Sam Stoltzfus, who works with Christian Aid Ministries and was one of the group of 17 missionaries kidnapped in Haiti on Oct. 16. “We were scared; of course we were scared.”

They packed water, moved their mattresses and found a way to open the door.

On the morning they escaped, Stoltzfus said, “our legs were like jelly; we were shaking.”

In a press conference on Monday, David Troyer, general director of Christian Aid Ministries, in Berlin, Ohio, said all of the hostages seem to be “doing reasonably well.” He said the charity, which is pausing its health, education and religious outreach in Haiti, “grappled for many hours over the proper course of action” after its workers were abducted for ransom. Troyer said many people reached out during the two months, including those who “provided funds to pay a ransom and allow the engaging process to continue.”

“We are not able to say anything further,” Troyer said. “You can ask but we can’t say. However, after many days of waiting, and no action on the part of the kidnappers, God worked in a miraculous way to enable the hostages to escape.”

U.S. officials, who had dispatched the FBI to Haiti the day after the kidnapping, have declined to provide any details on the circumstances surrounding the hostages’ freedom, and whether ransom amounts were paid. Haitian officials, which were in charge of the matter, are also remaining silent.

While Haitian gangs are known for releasing hostages on humanitarian grounds, usually kidnappings are resolved through private negotiations between the captors and relatives of those being held. In cases where there is a group, gangs have been known to release some after a payment is made in order to raise additional money.

It is unclear if that is the case in this instance. A source told the Miami Herald that the first two hostages, a married couple, were freed on Nov. 20 due to the illness of the husband and no money was paid. Three more were freed on Dec. 5 and the final 12 reportedly escaped on Dec. 16.

While the hostages were introduced in a photo during Monday’s press conference, and later in a video where they sang, they were not present.

During their time in captivity, the hostages were moved multiple times, the charity said.

Stoltzfus shared his story with fellow members over the weekend; a recording of his account was obtained by the Miami Herald. 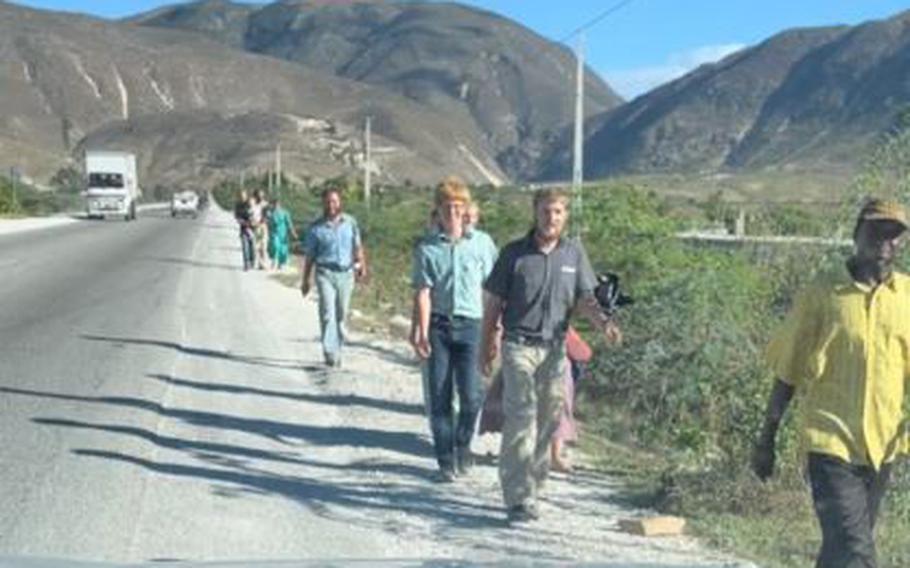 A video screen grab shows the arrival of the final 12 hostages walking along a road in Haiti on Thursday, Dec. 16, 2021, after they walked through the night to escape their captors. (Christian Aid Ministries)

Stoltzfus described the group walking between seven and 10 miles in the dark, hiking through thorns and briers in gang territory. The group included a married couple, a 10-month-old baby, a 3-year-old, a 14-year-old girl, a 15-year-old boy, four single men and two single women. The women wore flip flops and Crocs, and struggled at times as they followed the path of an irrigation ditch and at one point walked for two hours through a wall of cactus plants. They tried to follow “the North Star,” while praying for dogs and farm animals to be quiet as they struggled to find their way to safety and as far away as possible from the house where the gang held them.

Finally, they came upon a Haitian farmer and asked if he had a cellphone. He did not, but later pointed them in the direction of a house with a red door where two church musicians were practicing. After giving one of them the equivalent of $5 to go put minutes on his phone, Stoltzfus called the ministry’s country director and said, “Barry, we got out. The Lord delivered us.”

At this moment, they were near Route National 3 near Morne à Cabrit, at the edge of the gang’s territory.

“We walked through large Haitian villages without hearing a sound,” he said.

Stoltzfus said the escape had been in the planning for a while and the hostages had managed to loosen the door to make it easier. He described moving couches and having a worship service shortly before making their escape. That evening they also saw one of the most beautiful sunsets, he said, after storm clouds. “We were really rejoicing because we thought, with a little bit of rain, it would really help our efforts.”

He went on to describe their escape, saying he believes the gang members were awake when they fled. The group was taken out of the country on a Coast Guard flight to Florida. They spent six hours Friday with the FBI sharing their story.

Stoltzfus said when the group was first abducted they were scared, especially in the first hours. The gang that kidnapped them, 400 Mawozo, demanded $3 million for their release.

Days later, the gang’s second-in-command, Wilson Joseph, raised the ransom amount to $17 million — $1 million for each of the missionaries and their relatives, which included five children, the youngest of whom was 8 months old at the time of the abduction on Oct. 16, east of Haiti’s capital. 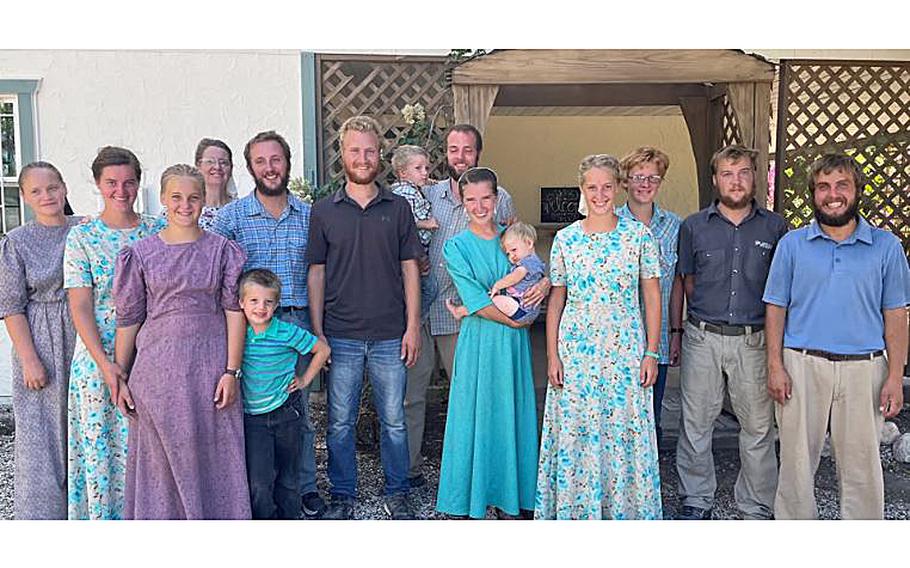 A video screen grab shows 15 of the 17 hostages in Haiti on Thursday, Dec. 16, 2021, before they returned to the United States. The 15 include the 12 who escaped and three more who had been released prior. (Christian Aid Ministries)

The group of 17, which included a Canadian who had been driving the vehicle on the day of the abduction, took place while on a visit to an orphanage supported by Christian Aid Ministries. Two weeks earlier, the organization had sent an email to the missionaries in Haiti seeking an update on the orphan program, Stoltzfus said.

The visit to the orphanage took place on “a beautiful day,” he said. “We piled into our little bus, a 15-passenger van… before that we had a word of prayer for our safety and protection.”

Stoltzfus said he knew there were gangs in Haiti, because he had lived in the country for three years. But he never thought he would be a victim of kidnapping because the abduction of Americans had been unheard of.

“I had never heard of Haitians... kidnapping Americans. They are kidnapping in Haiti every day (but) a lot of them are other nationalities,” he said.

He confirmed their captors were members of the gang 400 Mawozo, which that Saturday had blocked the main road connecting Port-au-Prince and the border leading to the Dominican Republic and the Central Plateau. The gang was using a Land Cruiser ambulance, a pickup truck and another vehicle to abduct unsuspecting motorists.

The missionaries, who had just left the orphanage at about 1 p.m., had no idea what was awaiting them. When they saw the roadblock and one of the gangsters running down the road with a rifle, Stoltzfus said he thought it was the Haiti National Police. Soon, he realized it wasn’t the police but “this gangster.” 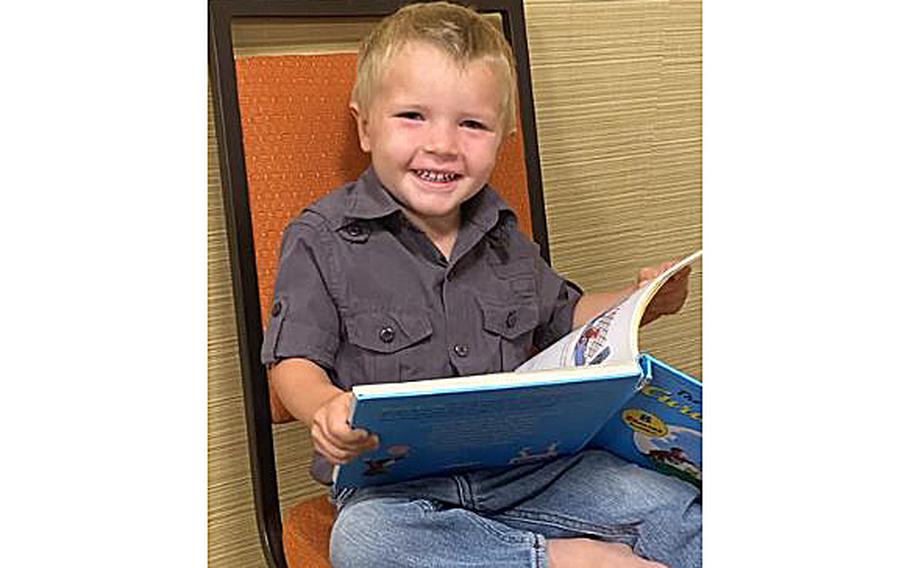 A video screen grab shows one of the 12 escaped hostages, a 3-year-old boy, smiling as he looks at a book on Dec. 18, 2021, after returning to the states. (Christian Aid Ministries)

They attempted to turn back in the direction of the orphanage.

“Suddenly another pickup truck with four gangsters on the back with huge assault rifles, were coming to pass us on the left,” he said. “The bus couldn’t go as fast as their vehicle; they started to come around us... I thought they were going after someone else.”

They were surrounded by gang members and blocked off by vehicles.

Stoltzfus said one of the gang members jumped into the driver’s seat and began driving. The group was initially taken to a parking lot that appeared to be some kind of staging ground, and later were taken down another winding round where they later met the gang’s second-in-command, Joseph, who gloated over the new hostages.

It was Stoltzfus who sent out the initial messages on a WhatsApp group confirming the kidnapping. He was scared, he said, because he didn’t know if the message would help or make matters worse. The chat group, used to report anything of importance happening in Haiti, has about 200 members.

In their captivity, the group passed the time praying together, he said. They were kept together in a small room, about 10 by 10 feet, in a small house. There were few mattresses, and the missionaries took turns standing and laying down. Toilet paper was also scarce.

Eventually, the kidnappers allowed the hostages to go outside. They fed them hard boiled eggs, generally half per person, and Haitian spaghetti for breakfast. Dinner consisted of rice and beans with fish sauce. Baby food was provided for the small children.

Weston Showalter, spokesman for the ministry, said although the hostages “were threatened on multiple occasions and wondered if death was near in some cases,” none were hurt or physically abused by the kidnappers.

Stoltzfus said they were confident that if God wanted them to be freed, he would “set it up and put the details in place” so it could happen. “So we started making preparations.”