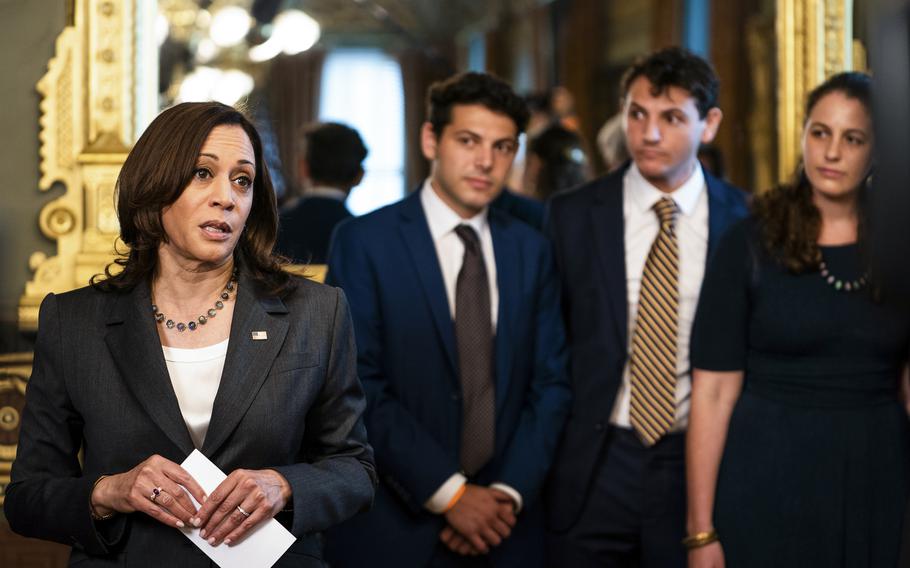 WASHINGTON — Vice President Kamala Harris on Monday announced new investment commitments from an array of private companies to help address the root causes of migration from Central America, aiding her efforts on a daunting task on which she has been longing to show progress.

With the pledges from companies including PepsiCo, Mastercard and Cargill, Harris' office said such entities have now committed to invest $1.2 billion in the poverty-stricken and violent region since she issued a "call to action" for private-sector help in May.

The announcement comes amid staff departures and other reports of turmoil in Harris' office. Her portfolio includes several challenging assignments, including a charge from President Joe Biden to address the root causes of migration at the southern border during a large spike in illegal crossings.

"Six months ago, we had a commitment of $750 million. Today we have a commitment of over 1.2 billion," Harris said in remarks Monday afternoon at a meeting with chief executive officers.

She added, "This is not about us coming in and telling anyone what they should do. It is about being partners and assisting and helping to facilitate the natural desire of the people in these nations. This is important work. This is good work. I think this reflects the best of who we are as the United States recognizing our responsibility as neighbors to these countries in the Western Hemisphere."

Ahead of the meeting, Harris' office detailed new investments from seven companies.

It said, for example, that PepsiCo, the global food and beverage company, would invest $190 million in northern Central America through 2025, including improvements to its manufacturing plans in the region. The company already has a long-standing presence in Guatemala, El Salvador and Honduras, including a regional manufacturing hub in Guatemala.

Harris' office also said that Cargill, a global food corporation, would invest an additional $150 million in the region with the aim of improving "farmer livelihoods and building economic resilience" in Honduras, Guatemala and El Salvador.

Meanwhile, Parkdale Mills, one of the largest providers of spun yarns and cotton consumer products in the world, plans to spend $150 million to build a new yarn spinning facility in Honduras, according to Harris' office.

Other investments are being announced by CARE International, Grupo Mariposa, Parkdale Mills, JDE Peet's and PriceSmart.

In addition, three other companies that announced initial investments in May — Mastercard, Microsoft and Nespresso — are announcing further plans in the region.