Canada weighs vehicle origin rules as next US trade flashpoint 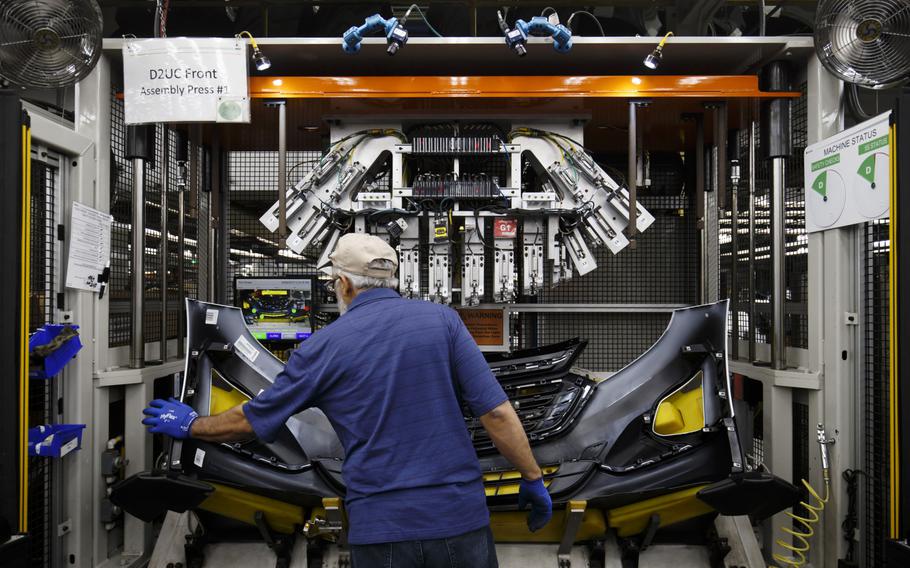 An employee assembles a bumper at an auto-parts plant in Guelph, Ontario, in August 2018. (Cole Burston/Bloomberg)

Justin Trudeau appears set to add another item to his government's growing list of trade grievances with Joe Biden's administration.

Canada is leaning toward forming a common front with Mexico in a fight with the U.S. over how to interpret rules governing the origin of vehicle parts. The rules, which are part of the North American free-trade agreement overhauled under Donald Trump, set content requirements for cars shipped across regional borders.

Both Mexico and Canada believe the trade deal stipulates that more regionally produced parts qualify for duty free shipping than the U.S. is allowing. Mexico requested formal talks on the issue in August that Canada joined as an interested third party.

"Trilateral consultations regarding the application and interpretation of certain elements of the rules of origin that apply to motor vehicles under the Canada-United States-Mexico Agreement did not produce a resolution," Alice Hansen, press secretary to Trade Minister Mary Ng, said late Friday.

Mexico's economy minister signaled last week she is prepared to escalate the dispute over rules of origin. The Trudeau government "will always stand up for our auto industry," Hansen said, and is considering its next steps.

Joining with Mexico in calling for an arbitration panel under the new NAFTA would add another strain to Canada's relationship with the Biden administration. Trudeau went to Washington earlier this month hoping to persuade the U.S. president to alter his proposed Buy American tax incentives for electric vehicles, but could not secure a compromise.

There are also tensions over energy. Biden, who Trudeau had hoped would be less confrontational than his Republican predecessor, began his presidency by canceling the Keystone XL pipeline, prompting Calgary-based proponent TC Energy to seek $15 billion in compensation under NAFTA last week.

Canada and the U.S. also disagree on Line 5. The Enbridge oil and gas conduit under the Great Lakes has drawn the ire of Michigan's governor, an ally of the president's, who wants it shut down.

The two countries are even at odds over potatoes, after a fungal disease halted shipments of the crop from the Atlantic province of Prince Edward Island.

The virtual session - which included executives from the Canadian divisions of General Motors, Honda, Stellantis, and Toyota, as well as Canadian parts giant Magna International - marked a return to the broad coalition strategy the Trudeau government employed after Trump threatened to rip up the original NAFTA.

"In response to immediate pressures, Canada is taking a 'Team Canada' approach by rallying Canadian industry and stakeholders to build consensus among NAFTA parties to come up with an executable game plan," Allam said.

Taking the issue through formal NAFTA mediation is the most likely option for Canada and Mexico, should they pursue the dispute. An orderly resolution, however, may even end up being a positive, according to Allam.

It would signal that "the largest free trade region in the world is resilient," he said.