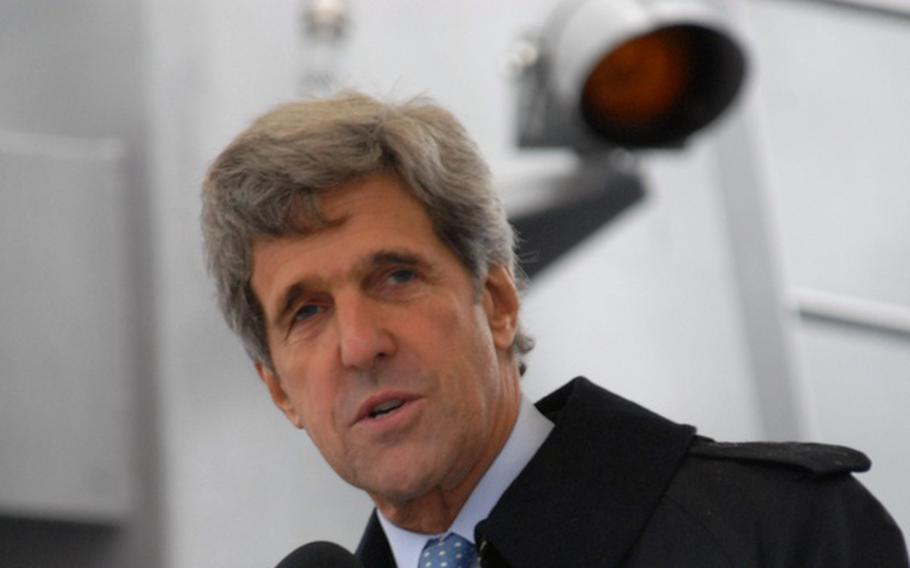 The former rebel commander once sat across a table from Secretary of State John Kerry. He signed the historic peace deal that ended Colombia’s 52-year internal conflict. (Jane Campbell/Navy)

BOGOTÁ, Colombia — The former rebel commander once sat across a table from Secretary of State John Kerry. He signed the historic peace deal that ended Colombia’s 52-year internal conflict. He accepted responsibility for kidnappings and killings by his guerrillas, apologized to the victims, became a member of a legal political party and was elected a senator in the country’s Congress.

But to the U.S. government, Pablo Catatumbo is still a terrorist.

Five years after the Revolutionary Armed Forces of Colombia turned in its weapons and committed to peace, the United States continues to list the group as a Foreign Terrorist Organization. Catatumbo and dozens of his former comrades remain “specially designated nationals” — people connected to terrorism, drug trafficking or countries that have been targeted with sanctions by the U.S. Treasury.

As a result, he was forced to step down as legal representative of his political party and to withdraw from a coffee start-up that helps former combatants reintegrate into society.

U.S. officials in Colombia are prohibited from working with former FARC combatants such as Catatumbo — and sometimes, from being in the same room with them.

The impact is far-reaching. The FARC’s inclusion on the State Department’s list of Foreign Terrorist Organizations restricts U.S. officials from funding programs aimed at advancing the peace accords in which former combatants participate or benefit. The United States has poured hundreds of millions of dollars of aid to support the peace accords, but none of it goes toward a cornerstone program to incentivize replacement crops for coca — the base ingredient of cocaine - or a formerly FARC-led effort to destroy land mines.

During the peace negotiations in Havana, Obama administration officials said in 2015 that if the FARC met the criteria for delisting, the United States would seriously consider it, according to Bernard Aronson, who was the U.S. special envoy to the peace process.

But five years after the accords were signed, U.S. sanctions continue to create barriers to the full reintegration of ex-FARC members, according to interviews with about two dozen former combatants, U.S. and Colombian officials and others. By keeping the FARC on the list, critics say, the United States could undermine the peace it vowed to support.

“It’s a big contradiction,” Catatumbo said. “We signed a peace accord that the U.S. government backed.

“The U.S. gave a great deal of support to the war. They need to support the peace, too.”

The FARC’s listing is now under review, according to the State Department. Each designation is subject to a review every five years, but the last time the department formally assessed the FARC listing was in April 2015. The process was delayed in part by the pandemic, a State Department official said.

The U.S. Embassy in Colombia declined to comment. U.S. Ambassador Philip Goldberg told a Colombian newspaper in February 2020 that the FARC remained on the terrorist list “because, as we know, there are some dissident groups still involved in narcotrafficking and violence.”

Juan Manuel Santos, the former Colombian president who in 2016 won the Nobel Peace Prize for his work negotiating the peace accords, said the United States “should have taken the FARC off some time ago.” He asked Washington to take the FARC off the list during the negotiations, he said, and expected it within two to three years.

“The FARC gave up their arms and complied with a justice system and to a peace process and they’re still on the list,” Santos said. “This is an outright contradiction.”

Implementation of the peace accords has stalled under President Iván Duque, who has been highly critical of a deal many say was too generous to fighters who committed atrocities during the country’s conflict.

At its peak in the late 1990s, the FARC, flush with cocaine profits, boasted nearly 20,000 fighters and controlled as much as a quarter of Colombian territory. The insurgents terrorized the country with kidnappings, bombings and other attacks. More than 220,000 people died and millions were displaced from 1964 to 2016.

Catatumbo and other former members of the FARC secretariat have been charged by the postwar Special Jurisdiction for Peace with war crimes and crimes against humanity, kidnappings, murder, forced disappearance, torture, sexual violence and forced displacement. In a joint statement this month, they accepted responsibility for kidnappings and apologized to the victims and their families.

The Special Jurisdiction for Peace has also filed charges against top Colombian military leaders for allegedly kidnapping and killing noncombatants and falsely labeling them as combat deaths. At least 6,402 Colombians were killed between 2002 and 2008 in the scandal known as the “false positives” case.

Lawyer Diego Martínez represents the FARC before the Special Jurisdiction for Peace. If former combatants are unable to fully integrate into society, he said, “it is easy for them to go down other paths in a country where illegality reigns.”

One adviser to ex-FARC combatants said that if the United States wants access to essential sensitive information such as drug-trafficking routes or arms purchases, it needs to be able to talk to the people who know these details best.

Steve Hege, deputy director of the Latin America program at the United States Institute of Peace, recalled two important meetings about peace and security in which a former FARC member entered the room and U.S. Embassy staff members stood up and walked out.

Hege said a meeting between the ambassador and former FARC commander Rodrigo Londoño “would be fundamental.” It would send the message that “this insurgency is over,” he said. “We don’t agree with you, but we want you to participate. We want you to have candidates. And we don’t want you to be killed.”

In late 2016, Aronson said, after the peace agreement was signed and Donald Trump was elected president, senior Obama administration officials discussed whether the FARC had met the criteria to lift the Foreign Terrorist Organization designation.

But several obstacles stood in the way. The FARC had turned over its weapons to U.N. supervision, but they had not yet been destroyed. Officials were reluctant to make a major foreign policy decision so close to the transfer of power to a new administration. “Basically, we ran out of time,” Aronson said.

The European Union removed the group from its list of terrorist organizations in November 2017.

“It’s a question of keeping your word,” Aronson said. “Obviously, a formal analysis would have to be made, but based on the facts today, it’s hard for me to believe that one could make a credible case that the FARC should be designated as a foreign terrorist organization.”

A State Department official said it’s not unusual to wait several years to remove a demobilized terrorist group from its list. But if circumstances change, the department may delist a group before the five-year review.

The Duque administration has not pushed the United States to remove the designation.

“The lists only restrict a few areas of support, which has left us with a very wide scope to work together on many other fronts of implementation,” said Emilio Archila, Duque’s presidential adviser for stabilization and consolidation. He stressed that the decision is up to the United States, not Colombia. While U.S. support has been essential to the implementation of the peace accords, Archila wrote in an email, “the leadership is our responsibility.”

It is a violation of federal law for any U.S. representative to knowingly provide a foreign terrorist organization with “material support or resources,” which can include financial services, lodging, transportation or advice. Lawyers for U.S. officials in Colombia have applied a strict interpretation of “material support,” even occasionally prohibiting U.S. Embassy or USAID staffers from buying a cup of coffee for a member of Comunes, the rebranded ex-FARC political party.

A year after the signing of the peace accords, the U.S. Embassy requested waivers to the designation in two areas: prenatal and postnatal care for ex-FARC women who became pregnant; and education and vocational training for people recruited as children to be FARC soldiers.

Some U.S. politicians and members of civil society have urged the government to go further. A congressionally mandated report from the Western Hemisphere Drug Policy Commission in December urged the United States to “facilitate assistance to demobilized rebels in post-conflict zones.”

As Secretary of State Antony Blinken visited Colombia this week, advocacy groups asked him to remove Comunes from the list.

“It creates the narrative that the only actor that has committed crimes against humanity is the FARC,” said Gimena Sánchez-Garzoli of the Washington Office on Latin America, one of the groups that made the request. “It takes away the state responsibility for all the crimes they committed.”

A year after the peace accords, an organization here announced a pioneering idea.

In an effort to clear millions of square meters of land peppered with antipersonnel mines from Colombia’s war, a group called Humanicemos DH - “Let’s humanize” - sought training for former FARC members in demining. It claimed to be the world’s first demining organization made up of former combatants after a peace process.

But the only entity authorized to accredit demining efforts in Colombia was the Organization of American States. When the U.S. Embassy learned of the role of former FARC combatants, it asked the OAS not to grant accreditation to the group.

The move upended some of the group’s key partnerships and put its work at a standstill for years.

“The United States is one of the main funders of mine action in the world,” said Germán Balanta, a technical manager for Humanicemos DH. “But we have not received a peso from them because of who our bosses were.”

It took more than four years for the group to announce, this month, its first successful demining project. Twelve former combatants cleared a patch of land belonging to an Indigenous community - in a department once controlled by the FARC.